AYODELE FAYOSE ATTACK ON A JUDGE, THE EMERGENCE OF AWFUL PRECEDENT 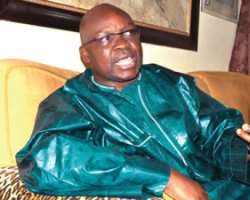 Democracy is totally of different tint to anarchy, but anarchy has mixed with a celebrated concept of government. It is laughable that AYODELE FAYOSE who will ascend the stool of the number one citizen of Ekiti State could mobilize his thugs, invaded the Court of Law when his case was going on and rained heavy beating on the presiding Judge and other staffs of the court. One wonders if it is not madness for a person who receives shade from a tree to cut such only tree. One wonder who's FAYOSE expect to swear him in, when he unprecedentedly violate the sanctity like a mad man of the Court of Law.


What one expects as a reaction to such a bad precedent is a deterrent, nothing fit-in except deterrent. To let everyone involved to face the consequence, including AYODELE FAYOE. It is the only way the garment of honour of the judiciary tore can be replaced.


I will be extraordinarily disappointed if the politicians are able to dilute the due reaction of the Judiciary in this instance. The desperate politicians do not realize the kind of destruction they do to this country on a daily basis all because they want to hold on to power. The Police in many instances are one-sided, they romance and act favourable to the wish of President and his party, likewise, our judiciary is highly romanced and left independent. Our democracy is frustrated; it is held by the egocentric and power drunk people that lack conscience. When at the helm of affairs are people who are not transparent and not accountable, and desperate politicians, sure, democracy is in danger.


The Judge as a person and the NJC and NBA as body need to realize that it takes a huge task and lot of strength and years of training and experience to ripe and reach the stage they are. One will not expect these corrupt politicians who occupy political post to dictate or influence the Judiciary. The wise men cannot be guided by mad man, every Judge is a wise one and the kind of politicians we have, the one that pursue and retain power by all means act like mad man. Our judge will become hated and provoking like the politicians if they are allowed to influence their decisions.


The politicians in this country act like mad ones, what is paramount to them is the power and anything may happen in the course of seeking for power. And that is why the NJC and NBA must resist strongly all attempts by the politicians to turn the almighty judiciary to their political tool.


It is important to speak loud here, the President of Nigeria, and the Governors are also politicians that are most likely want to influence the Judiciary… Our judiciary in the past has seriously suffered from unwarranted intrusion of these politicians in Nigeria. The day our judiciary allows Governors and President to intrude and influence their world “Judiciary”, they will successfully blot the image of this arm of government and subject the judges to an unprecedented rejection, may the day never come when our judges will be stone by the masses.


The unhealthy struggle among the politicians and the political parties is not new, the PDP and APC are rivals and one will expect series of political loggerhead, meanwhile, our Judiciary in not part of their game, it is not a political party, it is the last hope of a common man, it is a specialized arm of government that adjudicate on dispute and give life to the law of the country. It is a podium of highly learned jurists, and the atmosphere and the culture of the court is a total respect to the judiciary, its pronouncement and the judges and Justices as matter of law must be respected. The political struggle may be going on among the politicians and must not extend to the Judiciary; it must insulate itself from infiltration of the politicians because every Judge and Justice will either be rejected or respected by the society base on the image the Judiciary preserves for itself.


To the action of FAYOSE, there must be a deterring reaction from the Judiciary as a body and only persons who are enemies of democracy will look at it from political perspective. As a governor elect, much is expected from him, and a civilized person will agitate in a civilize manner. As he was challenged in the Court of Law by “E 11”, the reasonable response is to present his defense in the court. Even where he is not satisfied with the ruling of the trial court, he can always appeal and appeal. Stampeding the court proceeding, and such a serious assault of a Judge is the highest level of criminality and must not go unpunished.


The politics of no conscience is very common to Nigerians, no wonder; politics regulate the reasoning of some Nigerians. I don't think it is a thing to celebrate is the high level of impunity of Ebele Jonathan Administration, to be frank; to celebrate the fact that, for political gain our president will maneuver the Judiciary and FAYOSE will escape the justice is tantamount to democratic derailment. Any person or group who may dishonor our Judiciary like FAYOSE did must be punished and other must be deterred.


This act of violent attack and impertinence of sacred arm of government by FAYOSE is a strongest blow to our democracy. The Governor elect walk majestically in to the court premises, followed by thousands of hoodlums, while the Judge was addressing him to control his follower, he watched them as they pound the Judge and destroying the Court. He cannot be separated from the crime committed under his watch and command and in his presence.


It is expected of the NJC and NBA to deter the likely reoccurrence of this horrendous attack on the Judiciary, they must insulate themselves from political influence at the expense of survival of democracy and Rule of law.

Disclaimer: "The views/contents expressed in this article are the sole responsibility of the author(s) and do not necessarily reflect those of The Nigerian Voice. The Nigerian Voice will not be responsible or liable for any inaccurate or incorrect statements contained in this article."
Articles by Abdulsalam Abdulfatah Liberty
24-12-2014  Buhari And Jonathan: A Contest Between Integrity And Corruption8-5-2014  The “boko” Just Record A Goal: Dg. Good Governance And Leadership Assessment Initiative (goglai)9-3-2014  Sanusi Lamido’s Suspension: The Unguarded Use Of Power By Gej11-2-2014  Iyiola Omisore And The Guba Race In Osun State3-2-2014  The Missing Dog In The Political ForestMore...