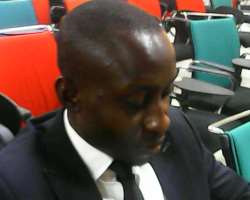 I am use to this style, why do I roam about when there is tiny time and the aim here is to expose my view to the large world. Boko Haram, as we have it in Nigeria is a terrorist organization like we have it in Pakistan, Iraq, India, Somalia, Kenya, Afghanistan, China, and Unites State of America. They have been striving to suck blood and to cause pandemonium and instability in Nigeria. The weak government of ours is now exposed by the deadly 'Boko', the kind of government headed by mediocre as president and associate. Since the State government has failed and the Federal Government is confused, what is the best goal of terrorist?

They want by all means to cause tremor, fear and instability that will be felt by the government and the citizens. Just same, the goal they have just recorded. It is a quantum victory for BOKO. The President only gives empty assurance while his trumpet blowers, Roben Abati and are busy exploiting their sweet mouth to present their government as a reliable one.


I sampled the opinion of intelligent men about the recent reaction to the kidnap of the two hundred girls by Boko and saw my perspective as a common one. Like it is suggested by some people that our collective effort is needed in the search for the kidnapped girls, I considered this as an awkward opinion, how limited is what we can do in the matter of security? Very little or nothing we can do except to unnecessarily stressed ourselves in the scorching sun all in the name of pressurizing the government.


Is it the right time now to disturb the street to pressurize the dull and sleeping government headed by mediocre who is surrounded by noise makers? The protesters ought to have come on street for long considering the number of people that were massacred by this terrorists group.


It took good time before the school was invaded and the school girls packed into a lorry and speed sluggishly along the desert part where you can see afar due to the peculiarity of the plantation. Where was the Commissioner of Police of the state? Where was the governor? Sure! We have incapable hands in every strategic point of leadership from head to toe.


We have many presidential jets secure for unimportant adventure by our mediocre president but we have not subscribed to Drone which is capable of locating Boko Haram from the sky in the day and night, this is necked backwardness on the part of our unreliable Armed force.


I am not without the option of what our President should do as a matter of urgency, first and foremost, the kidnapped girls must be found as soon as practicable, the failure which he either resign of he be impeached.


At this juncture, conscious large number of Army, so large to dominate the affected states and the border of this country should be deploy to search for every ant hole to fish out the beast in human skin call Boko Haram.


By now, every weapon such as Drone which is one of the latest war weapons good for fighting terrorism can assist in the search of the missing girls and to put stop to the insurgency should be secure by the Nigeria government, and all these should be done with immediate effect.


I am surprise as the situation degenerated to this level, since we have leaders (President and Governors) who are the least intelligent among us. Cannot think classically and neither can they think ruggedly, radically and creatively. For now, our world is not better than the state of nature until the almighty God bless us with good and great leaders.

Disclaimer: "The views/contents expressed in this article are the sole responsibility of the author(s) and do not necessarily reflect those of The Nigerian Voice. The Nigerian Voice will not be responsible or liable for any inaccurate or incorrect statements contained in this article."
Articles by Abdulsalam Abdulfatah Liberty
24-12-2014  Buhari And Jonathan: A Contest Between Integrity And Corruption12-10-2014  Ayodele Fayose Attack On A Judge, The Emergence Of Awful Precedent9-3-2014  Sanusi Lamido’s Suspension: The Unguarded Use Of Power By Gej11-2-2014  Iyiola Omisore And The Guba Race In Osun State3-2-2014  The Missing Dog In The Political ForestMore...