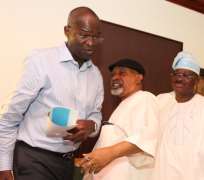 Senator Ngige whispering to Gov Fashola to deport any body he dis-likes to Anambra, so that he can use it in his campaign speech in Favor of APC.

WHAT a wonderful relief , I was thinking that my idenna may be having problem with his speech.

As for 2 whole years in Senate Chambers he was unable to find a voice to say NAY or YEAH,sorry I did not add that he never moved a motion,seconded one or proposed one.

Fast Forward,when Awusa were bombing Igbo men in Kano Parks, the SEALED lip of a Senator did not speak out ,maybe because of the new pact with AWUSA and Yoroba that projected that ALAIGBO must be deported ,harrased,imprisoned and dealt with ,which my Sinator seconded .

So when he lost his voice on all the atrocities against Ndi igbo in the North,i though maybe he has speech problem.

Moving on !!! when Governor of DEPORTATION kidnapped ,kept for 6 solid months and using them as Guinea pigs, then deported them in middle of Harsh night and dump same ,sorry not same because the Governor of Deportation lied that he only Kidnapped 14 ,but he deported 72 to Onuicha.

Yet,this speech impeded Sinator never spoke not even whimper ,,,sorry again my Bad ,he actually found his voice,,,HE SAID AND I QUOTE "NDI IGBO DESREVED IT".

Now, truly i can see that he is not speech impeded, but aruru ani to the core ,,,he is warrior in his own home.

JEEEEEEEEEEEEEEEZZZZZZZZZZZ somebody should please drag him aside and show me how to feel shame, which state is he trying hard to talk about ?,same state he was unable to project at the Sinate of which other one ?