Nigeria As Pastors Have Dethroned God 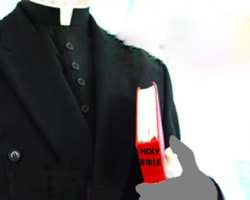 Don’t be surprised that I am going solo, the unpopular way. Truly, the socio-political events in Nigeria can keep a writer as busy as a bee in an active apiary. But, my pen will not talk about the biaframania that is burning like hellfire in the South-East. It is funny how people just wake up and realize that they are marginalized because an “Aboki” won election. Bad losers indeed. Marginalization my foot! I have visited the 19 northern states and the South-East States (Apart from Ebonyi) and lived with my Anioma brothers for a year in Delta State. So, when it’s about marginalization, pity the North, Ndi-Hausa.

I also care less about the “un-baba-nish” noise of the wizard of Otta Baba OBJ have been dishing out like “kunu Zaki”. Don’t expect me to write about my girlfriend and her friends from Chibok who are currently running their PhD’s in forced marriage and rape until December 31st when Buhari’s magical wand expires. Why should I invoke the wrath of Fani thunder who has been busy setting fire on the keg of gunpower with his articles. For the ragtag bunch of Arewa created bloodthirsty lunatics and monsters in the North-East that have found a criminal way of adoring religious barbarism in a toga of political brutality, alas for them (haramists) for my pen will remember them soonest. It’s a promise.

It seems Tinubu, the Oba of politics 101 is not aware that Amala is now a scarce commodity in south-west and that is why his people are threatening to pack and leave Wazobia because Fulani marauders visited one of their own. Can Chief Olu Falae swear by Amadioha left foot and declare publicly the amount of naira and kobo he kidnapped as the SFG, including the Ghana-must go he kidnapped as part of Afenifere support for the shoeless village fisherman who is licking his political wounds in Otuoke.? The Fulanis are also wise, that’s why they did not come to kidnap me.

The boys wanted a fraction of Chief Olu’s loots. So, why is he disturbing our peace? Who knows how many drums of panadol sai Baba have consumed since his tenancy in Aso-Villa. Walahi! uneasy lies the head that wears the crown especially in Nigeria where everybody knows the job more than the president yet refuses to contest, so I will let “Baba go-slow” rest a while.

I am thinking outside the box, thinking about the sons of deception that have lost their voices since their pay master returned to Otuoke. No more brown envelops, no more Ghana-must-go bags and national prayer in Jerusalem because the God in Nigeria is deaf so the prophesy have stopped coming. Put bluntly, Chinua Achebe saw it coming decades ago, “things are no longer at ease” for the flamboyant pastors that were feeding fat from the national cake.

I know that several missiles will fly towards me. Many will hasten to announce the arrival of another Don Brown but that will not stop a moving train. It is a sad tale, but it must be told. Nigerian pastors, through their actions and inactions have made our brand of Christianity, shamelessly unchristian. Far back in 1966, Sunday Mbang subscribed to the idea canvassed by this writer when he opinionated in an interview with the News Watch Magazine that “Christianity came in the early 19th Century but it has not taken root in the lives of Nigerians. If we are true Christians, we will not have all this”. We still bunch of church goers and very few Christians. Tunde Thomas opined that a majority of people in the clergy now are devils.

With the magnitude of fraud and other criminality going on in Nigerian churches under the direct supervision of pastors (men of God) one can risk being accused of using Burukutu for breakfast for agreeing with Thomas Peine that “my mind is my own church”. Before these merchants in the temple will adorn me with a toga that is not mine because they have a 360 degree hatred for anything that extols reason but romances “churchianism”, a fellow-follow doctrine that relegates common sense to the background and elevates unquestioning loyalty to them as a dogma, I hasten to declare that I am not an atheist. At this era where the Bible has become the highest defence council, these pastors can turn the bible upside down and quote, mis-interpret any verse to serve their mundane and selfish interests.

We must be careful about the way we swallow the rubbish that oozes out from criminals wearing roman collars. Christianity is a call to holiness and love, a call to virtue and not wealth and miracles as these pastors project. We are quick to forget the words of God in search of works of wonder. These pastors remind us about the crown of glory but forget the cross of hard work. We like prosperity but forget that Rome was not built in a day.

We sacrifice comfort in search of luxury and primitive wealth accumulation forgetting that the world and its glamorous material things are ephemeral-Duniya Banza like the Hausas say. How do we sow sadness and sorrow in the lives of others and expect to reap joy and happiness? We no longer hear about hard work, patience, simplicity, humility, modesty, sincerity, charity and decency in our churches today. No, these virtues are no longer legal tender in the heavenly market we are made to believe.

Ray Ekpu in his master piece in page 9 of the Newsmatch Magazine of July 14 1986 layed the whole truth bare “in an age of materialism, the church has been caught standing on its head. In a scramble for its own wealth many churches (pastors) have allocated the front seat in the church to men and women who have a heavy purse but less than pure a reputation, an indication that the bee of materialism has stung the church. They seem to be saying “keep your wealth in the church, where neither moth nor rust nor the tax, mean reacheth”.

We must not fail to realize that Christianity is a call to action and not a religion of rituals. It is not a religion of exhibition but a way of life. It is equally a call to share, serve, care and carry others along in moments of challenges and convenience. We must reject these fake pastors and their fanciful claims about a short cut to climbing a palm tree as 2015 prepares to go to bed. Not to do so, is to be like a heap of salt outside the rain.