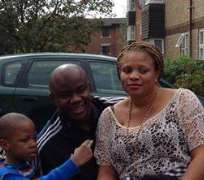 Precisely May 2013 after one month of my blissful marriage with my dear wife Mrs Bridget Odidi(nee Uvoh) when I met High Chief Michael Orobosa Ubogu and his dear wife ,Mrs Uloma Ubogu at a widows programme in Ajegunle.I came as a friend to the host and media promotion of the notable NGO.

On sighting Chief Orobosa Ubogu and his wife, I saw godly corporation in their means in the sense that a man with a vision must flow with a woman of a vision in all ramifications. According to the host of the programme, Evang Benjamin Igoh(JP) who showered encomiums on this enviable couples said they arrived the venue before any other person that shown the credibility of great philanthropists of our time.

What drew my attention to High Chief Michael Ubogu was the sellable speech he made to the widows while presenting some of the items bought by him through the host.Mrs Uloma Loretta Ubogu is such a wonderful woman of substance who wants the younger generation to grow in life. A man once said that if a man has not married, he should not praise himself that God has blessed him.

The case of Ubogu indicates that good things are admired by his lovely wife in all levels. The Olabisi Olabanjo University graduate who also hails from the Eastern part of Nigeria who knows the value of education and has love for the poor. She does not allow her present status to override her than giving back to the society.

In that widows programme she has shown her vertical and horizontal love for the widows without mincing words. How many Nigerian women who are successful in life today can do what Mrs Uloma Ubogu has done to the less privileged ones in the society? She remains

the Hannah of our time.
Recently she marked her birthday bash where her beloved husband sent her birthday message on facebook to show the love he has for his dear wife. Her various postings on facebook indicated how she remains intellectual in sending godly messages to her readers. At that widows programme Mrs Uloma Ubogu was never immodest rather take everybody as the same in life. Unlike some women whose husbands are in their top of careers would like to create scene but remains faithful to her husband in all angles.Today, the Wazobia Widows Foundation of Nigeria keep on praying for Chief and Mrs Michael Ubogu over the love for them. The issue here is that, they are not the richest on earth but the teachings of the word of God have helped both couples to know the principles of success in life. Every successful man on earth must attest to his wife if truly his success comes from God that is why today Chief Michael Ubogu once said his chieftaincy title was given to him from

his wife community. Chieftaincy recommendation from the Eastern part of Nigeria could only come if such person has personality trait which Ubogu has demonstrated over time. She remains the iconic woman Nigeria has ever produced in recent times. She is a well-dedicated and disciplined woman who knows how to run a successful home. When a man has a peaceful home in life, returning from his daily business would become a joy to his life.

Lastly, Mr.Uloma Ubogu,the quintessential businesswoman who knows how to build a formidable family with integrity. She has built love for her children where her husband sees her as the dream wife God sent for him when searching for the missing ribs then. She has publicly demonstrated love for her husband without pretence. She believes that tomorrow is greater than today, so the less privileged ones must smile too. Once again, happy birthday and more glorious years ahead of you in Jesus name Amen.