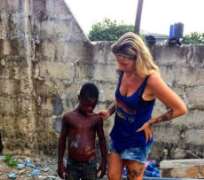 The above caption story was published about a week or two ago being a response to a feature storyline by a Nigerian, Gbenga Oni who is based in Odense, Denmark. The rejoinder was signed by the Anietie Ekong, a Senior PA on Media to the Akwa Ibom State Governor, Chief Chief Godswill Akpabio.

Reading the government response and juxtaposed it with the original story from Mr. Oni which was captioned:

Akwa Ibom Child Witches: A National Embarrassment 1, I became so flabbergasted if not overwhelmed with angst of anger with the Akwa Ibom government response. I did not hesitate, as usual to express my fumes on the government. But soon after I made inquests into circumstance shrouding the child video I equally watched online from the Denmark lady Facebook page, as it was shared by a friend and discovered that though witchcraft dubbed children dot around the my state, nay country, but this particular one was really an exceptional as he wasn't in anyway labelled a wizard but merely an autistic child with some scope of psychological derangement, I shuddered to the marrow how human beings, especially from the European clime could stoop that low to use merely epileptic children and showcase in videos in order to smile their way to the bank.

In the truest sense of honesty, as an indigene who's in touch constantly with my birth home , Eket I did believe this story though with some question as to why the child, Precious, did not utter any comment through out even when he was asked some questions. But when I had the link of the child in that video to friends, which had since been brought down from Ms Loven Ringgren Loven Facebook page, which was discussed different Yahoo and Gmail fora, then sent to Idara, my cousin who succinctly put, ' I personally know this child, he is not branded a witch; he only has mental issue and roams the streets of Eket, but he's not even from Eket as he doesn't speak the dialect or even understand it.

And he's still on the street as at last week and sometimes picking from the garbage to eat. Why should somebody claimed he's wizard stigmatized in order make money out of him. That's exploitation! It's a known fact that one white lady with some boys here picked him, we thought he was going to be taken back to the hospital where he ran out some months back, but was surprised to see him again roaming the streets. He some got up to five seizures a day, and falls on or rolls to fire at times'

I am so appalled that white men or women could also do this kind of exploitation in Nigeria.

The Nigerian Police, DSS, Custom and Immigration, and other related security outfit stand indicted if they failed to investigated this crucible issue of greed and exploitation by the white lady and her cronies.

I reliably gathered she works with some boys from the Stepping Stones of Nigeria, CRARN and a Brazilian NGO called Way to the Nation in this crudest form of exploitation.

The government should leave no stone unturned to carry out an investigation to identify those culpable in this barefaced fraud. It's a daylight robbery of the highest order to use autistic child, advertised in documentary in the international scenes with the soul object of scavenging for money!

I am not really aware of the Way of The Nation organization from Brazil of which I heard few days back and had to research more about it. But CRARN and Stepping Stones Nigeria have been known for their courageous work. What I don't understand is why they opted to work with this Danish NGO called DINNødhjælp and be associated with grim storyline of child exploits.

The lady, Anja, who in her Facebook page claimed she resides in Afaha Offiong, in Nsit Ibom, has never set foot there before as revealed, save for Eket where she domiciles when travelled to Nigeria. Here is another study of falsehood by an European lady. What men cannot do, ladies can do with absolute ease!

In her new documentary she tagged as Heroism of Danish Woman, the Akwa Ibom children are what is used to portray Nigeria in bad light even with the epileptic child therein. I could not have bordered by the diatribe voyage of Gbenga Oni, but having unearthed a lacuna of true heroism in the documentary with inclusion of the mentally deranged child as witchcraft branded which has been viewed by millions across the globe who have also been fleeced of their hard-earned currency, any rational thinking human with or without a bifocal lenses will easily capture this beyond the prism human faux pas, bearing in mind the probable inadvertence that is often associated with goodwill, but until the dramatis personae opt for an unreserved apology to the good people of Akwa Ibom and Nigeria, hoist down such ignoble documentary from the big time international and regional TV advertising an autistic child, they're guilty as charged.

It must be noted that as someone who has been a long standing advocate of truth, honesty and equity, I've not relented in bathing the government of Akwa Ibom or Nigeria for that matter with the hot soda it deserves and equally role out the drums doing the commendation when necessary. This is to dissuade any frail minds that want to view my condemnation of this gluttonous and despicable act of deception as a deliberate venture to play government's man Friday.

In essence, Mr. Oni Whose present abode is Odense, Denmark could also come out clean and sit on ashes for inadvertently misleading the globe with his article 'Akwa Ibom Child Witches: A National Embarrassment 1″

Ubong is a socio-political analyst, based in Netherlands.