Nay to the discrimination against Corporal Omolola 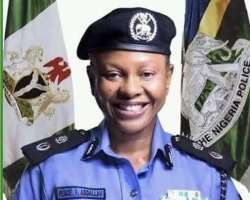 After the United States then known as the thirteen colonies defeated their erstwhile colonial masters – the British headed by King George III, the women turned their attention to their plight in the patriarchal and male dominated American society.

Women could not own property, vote or be voted for, do a business without their husband’s consent and were largely seen as mere chattels with a few receiving any form of education. Activists like Elizabeth Cady Stanton, Susan B. Anthony, Ida B. Wells, Lucy Stone, Alice Paul etc spearheaded the campaign for a better deal for women and today American women enjoy the same rights and privileges as their male counterparts. Divorce laws are in their favour as in some cases they get as much as 50% of their ex husband’s assets in alimony and child support. Women have gone on to be leaders in virtually all fields of endeavour in God’s own country with a black and Asian in the person of Kamala Harris sitting as the current Vice-President in God’s own country. This women liberation ideal has been exported to all parts of the world – developed and developing nations alike and swift changes faster than the speed of light are been made to make life more pleasurable for the fairer sex.

It was with shock and horror that I read the gory news of the sacking of Corporal Olajide Omolola as a serving police officer in Iye Divisional Police Headquarters in Ilejemeje Local Governmentin Ekiti State on the ridiculous grounds of getting pregnant out of wedlock and she can only be reinstated by the Inspector General of Police. According to the Ekiti State Police Commissioner, she violated Section 127 of the police regulation which states that “An unmarried woman police officer who becomes pregnant shall be discharged from the Force and shall not be re-enlisted except with the approval of the Inspector-General.”

The Nations Newspaper’s Editorial of February 3rd2021 goes on to list the litany of discriminatory laws against serving female police officers. It sections 121 and 122 which restrict women police officers to certain duties; 123 which prohibits women from drill under arms; and 124 which requires women police to apply for permission to marry. Clearly, these provisions expose women to discriminatory practices, which in some circumstances can be exploited by their male bosses.

Senator Francis Ezenwa representing Imo State sponsored a bill for the abolition of the discriminatory practices in Sections 122, 123, 124, and 127. We hope that it becomes law soon as the emotionally battered and psychologically traumatized Nigerian female police officers clearly deserve a better deal serving their motherland in the 21st century when their counterparts all over the globe are celebrating female friendly laws on a daily basis.

If on the other hand a serving unmarried male police officer gets a lady pregnant, he doesn’t get sanctioned. Why the blatant discrimination? What is sauce for the goose should be sauce for the gander! For how long will women be at the mercy of anachronistic and archaic male chauvinistic laws?

The United Nations Sustainable Development Goal Five states that woman must have equal rights and opportunity and must be completely free from violence and discrimination as it is a sine qua non for the sturdy building of a more inclusive society. Nigeria is a signatory to the UN’s SDG’s so why is it hard for women to have a better deal in our society?

Despite the harsh reality that stares the average Nigerian woman in the face especially when they have to contend with a plethora of gender discriminatory laws, some are making giant strides by breaking the glass ceiling and being an inspiration to many of their beleaguered counterparts who are tragically part of the daily vulnerable. The likes of Ngozi Okonjo-Iweala who made history as the first female Finance Minister and hopefully the world’s first female Director-General of the World Trade Organization, Dr. Obiageli Ezekwesili made history as the first World Bank’s Vice-President for Africa, Chief (Mrs) Ibukun Awosika is the first female Chairperson of First Bank, Osaretin Demuren is the first female Chairperson of Guaranty Trust Bank, Dr (Mrs) Ajoritsedere Awosika is the first female Chairperson of Access Bank, Chimamanda Ngozi Adichie is currently Nigeria’s biggest literary export, Chidiogo Akunyili-Crosby has sold artworks in the United States at over $1 million. I can go on and on of the exploits that Nigerian women are making both at home and in the Diaspora despite the daunting odds stacked against them. They have dared to dream where angels have feared to tread. In this day and age we should be having critical discussions about having the first female Inspector-General of Police to better tackle the myriad of security challenges in the country where their male counterparts have failed to rise up to the occasion and not this nauseating gender discriminatory law when the world has long moved on.

Section 42 of the 1999 Nigerian Constitution states that ‘Every individual shall be entitled to the enjoyment of the rights and freedoms recognised and guaranteed by the basic law without distinction of any kind such as race, ethnic group, colour, sex, language, religion, political or any other opinion, national and social origin, fortune, birth or other status’. The law which punished Corporal Omolola grossly violates this law and it should be immediately expunged as it is clearly against natural justice, equity and good conscience. The law is a fall out of what our long departed British Colonial Masters gave us and has no place in the 21st century as they have long removed such discriminatory laws from their statute books. Why can’t we do the same for crying out loud?

The country has an unemployment rate of over 21% with the government clueless on how to solve the nagging challenge and Corporal Omolola has now recently joined the ranks of the unemployed. How will she now take care of herself and her baby in a country with no form of social security for the marginalized?

The Inspector-General of Police should do the needful and use his discretionary powers to reinstate her back into the Police Force with immediate effect. The Senate should also ensure that the aforementioned discriminatory laws are abolished in the best interest of women.

Disclaimer: "The views/contents expressed in this article are the sole responsibility of the author(s) and do not necessarily reflect those of The Nigerian Voice. The Nigerian Voice will not be responsible or liable for any inaccurate or incorrect statements contained in this article."
Articles by Anthony Ademiluyi
10-2-2021  Much Ado About Cryptocurrency Ban By The Cbn7-2-2021  From Service Chiefs To Ambassadors31-1-2021  Sunday Igboho To The Rescue?21-1-2021  Out Trump, In Biden By Tony Ademiluyi15-11-2020  Adieu Jerry John RawlingsMore...