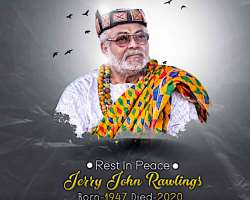 June 4 1979 was a defining moment in Ghana’s chequered political history. It was the day when the word ‘Revolution’ roared throughout the length and breadth of the former British colony which was once called The Gold Coast.

On May 15 1979, a then obscure Flight Lieutenant Jerry John Rawlings led an unsuccessful coup against the government of the then Military Head of State, General Frederick William Kwasi Akufo. The 32 year old mixed race officer was subsequently arrested and was waiting to be court martialled and executed for the failed attempt. On June 4, some junior officers who believed in Rawlings’s cause forcefully broke into the prison and released him from detention and ferried him to the government house – William Shakespeare’s third definition of greatness which is thrust upon some was the apt definition of what happened to the Scottish-Ghanaian Airforce Officer.

He took over power and waged a fierce anti-corruption war. Corruption had eaten deep into the fabric of the Ghanaian society like many post independence African states. ‘Kalabule’ was a local word for corruption and he had a zero tolerance for the scourge.

His exposure to the ills of corruption came from high school when he attended the prestigious Achimota College which was the Eton cloned school for many of the Ghanaian elite. He noticed how some of the sons of politicians and top military officers lived opulently clearly beyond the legitimate means of their parents while the sons of the poor lacked the basic things needed to make life worth living for them. At that impressionable age, he began to ask critical questions on the ever widening gap between the rich and the poor and pragmatic ways in which to solve some of the numerous societal ills.

He became fascinated with aero planes at the tender age of six and expressed his desire to become a pilot which drew the ire of his mother who wanted him to become a medical doctor as a way of climbing up the economic social stratification ladder since medics were well paid in the country. Fast forward to his Achimota days, he decided that the military was an institution which could make a great societal change especially as he witnessed the nation’s first military coup that toppled the Dr. Osaygefo Kwame Nkrumah led government in February 24, 1966. He had been soaked into Marxism by reading many revolutionary books and was determined to donate his widow’s mite to making Ghana a better place for all.

As the Head of the Armed Forces Revolutionary Council (AFRC), he identified corruption as a societal bane and cancer that had eaten deep into the fabric of the society. He felt the people needed to learn by example and some scape goats needed to be used to serve as a deterrent to aspiring corrupt leaders at all levels. Three former Military Heads of State: Generals Afrifa, Ignatius Kutu Achaempong and Frederick William Kwasi Akuffo as well as eight corrupt politicians were summarily executed by the firing squad in a move that shocked the whole world.

The executions were unpopular with many of the western leaders as they cited it as a gross violation of the fundamental human rights of the deceased leaders since they were not tried in a proper court of law. They felt that the principle of Audi Alterem Partem (Right to Fair Hearing) was absent in their trials. Rawlings was then blacklisted as a blood thirsty dictator who was to be shunned. The then Nigerian government of General Olusegun Obasanjo bluntly refused to sell crude oil to them.

Rawlings promised that democracy would return to the country after three months and kept to his word when he handed over power to Dr. Hilla Limann who created an electoral upset by defeating the more popular Victor Owusu who had been the nation’s Attorney-General and Foreign Affairs Minister.

He didn’t make himself the equivalent of a General in the Airforce and returned to his military duty without any form of fanfare. Limann, obviously envious of Rawling’s ever growing popularity dismissed him from the Airforce for no justifiable reason. Corruption soared in his government and many Ghanaians impoverished by his policies and the ones of the military fled the nation most notably to Nigeria for a more meaningful existence.

Rawlings struck again in 1981 and hurriedly sacked the Limann led government. He wasn’t vindictive against him for kicking him out of the military. He named his new regime the ‘Provisional National Defence Council’ (PNDC) and made a fiery commitment to steering Ghana to the path of unprecedented prosperity.

He attracted numerous foreign investors and created the enabling environment for businesses to thrive and prosper. His economic policies were so favourable that he was nicknamed ‘Junior Jesus’ a clear pointer to his messianic mission to rescue the country’s ailing economy from the doldrums. He made a clarion call for his countrymen scattered all over the world to return home and help rebuild the nation from within. Many of them caught his infectious patriotic bug and returned back home lock, stock and barrel to contribute their quota to nation building.

Despite his charisma and common touch, he wasn’t without his faults as a mortal. In a bid to obtain loans from the Bretton Woods Institutions, he greatly devalued the Ghanaian currency – the Cedi. The devaluation so hurt the vast business interests of the local elite that they renamed him ‘Junior Judas.’

He was unfazed by the criticisms of the elite and famously made a remark that he may not understand the nuances and intricacies of economics but he certainly knows when he is hungry. His putting of a used cigarette in his ears resonated well with the Man on the Clapham Omnibus as it showed a deep solidarity with their united foe of hunger and want.

The heady days of the 1990’s was filled with the wave of democratization in Africa. Rawlings, a street smart man heeded the popular call by transforming himself from a civilian dictator to a democrat by contesting and winning the 1992 presidential elections under the banner of the National Democratic Congress (NDC), the party that he formed alongside some politicians.

He won a second term in 1996 and handed over power to John Agyekum Kuffour in 2000 despite the fact that they were from different political parties.

He assumed the role of a statesman and an oracle of sorts who bore his mind on burning issues as they affected Ghana and the African continent.

Ever so young at heart, he was very active on social media especially on twitter where he effortlessly connected to the millennials and generation z in disseminating his views. He maintained a vibrant media office and was always on hand to mentor young upcoming politicians.

He was also open to criticisms and didn’t take his wife’s loss in the presidential polls personally.

When the history of Ghana and Africa is written, he will certainly feature prominently as a nationalist and patriot of the highest order. He will be remembered as a selfless citizen who put his country first and resisted the nauseating lure of becoming a sit tight leader as he voluntarily handed over power twice in a continent riddled with aged dictators.