Out Trump, In Biden By Tony Ademiluyi 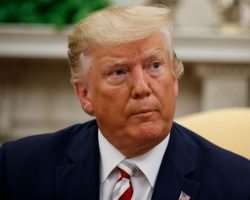 In 1988 Donald Trump made speculations that he will be throwing his hat in the ring in the US presidential race. Nobody gave the ‘Real Estate’ mogul a chance as the then Vice-President George Bush Sr was the front liner by the opinion polls to succeed the legendary Ronald Reagan.

Trump known for his publicity stunts carefully weighed public opinion and decided not to press his ambition further. Not tired, he tried the same stunt in 1992 shortly after his famous bankruptcy filing and decided not to go ahead as there was no way he could have gotten the Republican party ticket as Bush had a very high approval rating no thanks to the Gulf War.

When he announced in 2016 that he will be running for the highest political office in Uncle Sam under the Republican Party, few gave him half of a chance. Historians saw it as one more stunt as the blonde clearly loved being in front of the camera. Political pundits laughed at him to scorn as well as his fellow contenders in the Grand Old Party (GOP). He did the unthinkable by clinching the ticket and the then US President Barack Obama warned the nation that he was unfit to govern the country.

No sooner had he won the primaries that he began to show his true colours of a racist and vile populist. He whipped up anti immigrant sentiments by opining that the immigrants were stealing jobs forgetting that America’s beauty is that it is a land built on the labour of immigrants and he himself is the grandson of a German immigrant. He promised to build a wall reminiscent of the Iron Curtain in the days of yore of the Cold War to permanently keep the Mexicans out of American soil. Like the Scion of the infamous Ku Klux Klan, he appealed to the Caucasians especially those whose economic fortune had nosedived, the Christian Evangelicals who were aghast at the progress being made by the Far Left especially with the legalization of same sex marriage under the Obama Presidency and the massive funding for abortion and its exportation overseas, his fellow racists who couldn’t live with the fact that a first generation immigrant of a Kenyan who went back to his country after his studies at Harvard now sat in the White House as real proof of the American dream. In the end he defeated Hillary Clinton by 304 to 227 even though the former First Lady surpassed him by nearly 2.9 million popular votes.

The Bull in the China Shop in fairness to him has to his credit massive job creation for Americans owing to his controversial success as a businessman. For the first time since Franklin Delano Roosevelt who launched the New Deal in 1933 which saw the American economy recover exponentially from the Great Depression, the economy in the early years of Trump roared like a Lion and it was inclusive of the blacks and other ethnic minorities.

His asinine racist tendencies greatly eroded the gains he made. He placed a ban on some Muslim nationals coming into the country dismissing them as terrorists. He abolished Obamacare that brought relief to millions of poor Americans who were hitherto denied affordable healthcare as it is the most expensive in the world. Trump didn’t mind leaving the vulnerable including the homeless at the mercy of the ruthless sharks called the Pharmaceutical companies who operate like the modern day reincarnation of the Shakespearean Shylock. His immigration policies separated children from their immigrant parents especially from Mexico and illegal immigrants lived in the perpetual fear of a heartless deportation even in some cases when they were children of illegal immigrants.

His ‘America First’ saw the shrinking of Uncle Sam in global politics as he pulled her out of the Paris Climate Agreement and the Iran Nuclear Deal. He snubbed Africa as his relationship with the continent was paternalistic and patronizing and he couldn’t be bothered to visit any country there.

Some officials from the World Health Organization warned him as far back as January 2020 of the corona virus but he dismissed it with the wave of the hand. His lackadaisical attitude towards providing effective leadership cost his countrymen over 400,000 lives and made mincemeat of his economic progress as over one million of his countrymen filed for unemployment benefits.

When he was up for re-election against Joe Biden late last year, he called the latter all sorts of derogatory names most notably ‘Sleepy Joe.’ Biden went on to defeat with a landslide of 306 to 232 Electoral College votes and by securing 81 million popular votes – the highest ever in the annals of American electoral history.

Trump, being a sore loser would hear none of it. He couldn’t act like a gentleman by congratulating Biden. Instead he called the election a fraud and rallied his riotous supporters on Twitter to an insurrection on the Capitol Hill on January 6 when the Senate met to confirm Biden’s electoral victory.

At the end of the day, the social media giants – Facebook, Twitter, Snapchat, Youtube permanently banned him from their platforms and his right wing supporters found refuge in Parler created by John Matze and backed by conservative journalist Dan Bongino which was later yanked off from Amazon web hosting services. Like a child whose candy was taken away from him, he refused to attend Joe Biden’s Inauguration yesterday.

Joe Biden has the onerous task of uniting the bitterly divided country which has been badly polarized by his predecessor’s childish and rancorous antics. He has to make sure that all Americans are given the equal opportunity to dream without any iota of racial barriers.

The theme of his inaugural speech was hope as he said ‘We will write an American story of hope.’ America badly needs a gargantuan dose of hope as the pandemic has rendered many economically destitute.

We commend his $1.9 trillion stimulus package which will see the poorest of the poor receiving $2000 a month. This will in no small measure restore their dignity and put a smile on their beleaguered faces.

Biden has the common touch which makes his story relatable and resonates with the common American. He struggled through school and didn’t attend any of the Ivy Leagues that traditionally produce the Presidents. 2020 was his third attempt at the Presidency having lost in 1988 and 2000. He had a personal tragedy in 1972 when he was just elected into the Senate. He lost his young wife and daughter in a car accident and was sworn in from the hospital as he attended to his injured son. He also lost his son, a former Attorney-General of Delaware to brain cancer while he was Vice-President. In a video widely circulated by Arise News, he put a call across to a Nigerian man and his daughter thanking him for his $12 contribution to his campaign and bonding with them on the phone. This shows the humane side of him not common with African especially Nigerian politicians.

On his first day at work he has overturned some of Trump’s policies by signing some executive orders which included the rejoining of the Paris Climate Accord, Ending the travel ban from several Muslim majority countries and bringing back America into the World Health Organization (WHO).

We are confident that his Presidency will spell a better deal for Africa as opposed to Trump’s isolationist one.

Biden scores a first in being the oldest American President at 78 and the second Roman-Catholic after John Fitzgerald Kennedy to sit in the White House.

We wish him the best of luck!
Over to you Biden!
Tony Ademiluyi wrote from Lagos.

Disclaimer: "The views/contents expressed in this article are the sole responsibility of the author(s) and do not necessarily reflect those of The Nigerian Voice. The Nigerian Voice will not be responsible or liable for any inaccurate or incorrect statements contained in this article."
Articles by Anthony Ademiluyi
10-2-2021  Much Ado About Cryptocurrency Ban By The Cbn7-2-2021  From Service Chiefs To Ambassadors3-2-2021  Nay To The Discrimination Against Corporal Omolola31-1-2021  Sunday Igboho To The Rescue?15-11-2020  Adieu Jerry John RawlingsMore...