The Trial of Sowore 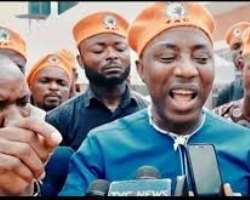 Renowned human rights activist and anti-corruption crusader, Comrade Omoyele Sowore alongside his sidekick, Olawale Bakare were supposed to have their day in court today – February 12, 2020.

There was palpable disappointment as the presiding Judge, Justice Ijeoma Ojukwu adjourned the trial till tomorrow and awarded costs to the duo to the tune of 200,000 naira each to be paid to their accounts by the Federal Government.

One wonders why the prosecution is using delay tactics to stall this important trial that has elicited global attention.

We recall that the DSS kept him in their custody for over four months after the courts had granted him bail. He was even rearrested after being earlier released. It was on Christmas Eve that he was finally released on bail after a global outcry.

The Attorney-General of the country has taken over this case from the DSS but the highly esteemed office is still rather sloppy with the handling of it. This case which involved treason is a highly sensitive one and time should be of the essence as that is one of the criteria for justice to be done.

Justice delayed is justice denied and one may be tempted to think that the prosecution doesn’t really have much of a case against the duo and just simply want to flex their muscles by restricting their movement in violation of their fundamental human rights.

It is the duty of the prosecution to establish the allegation against the defendants and not to let the latter engage in an endless Wait for Godot.

Many pundits opine that Sowore is a victim of government persecution since he dared to run against President Muhammadu Buhari in the last presidential elections. Some of his critics allege that he was instrumental to the removal of former President Goodluck Jonathan through his well read and followed online platform. He was said to have been promised a ministerial appointment after last year’s elections but it was apparent that he was used and dumped hence his strident call for a revolution.

The above assertions belong to the rumour mills which have no place in intelligent and unbiased discourse. The government has no right to keep him away from his family and supporters through the use of delay technicalities.

Sowore has always been a man of peace since he burst into national consciousness in 1993 where he played an active part in the struggle for the revalidation of the June 12 presidential mandate which was presumably won by the Late Chief M.K.O. Abiola. He has always been on the streets canvassing for good governance and has never been known to be involved in acts of violence capable of disturbing the public peace.

His revolution now protest which would have held on August 5th last year would have been in no way different from the other peaceful rallies that he has spearheaded over the decades. As an Igbo adage goes ‘You cannot learn how to be left handed in old age.’ Sowore has gone so far and acquired a gargantuan national and international clout to spoil his name through any act of violence. His clout came to play when his amiable wife, Opeyemi got the Senator and Congressman representing his constituency in New Jersey to pile pressure on the Buhari led government to release him on bail. He was even nominated for a prestigious human rights prize in the United States. How can he throw this away and get involved in activities that can cost lives and properties?

‘He who comes to equity must come with clean hands’ goes a cliché. There is no point in the prosecution keeping Sowore waiting when they seem to be at a loss on what to do with him.

Every disappointment is a blessing as his August arrest and needless detention exponentially increased his popularity and clout both nationally and globally. The DSS played into his hands and the wily activist simply used their weakness to his advantage.

Prior to his arrest, he was mostly known to the educated elite who used the internet and new media as well as social media. Right now, his name is on the lips of even the illiterate on the streets. The DSS only succeeded in making him a celebrity when they could have ignored him and simply watch him run out of steam in August last year.

We recall how endless delays made the former Chief Security Officer to the Late General Sani Abacha made his case drag for well over a decade before his release. We hope that this wouldn’t be the case with Sowore as Colonel Sambo Dasuki suffered the same fate despite the pledge by Buhari that he is now a reformed democrat.

The prosecution should waste no further time in making Sowore and Bakare stand trial. The Judge should also enforce the costs against them and slam the former with more costs should they persist in their act of cowardice.