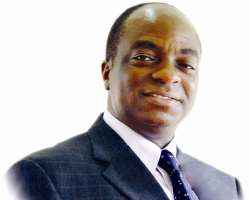 During this week, the news was agog with the ‘news’ of the visa denial of the Founder and General Overseer of the Living Faith Church or Winners Chapel, Bishop David Oyedepo by the United States Consulate in Lagos. The ‘news’ had it that the prosperity Bishop was so livid with anger at his denial that he created a scene at the embassy and wanted to speak to a high authority before being reminded that he wasn’t allowed to make phone calls at the embassy’s premises. The news spread like wild fire accentuated by the harmattan as it came shortly after Nigeria was slammed with a travel ban by the world’s most powerful and prosperous nation. Could Oyedepo be among the first victims? Did the embassy run ‘mad’ in denying a man who had numerous investments abroad and had no need of absconding their much cherished visa? We recall that this came at the heels of the ban on birth tourism slammed on the country as well as on China and Russia.

Trust the Nigerian media, the news was everywhere at the same time and the ‘emergency analysts and pundits’ opined that there were no sacred cows at the embassy.

This news didn’t stand the test of time as the American embassy vehemently denied the denial of the prominent Man of God the visa to her country. It was quoted to have said: “Be advised, the reports making the rounds about a visa being denied to Nigerian Bishop Oyedepo are false. If you have seen this manufactured item in the media, help defeat this misinformation by communicating to everyone that it is completely false.”

There was a follow up rebuttal from the Winners Chapel when the Chairman of the Editorial Board and Media Board Unit of the church, Professor Sheriff Folarin debunked the viral claim when he said: “Bishop was not at the embassy or consulate Thursday or even anytime this year. Bishop has been in Canaanland all this week. The last time he applied for visa, which was last year, he was issued without delay”.

“We wish to put it on record and categorically submit that this piece of information is not true. At no time was the Bishop denied visa, nor did he create a scene at the US consulate in Lagos

“We have been in touch with the US Embassy and they are as surprised as we are about this fake news which some media houses decided to spread.”

It also went further to say that the preacher was a good friend of the Consulate as well as the US government and so there was no reason to deny him of the visa.

This is clearly one of the numerous fake news that is haunting the nation with the proliferation of the new media which is both a blessing and a curse. How on earth was this news manufactured? Who was the first person to conceive it? How did he or she spread it and what made it go viral? These are questions that are urgently begging for answers. This is one of the reasons why the Federal Government is mulling the idea of the regulation of the social media in order to contain the monster called fake news. The social media has made matters worse with its infinite power to spread the news as far as possible within the shortest space of time.

We recall the fake news in the pre social media era of Professor Wole Soyinka graduating with a third class at the University of Ibadan when he didn’t finish his programme and transferred to the University of Leeds in England. We also remember the ‘third class degree’ that was awarded to the current Minister of State for Labour and Productivity, Barrister Festus Keyamo who left the Ambrose Alli University with a Second Class Upper. How on earth do this sort of news get conceived and spread so swiftly?

Fake news does more harm than good and a subtle form of regulation devoid of a media clamp down should be applied to the new and social media. The downside of the advent of the World Wide Web is that anyone with a decrepit smart phone and infinitesimal data now claims to be a journalist. There needs to be an end to this insanity as the victims and the members of the public are worse off for it.

I recommend that an agency be set up to checkmate this evil of fake news and the members of the public should act as an Ombudsman to ensure that they don’t overdo things or become power drunk and vindictive to perceived ‘enemies.’

For the amiable Bishop, please take heart and don’t take it too personal. Many Nigerian bloggers are hungry upstarts and so need this kind of asinine news to trend and drive in the much needed traffic which will ultimately translate into revenue for them.

To my readers, I wish you a Happy New Month and please stay clear of fake news and develop a hard nose to be able to sniff it out.