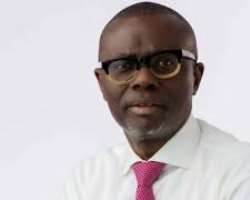 The Lagos State Governor, Babajide Sanwo-Olu was in the news recently over his plan to grant amnesty to criminals operating in the state as a strategy to combat crime in the economic nerve centre of the nation.

This plan is in bad taste as it purports to pass on a surreptitious message that crime indeed pays in the ‘Centre of Excellence’. Lagos State with its robustly funded security trust fund should be a no go area for criminals who should be constantly watching their backs when they are on the streets. This asinine move by the governor has effectively made the state surrender to these urchins.

Amnesty for bandits in Nigeria has its origin in the move by the Federal Government under the Muhammadu Buhari led Presidency to give such to the insurgents. The irony was that the latter declined the offer opining that it was they who should give the FG amnesty. What an irony!

Sanwo-Olu should be more concerned with crime prevention through the massive building of skill acquisition centres which will see a free and compulsory enrollment of young people across the state irrespective of tribe as the state is the country’s cultural melting pot. After their training, they should be either given take off grants or soft loans at humane and flexible interest repayment rates. The idea is to keep them sufficiently busy so that their minds won’t wander to partaking in acts of criminality as idleness breeds such a mindset.

There should also be the more effective tackling of crime as the state has the resources to tackle the scourge. It was the first state in the country to conceptualize the concept of a public-private partnership in crime control through the establishment of the security trust fund sometime in 2007. It shouldn’t have any excuse for Lagosians not to be able to sleep like babies with their two eyes closed.

The wants of man is insatiable. Even if the scheme is implemented, it wouldn’t stand the test of time as the beneficiaries would go back to the streets since they reckon that they will make much more money from acts of violence there.

These violent non state actors will perpetually hold the state by the jugular to extort more money from them as they may not either hand over all their weapons or they will easily procure more to cause further damage with some of the money that will be paid to them from the scheme.

Lagos cannot hope to become one of the world’s mega cities if it tacitly encourages criminal actions through this ill-fated scheme. Reduction in crime is a sine qua non for the conferment of such a status on a particular state. The state should adopt a zero tolerance for crime instead.

There is also the menace of the ‘area boy’ or ‘agbero’ syndrome that is the most brazen of daylight criminality under the cloak of the National Union of Road Transport Workers in the state. The establishment hs obviously long endorsed it as these boys are used as political thugs during elections and run errands for politicians from time to time. These idle hands have become role models for the youths since they make easy money without any form of brain work. It’s just brawn as they endlessly chase after vehicles like bees do to honey. The government should gradually take these boys off the streets through this skill acquisition centres which will give both hard and soft skills to them so that they can live a more productive life.

I was shocked when MC Oluomo, a well known ‘agbero’ was invited to be among the guest speakers at a conference in the University of Lagos. How low have we sunk as a nation due to materialism and disdain for the sweat of one’s brow!

Tax payers’ money shouldn’t be used to fund the whims and caprices of criminals who in most cases have a recidivist tendency. A similar scheme was experimented with in Ondo, Taraba, Zamfara, Katsina, Kaduna, Imo, Rivers, Benue which ended in a colossal failure. Sanwo-olu should learn from the examples of these states so as not to repeat the same error in Lagos.

Lagos should be made attractive to foreign investors and tourists and this strange form of amnesty will be a red flag as no sane mind will situate his or her hard earned investment in a clime that honours criminals rather than reprimanding them. There is no point in building various hubs like the Eko Atlantic City and the Lekki Free Trade Zone if the security of lives and property isn’t of paramount interest to the government.

Despite the billions of naira pumped into the Lagos State Security Trust Fund, it cannot boast of a downloadable app or even a number that can be used to call the police who will promptly respond in going to a crime scene. What a tragedy!

Sanwo-Olu should hearken to the voice of reason in not going ahead with his planned amnesty scheme as billions of naira will be wasted in the process. He should look inwards and think of sustainable ways of tackling the behemoth of crime in the state.

It is high time we enjoyed good governance in the most populous albeit smallest state in the country.