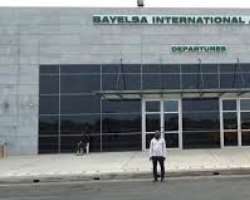 Professor Chinua Achebe ended his twenty-one year fiction writing hiatus by writing the ‘Anthills of the Savannah’ which is one of the greatest literary oeuvres to emerge from Africa. It was a 1987 Booker prize shortlist. The antagonist, Ikem Osodi was the editor of the government owned National Gazette and was had a nasty encounter with a reckless cab driver. The driver upon being acquainted with his high social status went in company of a friend to apologize to him. The driver then said he didn’t believe a journalist of his status would be driving a battered car and to make matters worse, he was driving it himself when the norm was to have a chauffeur. After their departure, Osodi thought to himself that the leaders in the fictional African State of Kangan didn’t have a connection with the led which was supposed to be the raison d’etre for good governance.

The same is playing out in Nigeria when some state governors are obsessed with the idea of their states owning their own airport. States like Osun, Ekiti, Gombe, Ogun, Zamfara, Nassarawa, Anambra, Abia and Bayelsa have gone bonkers in their bid to build their own airports without the thought that such a project is worse than a white elephant project.

Under the Rauf Aregbesola leadership, Osun state signed a build, operate and transfer arrangement in 2012 with a private investor initially put at 4.5 billion naira but it later ballooned to about 69 billion naira. The current leadership of Gboyega Oyetola is now on the frantic search for new investors as the government’s finances is too lean to finance such a grandiose project.

This is tragic as Osun state has the potential to become a food exporter to other African nations because of its arable land. Also in Ilesha, they possess large deposits of gold which could be turned into a mining hub similar to the one you have in South Africa. There are so many tourist attractions in the state. Ile-Ife alone hosts not less than close to seventy festivals annually. How many people visit Osun state on a daily basis? The lack of vision by its leaders has turned the state into a civil service state where many civil servants go through hell and high water to get their regular monthly salaries. Some even had to endure being placed on half pay because of the visionless leadership that has plagued the state since 2010. How many Osun indigenes would be able to afford an air ticket on a consistent basis? There is already an airport in the neighbouring Oyo State which boasts of far more air traffic so what is the point of building another? It’s a mere case of ‘My Mercedes is bigger than yours’ apologies to the renowned author, Nkem Nwankwo.

The Benue State Governor, Samuel Ortom recently announced to the public that he planned to build an airport to the tune of a whooping eleven billion naira. He also said that the funding will come from the state’s internally generated revenue. According to a report gleaned from the National Bureau of Statistics, its internally generated revenue from the period of January to June 2019 was a mere 12.13 billion naira and its wage bill was 7.9 billion. One wonders whether he intends to starve the civil servants as that is the only viable way the funds will be committed to the two year plan of constructing it. How many people travel to Benue state? The state is one of the ones under siege from the Fulani herdsmen so no sensible person will consider going there as a first choice. The state’s sobriquet is the ‘Food basket’ of the nation. How has it lived up to its name under the Ortom led leadership? Why can’t he pump in that money into the state’s security so that the farmers will farm more often without the fear of molestation by the marauding and savage herdsmen? It can even produce enough for exportation to other states and even outside the shores of Nigeria. How many people travel to Benue via air? What will be the volume of traffic for it to make profits or even break even? The one of Ekiti is even more tragic when you consider that its Governor bagged his doctorate in civil-military studies at the tender age of twenty-eight from the prestigious Kings College Lagos. What is the viability of the airport in a largely civil service state? Who will fly the planes? Is it the civil servants who are paid a mere piddling as salaries or the pensioners who celebrate every monthly pay day with gusto?

The same can be said of Abia, Anambra, Nassarawa, Ogun, Zamfara, Bayelsa and Gombe.

Ogun has close proximity to Lagos which already has the Murtala Mohammed International Airport; what’s the point of having another? Bayelsa is a state that owed civil servants for months despite its vast oil wealth via the thirteen percent derivation from the Federal Government. The state is one of the worst governed in the country. What do potential tourists hope to gain from a visit to the poverty stricken state? How many Bayelsans living outside the state can afford to fly? The case of Zamfara is rather ridiculous. This is a state that rejected the ten million naira monthly upkeep for its former Governor Abdul Aziz Yari. Where will it now get the required billions to build the airport and manage it? How many passengers will willingly fly that route?

Nigeria desperately needs leaders who can come up with novel ideas to come up with creative solutions to solving nagging challenges. No investor worth his salt would pour in his or her hard earned money to a project that can best be described as a mere ego trip. The Governors should jettison this beautiful nonsense and get their hands dirty to work for the common good of the people that they were elected to govern.

In sane democracies, the citizens would have taken to the streets to protest this clear anti-people policy but alas we are in a third world jungle where conspiratorial silence reigns supreme.