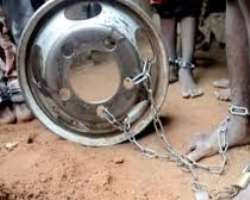 Two days ago, Human Rights Watch, a foremost human rights organization in Nigeria released an extremely shocking expose on the plight of mental health or psychiatric patients in Nigeria.

In a one year extensive report which spanned numerous interviews with many patients in the Federal psychiatric hospitals across the country, traditional healing centres, Islamic and Christian faith centres, it was revealed that many of the psychiatric or mental health patients were chained for a long period of time – in some cases months, were forced to eat, drink and even defeacate in the same spot, routinely beaten up when they refused to take their medications and in some instances were subjected to electrical convulsive therapy without their consent.

“People with mental health conditions should be supported and provided with effective services in their communities, not chained and abused,” said Emina Ćerimović , senior disability rights researcher at Human Rights Watch.President Muhammadu Buhari said in October 2019 of the Islamicrehabilitation centers that he would not “tolerate the existence of the torture chambers and physical abuses of inmates in the name of rehabilitation.”

Tragically, these vulnerable members of the society who should be treated with lots of love and care are subjected to the most degrading forms of human abuse fit only for beasts of burden.

There is a large misconception as to the nature of the illness in Nigeria as it is mostly attributed to demonic attacks, spiritual crisis and ancestral curses. It is seen as a strange illness that requires brute force to effectively handle. There is a lot of stigma that the sufferers pass through as they are blatantly discriminated against by even their loved ones due to their being perceived as less than humans.

Currently, there are less than three hundred psychiatrists attending to the millions of patients in the country as majority of them have fled the country to avoid economic repression.

A visit to the federal neuro-psychiatric hospitals reveals the agony that these patients go through to get their treatment. In most cases they are told they have to take these medications for life without any hope of discontinuing it. These drugs have very powerful side effects and hamper the effective day to day living of the patients. In many cases the student’s academic activities are greatly disrupted because it could work against memory retention. For some workers, it could lead to lower productivity at the work place as they could feel drowsy and in some cases could get fired summarily if word leaks to their employers that they are on psychiatric medications.

The crowd in the hospitals is enough to break the heart of a lion. Patients could spend more than five hours just to see the doctor and purchase their medications. There is hardly enough time for useful discussions between the patients and doctors as the latter are always in a hurry to dismiss the patients so as to attend to the mammoth crowd.

Then comes the prohibitive cost of the medications which leaves many patients begging for public assistance and constituting a societal nuisance in order to fund it. The clinic days in the government hospitals fall on week days which are working days. It is usually difficult for workers especially those in the private sector to regularly go for their clinical appointments without disclosing where they go to as they could be fired as a result of the deeply entrenched discrimination that sufferers go through in the country. Even though who work for organizations that have an HMO prefer not to disclose the nature of their ailments for fear of losing their means of livelihood.

It is very expensive seeking treatment with the private practitioners as some charge as much as fifty thousand naira for less than an hour session. The patients in Nigeria are in a real catch-22 situation as the government has abandoned them to their fate.

Many of the patients especially those in the religious centres are denied food and water in some cases for up to three days because of some ridiculous ‘fasting’ for their complete healing. Many of the healers robustly defend the chaining methods as they opine that it is the most potent way to prevent any form of escape from the detention facility.

There is need for the government and all health stakeholders to sensitize the public about the illness and remove the myths surrounding it so as to reduce to the barest minimum the stigma associated with it. It is an illness like any other which can affect anyone irrespective of age, gender, social status or sexual orientation. There is also the need for the psychiatrists to do more intensive research as many doctors in the west are moving away from the daily dozing off patients to helping them live independently of the drugs through effective drug holidays. Many psychiatrists in the west most notably Dr. Peter Roger Breggin are beginning to criticize the long usage of drugs and are advocating the drug replacement with psychotherapy, love and care. There is the need for Nigerian psychiatrists to tune in to the fast moving modern times.

HIV drugs are free in Nigeria; there is no reason why psychiatric drugs shouldn’t be free in government hospitals so as to alleviate the financial burden on the sufferers especially the indigent ones.

The government should put in place strong structures to make these patients live reasonably useful lives as the illness isn’t a death sentence. What is needed is more love and care for its effective management. There should also be laws criminalizing the dehumanizing treatment that the sufferers suffer.