Did this really happen in Chrisland School 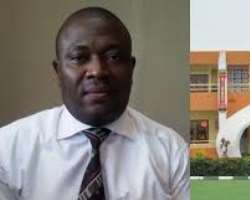 The locust years of bad political leadership in Nigeria took a heavy toll on the country’s educational sector. Public schools both at all levels which used to be the jewel of learning have been battered to no end no thanks to the visionless and rudderless leadership especially during the despotic days of military rule.

Most of our leaders attended these schools which gave them immense opportunities to take advantage of the good things that life offered them back in the good old days. Rather than develop these schools to help safeguard the next generation, they proceeded to throw away the ladder that aided their ascent to success.

Private schools emerged as a child of necessity to give quality education to the ‘leaders of tomorrow’ excuse my pun as the tomorrow never seems to come to reality. Across the country, there sprung up an avalanche of these schools to fill up the vacuum left by the decrepit public schools.

One such school to berth in Lagos – the nation’s economic nerve centre and former political capital was Chrisland School. It was established by Chief (Mrs) Winifred Adefolahan Awosika in 1977 with the first branch being opened in Ikeja. It has gone on to expand to branches in Opebi, Idimu, Lekki, Victoria Garden City and Abuja. It has expanded into both a high school and recently a university.

The school is targeted at the elites with highly prized school fees that leave even some of the deep pocketed gasping for breath at the commencement of every school term.

It was to my shock and utter dismay when the news broke out that one fourty-seven year old Adegboyega Adenekan, a supervisor in the VGC branch molested a two year old girl and two others in the school sometime around November 2016.

Child molesters are prowling around like roaring lions looking for kids to devour. Most of them are supposed to be the custodians of these vulnerable and impressionable children. It is sad that a supervisor could be so debased morally as to cause a life-long psychological damage to the mind of an innocent child. What does a two year old child really know? It is a wonder how she even got to report the ugly incident to her parents who promptly took action.

The critical question to ask is how come the school authorities were ignorant of the unholy liaison between the hapless girl and the beast of a supervisor until it escalated to the media? What disciplinary measures were taken to adequately punish the nauseating act which speaks of crude and raw barbarity?

During the course of the court proceedings, it was revealed that he was redeployed to the Ikeja branch. Was that sufficient punishment for such an offence? Did the school authorities carry out a proper investigation? Why did the mother have to complain and bring the matter before a media trial? Was there the existence of a cabal who was shielding his activities? Why didn’t the school authorities fire him and hand him over to the Lagos State government for criminal prosecution? If it is established that the school tried to cover up the scandal to avoid bad publicity, it is necessary for the government to step in as a deux machina and give the appropriate sanctions in public interest.

What happened to Quality Assurance in the educational sector? In a sane and decent society, Chrisland School may have been shut down pending the conclusion of investigations with a hefty fine and possible permanent license revocation to serve as a deterrent to other school proprietors that profits should be made with a human face and conscience. The school owes a duty of care according to the law to protect the rights of the children in its custody and any dereliction from it should be sanctionable.

I am surprised that no girls or child’s rights activist has taken up the gauntlet to fight for this helpless girl. No twitter hashtags, barricaded protests, media interviews etc has been seen on her behalf. There seems to be some double standards when it comes to causes that these so called activists chose to fight for. It seems they don’t want to step on the toes of the rich and powerful lending credence to the ‘cashtivist’ theory that most of them seem to be.

We call on the Lagos state ministry of education to thoroughly investigate this matter as there may be more cases lurking around. Also, the Quality Assurance Unit should be strengthened so much so as to be able to hold the schools to account no matter how influential or powerful their proprietors or proprietresses may be.

If Nigeria, the so called ‘Giant of Africa’ is to breed leaders that will be change agents, we need to sturdily protect the rights of the young ones from rampaging monsters so that these kids don’t vent their emotional torture on the society later in life.

It is a good step that he has been confined behind bars by the Judge who revoked his bail.

We must adequately protect the next generation of Nigeria’s leaders particularly the girl child who are more susceptible to child molesters.