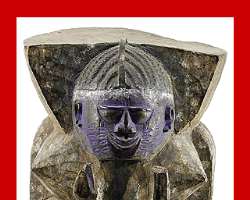 Shango, Yoruba God of Thunder and Lightning
Listen to article

Once more, it is France that has awakened the world conscience, not Baga Massacre in the Northern part of Nigeria where Boko Haram had a free reign of terror. We must all realize that massacre anywhere encourages massacre everywhere. It is no more a country or regional issue; it is a worldwide terror that requires all hands on deck. Bathily a Muslim from Mali; saved lives.

While Russia and China revolted, Yoruba's tolerance for any religion within the same family can be understood if we dig into their philosophy that explains the culture. Yoruba say: Olorun maje k'a gba were mo esin. No matter how accommodating, Yoruba pray to God to forbid radical madness demonstrated by all foreign religions. Ancient visitors to West African sought Sango after stories of civilization by Arab historians about Oba Koso, Ile-Ife and Iwo Eleru 10,000 BC.

Professor Wole Soyinka noted the irony in the words of German scholar Leo Frobenious, glaring at the Yoruba chiefs in Ile Ife, wondering if they were the lost descendants of the Atlantis civilization. Sir Flinder Petrie, world renowned archaeologist noted the similarity between terracotta head of Ife and that in Memphis. Osun staff is a serpentine staff crowned in bird caving, carried by initiates of Obatala. It is the same medical symbol of Caduceus. See Here

The Christians went through radical changes from Catholic Church to Anglican and many others including the latest Apostolic and Pentecostal Churches of Nigeria. Preaching Crusade mellowed over the centuries. On the other hand Muslim sects have become more radicalized by some fanatic invaders forceful to the point of violence, never witnessed in our modern era of religion. It gave shelter to political fanatics versus aggrieved down trodden folks in search of vengeance.

In Asia, especially between India, Pakistan and Bengal Dash, the caste system which became another form of discrimination encouraged lower caste to convert into Muslims and reject privileges of the upper caste over them. This has become a trend in Europe and America where minorities that have been denied assimilation into the mainstream of the society tend to join Muslim sects in higher proportion than those privileged.

Equally dangerous are the extremists within the privileged majorities that are highly religious conservative Christians, Hindu, Buddhists or Muslims. Squeezed in between these conservative extremists and the oppressed, are moderates or liberals trying to find and make peace. In most countries, their vehicle of expression is through political parties. As one tries to squeeze more out of the other; we hear labels such as corporate and welfare bums feeding on governments.

Arab Spring is another example. It became struggles between religion, military rule, democracy and conservatives with disastrous consequences in Iran, Iraq, Libya and Syria. So, Saudi Arabia and Egypt retained authoritarian rules. Unfortunately, the extreme behavior of each side never stays within a country. It is exported as religious baptism, democracy and socialism that may not conform to indigenous culture, as that of the Yoruba. It is better sold as universal freedom.

The spillover was obviously to the closest poor countries to them in Africa. These countries are in the weakest positions to repel virulent insurgents of the worst form of religious extremists. They are already suffering from internal conflict of civil wars over gold, diamond and oil sales to buyers outside the Continent where it is turned into final products and sold back to them. Many are still battling AIDs, Ebola, Malaria etc. apart from Boko Haram in Northern Nigeria.

For each person killed or maimed in Europe and America, hundreds are massacred in Africa. The alarming massacre in Canada, Australia, U.S.A, Britain and now France demonstrated how urgent it is to marshal united front against terrorism anywhere. Indeed, international fighting force must be formed through the United Nation as deterrent fighting force against all religious extremists. Most victims are their own. One French Police Ahmed Merabet killed, was a Muslim.

The voice of Egyptian President calling for revolt is welcomed, but it must be against all deadly religions either in the name of Jihad or Crusade. Compare Russia or China that revolted in order to build national conscience, to Yoruba that tolerated all religions in a family. Not even revolt or tolerance of deadly religions has completely eliminated fanatics looking for relevance via piety.

If religions are to express the best of human behavior of tolerance in us and accommodate one another regardless of ethnicity amongst one race of people, the Yoruba of West Africa exhibit one of the best examples. We all have fanatics amongst us no matter what religion you belong to. Too many have sneaked into the highly esteemed class of God preachers to dictate our way of life, invade political process and subjugate us to their whims and caprices.

Provocation, bullying like children in class with jokes and pranks against loved and respected prophets or desecration of holy books must be measured to conform to norms and decency rules we expect from our university newspapers. If we want school newspapers to exercise good judgment, children not to bully and play practical jokes on one another, it is not too much to expect the same from grown and responsible adults as in fear of defamation.

However, there is more to the massacres of people because of practical jokes, satires and for being disrespected. Only a depraved mind would kill another in the name of God when they cannot create a life. It comes back to the crude mental instinct of sacrifice of human life for ritualistic motives. The days of Abrahamic religions of human sacrifices are gone. Human are more civilized than cave men that could not relate and mutually live in peace and harmony.

Life must not be taken on killer instinct, on sight, unjustly or without opportunity to surrender. No life, no matter how great or low is more precious to one mother than another mother.