Africans Can Only Get Credits For Africans In Africa 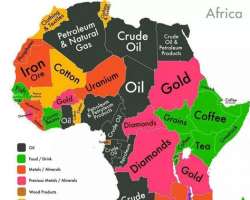 Africa is the only place left for Africans to get full credit for their efforts. Until Africans wake up and present themselves as masters of their own destiny in Africa, no black man anywhere in the world will be respected. As long as those of us that have opportunities to excel as individuals or as a group rely on these comfort zones outside as our last refuge, the incentive to make Africa a comfortable home will elude our children. Think mass deportation to Europe, Asia and Africa Eh?

Most Africa countries started out on the right foot immediately after independence since most realized the roles and value of education, healthcare, industrial estates and agriculture. Farmers were organized through cooperative boards with price stability. Free Education was promoted as a goal to awareness in pursuing expertise that would be inadequate without skill labor on the farm. Teaching, Law and Medicine were the leading professions. (Iwe kiko, lai si oko, koi pe o).

We have made our share of success everywhere but the credit will always elude us unless it is to further the progress of African Continent. Since our success outside Africa is like playing and sometimes winning away game from home. Unfortunately, even Africans do not credit our own until outsiders so decided. It is not a matter of a prophet without honor at home, it is a case of admiring what others say, do and value. Even if most claims did not originate or made in Africa.

There are three types of Diaspora Africans. Many that left after school and experience, some stayed investing heavily at home and those that could not be bothered or got lost after two or many bad experiences swearing never to go back there. One of our 1st generation children that made it: Obama contributed more to Africa than he would have, had he been born in Africa.

If Romney had delivered the world from the worst economic recession since the last depression, reduced unemployment from over 10% to below 6%, killed Osama Bin Ladin and given America Romneycare as in Massachusetts, he would have been hailed as a hero. Despite trumpeted fear of inflation and deficit, both are running lower to the disappointment of unrepentant critics. No one admitted the wise decision to remove chemical weapons from Syria before ISIL got them.

Africans' faults are exaggerated or punished more than those of whites. Dismiss our empathy with Obama because he is our son. Call it common attacks in all mid-term elections. After all Bill Clinton thinks he got worse attacks than Obama just as Richard Nixon thought he got the worst attack. The difference here is what offence or moral turpitude has Obama committed? See this

We have a friend; he used to say he and his children would go back and live in his village, when asked. If he refused to go back, no one knows why he thought his children would ever live there. As our children got older and became teenagers, professionals or losers; the same police, gangs and street violence that had fallen native children started to fall ours. In Chicago one weekend, 23 black children fell to gangs' bullets. Biko, it is not that dreadful in Johannesburg or Lagos.

Nowhere is this notion better displayed than in two instances: judicial process and religion. The two may explain why we have fallen backwards in other fields for which we lack credits. While growing up, we often hear our elders that had travel far and wide starting their sentences with: In civilized countries, that would never happen. It became a disappointment when we saw what happened in civilized countries that would never have happened in Africa. Before you ask what?

An alien from space will be shocked to understand how people interpret cold blooded murders in the daylight. Not once or twice but on a regular basis. It has always been the case and books or witnesses had always told their stories. What are different these days are cameras all over the place, even from mobile phones. Please note that witnesses have always seen the same events slightly differently depending from which side it is viewed.

The jury system is the conscience of western democracy on which our legal system is based. It is still evolving and dynamic compared to ancient Sharia laws. Unfortunately, in many countries outside of Africa both whites and blacks would view the same situation differently and render judgment according to their biased views. Stack differences based on ethnic and political biases are different from motives. The law takes care of motives that are argued by adversaries.

Justice also varies between the poor and the rich, in Africa not only outside Africa. Most of the disparities have to do with ability to afford legal representation. Even legal aid employs lawyers the system allocated money can only cover for the poor. But to turn a pin on its head, what used to be called copious lie, now called different views. Just to justify cold blooded murders.

More important is the way people are judged and credited differently. In the case of children growing up in a society, they see situations in black and white and question any impropriety as if they are born with innate ability to judge right from wrong. So they would question a parent and verify from the other why a brother, sister or friend is treated differently from them. As we get older, we begin to lose the objectivity and our prejudice grows.

This is the reason young men and women are idealistic in their youths and become more conservative as they grow older. Cases in point are returning Africans and hippies of yesterday as conservatives of today. As we grow older, we tend to inherit the prejudice of our community with the fear of losing our old ways of life that is being threatened by new thinking or new comers. Ingrained in these are privileges we stand to lose if the old system is not retained.

If that is the case, one would expect the conservatives in Africa to hold on to our norm and custom. But remember that the only norm and custom that survive are those that can stand up to changes in the society. If the old norm and custom label you a brute for retaining religion that sacrifice human blood, unless you sacrifice goat or chicken instead, you are a brute. The way many reject the label is by baptism into Christian, Muslim or Hindu of mass destruction.

Africans must fight not just cry for justice, fairness and right to equal justice on land we labored or were cheated. But, simply put, it threatens the existence of new owners the same way the American Indians were threatened and displaced. Indeed, entrenched powers will be foolish to yield land and power back to original owners. Mind you, it is the credit Mugabe of Zimbabwe demanded in his Country and what has brought him and his people so much economic misery.