REACH OUT TO MINORITIES BY STARTING WITH ME: OBAMA 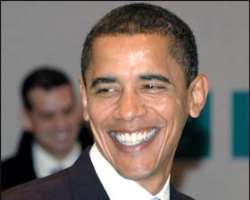 Reach Out was supposed to be a joke at the White House Correspondents' Association dinner for politicians, members of the media and Hollywood celebrities. It was anything but a joke. Republican conservatives had put up fierce fights during the last two elections but American people have other plans for Obama as their President. Yet, they still fight off most his jobs initiatives, nominations and even their own ideas if Obama dares embrace any of them.

But for the stimulus, United States would be languishing in recession like most of Europe. So far, conservatives have lost all their economic arguments not to jump start the economy, but will not relent; so that more stimulus can provide jobs. Some of these were agreed to by all parties like updating and building new infrastructures that have not been touched in 50 or more years. But they were the ones that campaigned on anemic job recovery, while blocking jobs creation.

In spite of all their obstructions, Obama economic recovery is moving sluggishly along and some Africans, Hispanic and other minorities are going back to work. Only if they have implemented building of bridges, roads and helped states and cities employ more teachers, policemen and firefighters that are being laid off, even more minorities and women would be working. States and cities hire more women, so when they lay off, minorities and women last hired suffer more.

As the Federal deficit declines despite apocalyptic predictions, most vacancies in many Federal agencies spread all over the Country have not been filled because Republicans delayed or sat on appointments. A case in point is various judicial vacancies where women and minorities can make a difference. Since Republicans hate regulations, they have blocked nominees to many of these agencies. In short, they have tried to minimize Obama legacy that made them richer.

One would expect all Americans irrespective of party or race would wish that more people should be put to work so that middle and working classes can boost demand for products and services. It will help the small and medium businesses. No, conservatives feed on bad economy so that they could monopolize, stifle competition, buy us on low wages and dominate markets.

After the last election, it was obvious that Republican lost Hispanic votes by a bigger proportion since Baby Bush was elected as President. They actually killed President Bush Immigration Bill and they are ready to kill anything that has President Obama's influence on a new Immigration Bill. For this reason and more, Hispanic senator, Rubio wanted Obama to stay low.

The Heritage Foundation has lived up to its reputation of coming out with report whenever immigration debate is on and always looking for ways to kill it. Their report is that it will cost the taxpayers about 6 trillion dollars to legalize 11 million immigrants already in the Country. Of course, the analysis is one decided adding up social without economic cost each immigrant put into their communities. Not even the contributions of their children shouldering social security.

They have concluded that even better qualified immigrants, are dumbed to earn lower wages than the benefit they received. What they left out are profits made at their expense from low wages in food industries, edge funding gamble, high technologies, care of the aging population, hospitals, private and nursing homes. So, a new Immigration bill that is geared towards skilled workers needed is classed as low wage workers seeking more benefits than they would pay in.

However, there is no mention of the fact that if the older population is not supported by the taxes of the young immigrants, the social and health system relied on would collapse for lack of contributions. Those immigrants contributing today may not get much back in future as more depend on less people. Indeed immigrants that have contributed are being denied benefits now.

Most American studies have shown that legalized workers raise the minimum or starving wages paid, some under the table. The Heritage Foundation study has also neglected immigrants that are job creators for native born Americans. If immigrants do not do the jobs, companies will take the jobs to developing countries as America and Europe manufacturers seek more markets and low wages outside, to tailor their products for international taste and increase profits.

Nothing may overcome conservative inherent fear of immigration that brought their ancestors to America. If America reaches out to minorities in the developing world with fair trade migrants would prosper from international trade in their countries. It would keep workers employed there. Nobody wants handouts, foreign aid or immigration in the comfort of their homes.

But there is no reason to blame Conservatives in America or Europe since they also make money from selling their products and services worldwide when there is less demand at home. While the rest of Europe is in recession, Germany is doing well because its Automobile industry is strong abroad. American products are hot cakes everywhere and young people cannot wait to get their hands on them boosting profits in the USA.

Nigeria like most African countries is a case in point. It has a population of over 150 million. You only need ten percent of those to loot the Country blind. The math speaks for itself. Those fifteen million people are about the same population as some of the countries they emigrate. They spend almost all the income or loot they made in Nigeria there. Their families live outside Nigeria with them on weekends, vacations, schooling, on government and business missions.

When Europeans and Americans go on trade missions, any country that dares protect its home products from foreign products would be accused of preventing free trade, face sanctions and change of political leaders. Free and transparent trade is defined by Europe and America only if they get free access to other countries. This is how China got rich by not playing a 'fair' game.

Since Europe and America can get all the income they want from so called developing countries, there is no reason to reach out to their people in America. If immigrants love America, let them keep their money and contracts at home to develop their countries like Europe and America.