Satan’s 10 commandments to the homosexual lobby 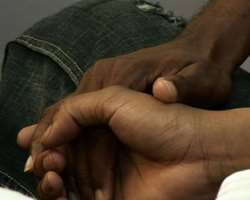 The Bible tells us that Satan has the ability to “appear as an angel of light”. Nowhere is this more evident than in the radical attempt to promote homosexuality in society today as something good. For the purpose of deceiving Mankind and destroying souls, Satan has thus given the homosexual lobby the following 10 commandments.

1) Always see your sexual opponent (anyone who rejects homosexual acts) as the enemy. Project what they see as your sexual disorder onto them by repetitiously calling them “homophobes”; 2) Separate the act of sex from its natural purpose of procreation by referring to all homosexual relationships as expressions of “love” rather than “lust”; 3) Fight to deny those who oppose homosexual acts their right to free of speech. At the same time enforce your own right to free speech on others by copiously using the liberal media and other outlets to label your opponents every unsavory thing from “bigot” to “idiot”. Use the words “equality” and “hate” often and unrelentingly as if only you - the homosexual - understand their meaning. If anyone objects, accuse them of discrimination. Keep in mind that politicians and judges are your friends. Many of them are openly practicing homosexuals and the rest, swayed by power and the almighty dollar, will do anything for your vote. Remember, too, that in today's politically correct and morally relativistic society there is no objective moral order and that it often takes only one civil judge to side in your favor for you to achieve your ends; 4) Use the “race card” unceasingly against your enemy by equating homosexual behaviour (which can change) with a person's color (which, by one's will alone, cannot). Most people don't know the difference; 5) Build yourself up in the eyes of the indifferent masses - who are mere sheep - by claiming to be a modern person of tolerance and peace - one who is accepting of all. The people will believe you because in today's materialistic word people are focused primarily on themselves and their own gain. They have little or no concern for what others do as long as it does not effect them. Ridicule and undermine the intelligence of your more worthy opponents by resorting to ambiguity and sarcasm. Never resist a chance to claim that they are living in the “Dark Ages”; 6) Act and speak as if homosexuals have a corner on the truth and that they alone - not their opponents - can demand of society what is right and wrong. Use every form of deceit imaginable including the use of straw man arguments and false scientific studies - anything that will appeal to the simpleton. Lie, deceive, put on a false front. Pretend you are a friend. Talk of peace and brotherhood. Make pledges of co-operation and mutual assistance. In short, destroy your opponent with a kiss; 7) Confuse the distinction between “hating the sin” and “loving the sinner”. This is an absolute must since everyone - especially parents - know the time-honored value of disciple and “tough love”. This can be effectively achieved by introducing special “anti-bullying” laws into schools that aim at protecting homosexuals from the enemy. If you find that someone suspects your true motives and resists on the grounds that homosexuals should not be given special status in this regard or that such laws are merely an attempt to normalize homosexuality in society, use both the “equality” and the “separation of church and state” card against them; 8) Never lose sight of the fact that God is your ultimate enemy. Attack God and all religion as something oppressive, hypocritical and evil. This is easily done by take biblical quotes out of context to suite your own purpose and meaning. At the same time avoid all talk of the murderous regimes of atheists like Hitler and Stalin; 9) Assure everyone that no religion will be made to suffer from societies' acceptance of homosexuality. Speak always and often of equality and co-existence. Claim, as a sham, snare, and illusion, that tradition marriage and homosexual marriage can live side-by-side in complete harmony. Dismiss as silly and unviable any attempt to show that the “Pill” - which was introduced to separate and tear asunder the act of sex from the gift of life - has led to the disintegrated of the family. At the same time, and wherever possible, work diligently behind the scenes to drag your religious opponent into court whenever his moral values even begin to clash with yours. Test and try every court until you find a judge who is your friend. Especially work on religious adoption agencies and church ministers who lecture on the evils of homosexuality and same-sex marriage in their sermons. Where this is not possible infiltrate the priesthood so as to corrupt religion from within, 10) Redefine joyful and well-established words and symbols like “marriage”, “spouse”, “gay” and “rainbow” and attach them to homosexual acts in order to give sin an innocent, natural and pleasing appeal.

This, in effect, is the homosexual lobby manifesto that is sweeping the world. Yes indeed folks, Satan is among us!

Disclaimer: "The views/contents expressed in this article are the sole responsibility of the author(s) and do not necessarily reflect those of The Nigerian Voice. The Nigerian Voice will not be responsible or liable for any inaccurate or incorrect statements contained in this article."
Articles by Paul Kokoski
14-8-2013  Homosexuality And The Sochi Games5-8-2013  Russia Bans All Gay Propaganda At The Sochi Games4-7-2013  Re: Vatican Clears Pope John Paul Ii For Sainthood24-6-2013  Help For Homosexuals12-6-2013  Justin Bieber’s Recent MeltdownMore...