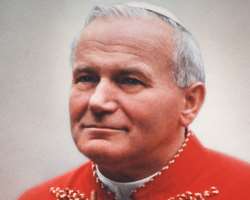 I am thrilled that Pope John Paul II, a man of deep faith, will soon be proclaimed a saint by the Catholic Church! The Holy Father was an inspiration and a model witness to the life of Christ; a shepherd of truth immersed in profound humility and immense love for both God and man.

His many writings and tireless, world-wide pilgrimages of faith have been a source of strength, encouragement, confidence, optimism and enlightenment not only to Catholics but to all men of good will.

A champion of the poor and ardent exponent of Christian unity, the Polish Pontiff was in many and such capacities as teaching, governing and sanctifying, both a beacon of light and salt of the earth.

He lived the Christian virtues in an heroic way. He was slow to condemn and quick to forgive, applying the medicine of mercy to all sinners including the man who tried to assassinate him.

Alongside his historic role in the fall of Communism, John Paul II was the world's most influential and uncompromising defender of the dignity of human life. His tenacious pleas for the development of a "culture of life" and parallel denunciations of the "culture of death" have been instrumental in rallying opposition to war, terrorism, abortion, euthanasia, homosexuality, same-sex marriage, contraception, and embryonic-tissue research.

Disclaimer: "The views/contents expressed in this article are the sole responsibility of the author(s) and do not necessarily reflect those of The Nigerian Voice. The Nigerian Voice will not be responsible or liable for any inaccurate or incorrect statements contained in this article."
Articles by Paul Kokoski
14-8-2013  Homosexuality And The Sochi Games5-8-2013  Russia Bans All Gay Propaganda At The Sochi Games24-6-2013  Help For Homosexuals12-6-2013  Justin Bieber’s Recent Meltdown2-6-2013  The Phenomenon Of Homosexuality In Today’s SocietyMore...