Nigeria: A Nation Of Religious Buffoons 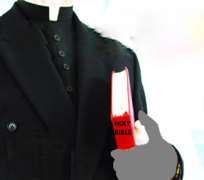 N2.2Billion spent on prayers! The sheer number of zeros you have to add to get that amount was what first hit me. Then again, we spent N2.2 Billion on prayers and God gave us Baba Bubu, dwindling oil prices, a nation gradually being encased by insecurity from all quarters, and an economy in the toilet. Seeing as everything has to revolve around the head(who in this case is Baba Bubu),it follows then that one of two things is possible; Baba Bubu was God's choice for Nigeria, or God never got the money.

If we operate under the assumption that Baba Bubu was God's choice for Nigeria, then it follows that God either hates Nigeria, or Bubu is the mythical leader that will take us through fire for us to become pure as gold. I hope we do not completely get so burnt that nothing will remain at the end of the day.

Fulani herdsmen have emerged, Boko Haram has no plans of taking their feet off the gas, IPOB agitators are growing by the day, and in the South South, kidnapping and armed robbery have escalated. In the meantime, the fuel situation in the country has struck an all-time low, prices of goods and services have skyrocketed, and the common man? Well, if they cannot afford it, let them leave it(I am just trying to sound like Baba Bubu here).So what exactly did N2.2Billion worth of prayers buy for us?

Maybe the money did not get to God. Those corrupt government officials from the last administration must have taken the money for themselves. Or they shared it with "holy men". So what happened to "...in as much as you did this to the least of my brethren..."?Abi those ones no be God brethren? Or they are not the "least" of his brethren?

Either way, the people of Nigeria got the worst end of the deal. We were set back a cool N2.2Billion, yet, what did we get out of it? Let me make a quick list for you

Those five are enough for now.
A few weeks ago, Baba Bubu, toeing the fine path of his predecessor also went to Mecca to pray for us too(according to his media people).There is no need to calculate how much that trip cost us. We should be more concerned with the fact that we need prayers as a nation.

A nation of religious fanatics, in the Northern part of the country, Muslims and Christians fight from time to time in the name of religion(by the way, both of them worship the same God. Only difference is that they have different names for Him, and of course, different "sons"--paths-- of God), while in the South, different Christian denominations daily criticize one another in a simmering cold war.

So we kill for "God", fight cold wars for Him, then turn around and pray to him for our safety, our economy, and everything about the country. We just do things the wrong way, and expect that our very expensive prayers will fix the glaring human mistakes we have been making. God wants us to help ourselves. He probably wanted us to use the N2.2Billion to fix some aspects of our economy. But no, our religious fanaticism, which has led to several deaths by the way, makes us believe that throwing all our problems at His feet, while folding our arms will solve all of our problems.

N2.2Billion for prayers, and we got Baba Bubu, and a nation that is gradually shutting down. Our religious fanaticism has finally tapered off to buffoonery.

*Nnaemeka Oruh, who is Editor-in-Chief of Ikenga Chronicles tweets from @liliemmyz, and wrote in from Port Harcourt.

Disclaimer: "The views/contents expressed in this article are the sole responsibility of Nnaemeka Oruh and do not necessarily reflect those of The Nigerian Voice. The Nigerian Voice will not be responsible or liable for any inaccurate or incorrect statements contained in this article."
Articles by Nnaemeka Oruh
6-7-2016  1st Year Performance Report Of Sam Onuigbo, Member, House Of Representatives22-6-2016  Fashola, Nddc Commit To The Rehabilitation Of Umuahia Ikot Ekpeneroad15-6-2016  Hon. Samuel Onuigbo Moves For Fg To Immortalize Keshi And Amodu10-5-2016  Why Biafra Matters—nnaemeka Oruh5-5-2016  In Defence Of The Side ChickMore...