Saraki Plays To The Gallery! 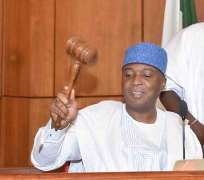 The controversial president of the Nigerian Senate, Dr Bukola Saraki has just been invited by the Code of Conduct Bureau, CCB, to answer questions related to falsity of declarations he made regarding his material assets during his tenure as the governor of Kwara State.

Saraki, a medical doctor has been observed to possess humongous wealth which cannot be accounted for by any visible success in entrepreneurship on his part.

In addition, he deftly inflated those assets over and beyond what he actually owned at that time....in anticipation of what he planned to steal to make up the difference!

In other words, his declarations at the time were out of sync with his real possessions! In the true spirit of man set on a mission....and resolved to accomplish that mission....he made to pad up his estate in many ways!

And the anticipated additions to his estate were at arms length:

He participated in bankrupting Societe Generale Bank in symphony with members of his larger family. He equally engaged in massive looting of Kwara state treasury and subsequently used such monies to acquire massive real estate in Britain and other foreign lands!

The Code of Conduct Bureau, CCB, has already visited Saraki with several charges bordering on false declaration of assets. Saraki is yapping. He says he is being "persecuted" for his political stance. I say he should just shut up and answer to the charges!

My concern is borne out of the fact that Bukola Saraki is a medical doctor!

He is surely a disgrace to the noble profession of medicine. Is he not?