Dasukigate:  Why Buhari  Must  Be On The Alert 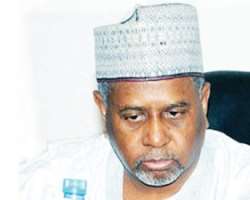 Virtually everywhere you turn today, you are slapped with the sad tale of corruption in high places. The revelations are earth-shattering. And the figures bandied around are mind boggling. Not that one is not aware that corruption walks on all fours here. What remains a riddle is how the country has managed to survived despite the merciless looting by financial terrorists!

Since our return to civil rule in 1999, if there is one thing successive governments agree on as a barrier on our journey to development as a nation, it is corruption. Indeed no nation grappling with Nigeria’s kind of blatant corruption can experience any meaningful development. However ,one surefire way for every new Nigerian leader to warn himself to the hearts of a great number of Nigerians is to talk tough and spit fire on matters of graft. Whether they are sincere about the fight against the hydra-headed monster is left for the gods to decide.

In the last administration, for instance, we had a leader who mouthed the anti-corruption rhetoric and made of song of his zero tolerance for corruption. But his body language gave him out as one who actually romanced corruption. At least ,he told us ‘’stealing is not corruption’’. If stealing is not corruption, going by the logic of the former Nigerian leader, how then do we convince him that sharing $2.1b defense funds by his former National security adviser (NSA) to his friends and partymen is an act of corruption?

Ever since the story of $2.1b misapplied defense funds broke many Nigerians are still alarmed at what they deem the height of wickedness in high places. Was it up to two years that Governor shettima of Borno State told the world that the Nigeria army was ill-equipped to fight Boko Haram Insurgents? As usual, shettima attracted knocks, sticks, stones and invectives mainly from political chauvinists who view issues from the prism of sentiments. Today, the Borno governor has been vindicated by the stench emanating from the office of the former NSA.

Curiously, former president Goodluck Jonathan either looked away or slept when the money meant to secure Nigeria and Nigerians was funneled into his campaign to secure second term in office, even when the otuoke -born animal scientist swore that his ambition was not worth the blood of any Nigerian.

Without any atom of doubt,one indisputable reason Dasuki played “Donatus” with the $2.1b defense fund is the fact that the former NSA and his cronies see the victory of the PDP in the 2015 elections as more important than the millions of IDPs in the Northeast. Yobe can convulse. The entire Borno can burn, a PDP victory is all that matters. After all, the party’s chieftain, Chief Adeseye Ogunlewe, attempted to justify the diversion of defense funds for partisan purpose in an interview with Punch Newspaper lately. Ogunlewe did not pretend about his position on Dasukigate. Hear him: “If one wants to contest for an election, will the person not have money to spend? Won’t money be shared? Whatever is happening is normal.’’

Ogunlewe is not too far from the truth for what is normal here is actually weird in sane climes. That is why heads would have rolled through the guillotine in countries where thr punishment for stealing misappropriating fublic funds is nothing but death.

Beyond excoriating Dasuki and all the beneficiaries of the blood money he gave, the diversion of defense funds for partisan purpose should provoke a national debate about how parties in this part of the world are funded . How, for instance, has the PDP been funding its Presidential elections after 1999? How have State governors of all the rulling parties-PDP, APC,APGA, etc.- at the state level been funding their campaigns?

The only reason Dasuki is in the eye of the storm is because his party was displaced at the centre. We probably may never have the faintest idea of the blood money shared by Dasuki and the gang if PDP’s dream of rulling for sixty years had not been cut short . But the buck stops on Jonathan’s table.

It is apposite to state that corruption did not die with the PDP on May 29, 2015. Corrupt elements are also in the rulling party. Now that the call for Jonathan to speak up on the corruption that happened under his watch is gaining traction, the lesson Buhari can glean from the Dasuki episode is: One day, it will also be his turn to take responsibility for all that happened under his watch. This is why Buhari must be on the alert.

Disclaimer: "The views/contents expressed in this article are the sole responsibility of the author(s) and do not necessarily reflect those of The Nigerian Voice. The Nigerian Voice will not be responsible or liable for any inaccurate or incorrect statements contained in this article."
Articles by Ladesope Ladelokun
7-8-2016  When Honour Bites The Dust7-8-2016  Anti-corruption War: No Sacred Cows21-10-2015  Boko Haram: Winning The Peace23-9-2015  Saraki And Ccb’s Book Of Remembrance29-8-2015  Saint Fashola’s Cross And His DisciplesMore...