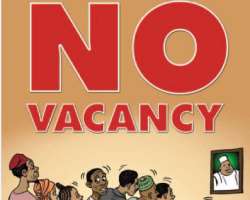 Whether anyone likes to accept it or not the bitter truth is that 80 per cent of our GRADUATES are unemployed in Nigeria today whilst 51 per cent of our PEOPLE are also unemployed. As a frightful and grave consequence of these shocking statistics, which I happen to believe may well be a world record in terms of unemployment, a terrible tragedy occurred in various cities in our country on 15th March, 2014.

On that day approximately 520,000 of our youths gathered together in sports stadiums in various cities all over our country for an aptitude test for just 4,556 jobs that were available in the Immigration Service. These staggering numbers were given out by the Ministry of Internal Affairs itself. 68,000 of those youths gathered at Abuja's National Stadium alone and sadly 10 of them were were crushed to death in a stampede whilst looking for those jobs whilst many others were injured. It did not stop there. Another 20,000 youths gathered in the stadium at Port Harcourt, Rivers state for aptitude tests for the same 4,556 jobs and there was another stampede there as well in which 4 of their colleagues were killed and four more were so badly wounded that they remain in a coma up until now.

Similar gatherings for the same Immigration aptitude test took place in cities all over the country all for a shot at the same 4,556 jobs and three young pregnant girls together with three male youths were killed in a similar stampede at the stadium in Minna, Niger state. The deaths of youths were also reported in stadiums in some of our other cities as well including Benin and Kano.

The only crime that all these children that were either killed, maimed or injured in these horrific stampedes in the stadiums of all these cities like Abuja, Port Harcourt, Minna, Lagos, Kano, Kaduna, Benin and elsewhere had committed was to try to get a job, to fight for a better life for themselves and to try to secure their future. What a tragedy.

One day Nigerians will appreciate the importance of facts, figures and statistics and the consequences of tolerating atrocious, lousy, insensitive and unaccountable governments. They will also understand the implications of having a government that has no qualms about taking advantage of the pitiful plight of it's own youths and citizens and scamming them in the most obvious and shameful manner.

Why should anyone be surprised that 520,000 of our youths gathered in stadiums all over the country on the 15th March 2014 just to apply for a relatively tiny handful of jobs that are available in the Immigration Service? This is so SIMPLY because there are NO jobs available for these children in our country.

I repeat 80 per cent of our GRADUATES are unemployed and 51 per cent of our PEOPLE are unemployed. Sadly these figures have been confirmed by various international organisations even though the Nigerian Federal Government often seeks to deny them. Given this deplorable state of affairs why won't our youths die and be killed or injured whilst looking for the few jobs that are available? Why won't they gather in stadiums all over the country in their hundreds of thousands just to do an aptitude test for a job in Immigration for which there are only 4,556 vacancies? Why should anyone be surprised by this madness and this turmoil? Why should anyone be moved by this horrific carnage when it is now a regular phenomenon in our country for children to be slaughtered. If they are not butchered whilst at school by Islamist fundamentalists they are slaughtered whilst they are looking for jobs from a heartless government which has effectively destroyed their future.

Yet look for jobs they must because these children and these youths are desperate and they are suffering. To make matters worse they are also being taken advantage of and scammed by their own government who are desperate to extort money from them by all means available. If this were not the case why would the Comptroller-General of Immigration and the Minister of Internal Affairs order that each and every one of those youths that flooded the stadiums in their hundreds of thousands and that stood in the sun should be made to pay 1000 naira each for the forms that they were to use to do the aptitude test at the various stadiums all over the country.

Someone was set to make a whole lot of money considering the fact that 520,000 youths were involved in this shameless exercise and the amount of cash that they must have made runs into at least 2 billion naira. The whole thing was just a massive and monumental scam to extort billions of naira from these poor, young and innocent souls and many of our youths have paid for it with their lives.

This is what President Goodluck Jonathan's Nigeria has done to them. We now have an army of angry, jobless, frustrated, disillusioned and desperate youths on our hands in this country and consequently we are literally sitting on a keg of gunpowder. May God help us and may He forgive us for failing these children and destroying their futures.

Other than this I will say no more on this matter because the truth is that most Nigerians no longer ''give a damn'' when blood is shed and when lives are taken. This is so even when those lives are those of children. Permit me to give an example. On the very same day that our youths were dying in stadiums looking for jobs with Immigration another 100 innocent people were being slaughtered by ''unknown gunmen'' in southern Kaduna and no-one seems to care. Again only two days before then, on March 13th 2014, 110 innocent Nigerians were butchered by what were described in the press as a group of ''fulani gunmen who were on motorbikes'' in Katsina state whilst the President was on an official visit there. What a tragedy.

Under President Goodluck Jonathan we have become a nation of vampires where the death of innocent children and youths means nothing and where we cannot even provide jobs or a decent standard of living for our young ones. Instead we attempt to scam them and to extort money from them. What a government, what a country.

If our government had any sense of decency, justice or accountability the Comptroller-General of Immigration and the Minister of Internal Affairs would have not only been compelled to resign or fired by now but they would also have been arrested and would be facing criminal charges for, at the very best, criminal negligence and manslaughter and, at the very worse, accessories before the fact to murder. Yet we know that that will never happen as long as President Goodluck Jonathan is in power. Far from it.

As a matter of fact instead of bowing his head in shame and showing any sense of contrition or remorse the Minister of Internal Affairs has come out shamelessly and blamed the dead youths themselves by saying that ''they did not exercise enough patience during the exercise''. May God forgive this man. I wonder if he would have expressed such sentiments if any of his own children had been killed in the stampede.

Permit me to end this contribution by quoting from a moving email that I received from a dear Nigerian family friend who herself is a mother and who presently resides in the United Kingdom with her family. She sent it to me the day after the tragic death of the youths in the stadium. I have obtained her permission to share her words in this write-up but for obvious reasons I will not mention her name. She wrote-

''Good morning uncle Femi. I honestly don't know where to start from. My heart is so heavy. What is it about Nigeria that (or is it we as a nation) nothing good comes out of the news. I'm beginning to wonder if there is nothing wrong with me when I go through websites expectant of only bad news. Why don't I ever expect anything good to come out if Nigeria? I don't even know what to tell my children again. I try to give them a balanced view of the country but something would always come up to make nonsense of that. Why would any sane person want to come and live in that madness called Nigeria where nothing is guaranteed. Life is not guaranteed, jobs are not guaranteed, education is not guaranteed, security is not guaranteed, a decent daily meal is
not guaranteed. I could go on and on. I came to a realization recently which is self-preservation. Abi shebi it's life/self first. When I saw the early morning pictures of the crowd of youths at the Abuja stadium my heart just sank because I could almost write the script of what would follow. And so I waited (expectantly?)and wasn't disappointed. Would anything come out of it? No. Would life go on? Yes. Do they care? No. And the moron of a Minister had the gall to say that candidates died because of ''impatience''. Meanwhile the so-called aptitude test was just a ruse. They had handpicked their preferred candidates weeks ago. The crowd alone told me that we have a serious problem of youth unemployment yet Ngozi Okonjo-Iweala would come out and be reeling stupid figures. Please tell her that she's not fooling anyone. As if the unemployment is not bad enough government is opening more universities like daycare centers and still granting licenses for private universities. Who is going to absorb these teeming unemployed graduates? Where are the industries? Are you creating an enabling environment for investment? Infact I'm just done with agonizing over Nigeria. Self first please!''
Her words and counsel moved me to tears. As far as I am concerned she captured the mood very well and her simple yet succinct submission is reflective of the thinking and deep pain of millions of Nigerians from all over the world that are fast losing hope in their nation. Yet what can we do but just continue to hope and pray. What can we do for the future of our children and to better the fortunes of our nation? This is indeed food for thought. As the bible says, ''may God deliver us from bloodthirsty and evil men'' and ''may the balm of Gilead heal our wounds and comfort our mourning souls''.