The Lingering ASUU Strike And The Unending Hypocrisy 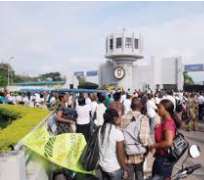 Needless to bore you with the tautology of ASUU being on strike for over three months and still counting, for it's a notorious fact that adds nothing to meaning. I simply want to highlight and articulate three distinctive and noble points that not only puncture ASSU's bubbles but gives credence to the whole malaise as a hypocritical charade. ASUU has put forward several logics in justification of the strike while also pontificating that it will linger till the 2009 Agreement is implemented to the fulcrum.

They have puritanically forced the federal government to elongate the retirement age of university lecturers from 65 to 70 years; they have demanded and obtained the right as the only university lecturers in the world to be paid allowances for supervising projects and theses of students in the name of “Earned Allowance”. This they summed up to arrive at N93bn. They want autonomy to be granted to the Governing Councils of government owned universities while demanding that Federal Government allocates 26% of its annual budget to funding the federal and state universities alone. Furthermore, they want federal and state governments to transfer ownership of the landed assets of their universities to the il(legal) structures and entities formed by the lecturers and universities for that specific purpose; also, they want to be allowed to award contracts for infrastructural development in these universities.

Looking at some of these demands, apart from the fact that they are outrageous and incongruous, it is crystal clear that neither of the issues at the front burner is directly aimed at improving academic excellence or in the best interest of the students. It's all for their pecuniary gains.

In fairness, the federal government also deserves some strokes of Cain and scolding for even appending their signature in the first place to such a ridiculous agreement in 2009. Such an agreement can only be signed while under duress or at gun point with the trigger already pulled. But to think that the federal government signed such is mostly unfortunate. Could it be to score cheap political points? That's an issue for another day.

However, Federal Government has neither denied signing the hallowed agreement with ASUU nor that the educational sector don't need proper funding, but they are saying that giving that our Appropriation Act for 2013 was already in motion and halfway before the strike began, the full implementation is unrealistic. But even at that, they have rallied round to fork out some N130bn; with N30b mapped out for ASUU as part of the N93bn they are putting forward as the sum of the Earned Allowance from 2009 to 2013. The remaining N100bn has been disbursed into the universities for various infrastructural revitalization and developments.

But while many have busied themselves with other issues on the front burner, I want to ask these few critical questions: First, ASUU is claiming that the government owned universities are churning out “half-baked” and unemployable graduates, have their counterparts in private universities fared better either? Given that they have much more sophisticated libraries, well equipped laboratories, conducive lecture theatres and what have you. Also add that many of the lecturers in private universities are from the government owned universities and are members of the striking ASUU.

Secondly and more befuddling, why is a university like University of Ilorin who isn't part of ASUU's hypocritical struggle nor a member of the Union, get a share of every dime that accrues from the struggle or whatever the Federal Government coughs out to disburse into her tertiary institutions?

Thirdly, why would ASUU claim to be on strike with all its members, yet project supervisions, examinations and Post university examination for Jambites are also ongoing simultaneously in most universities? Even in University of Ibadan where the whole ASUU unionism began? For instance, it was reported that final year students of Law in University of Ibadan were allowed to write their final year exams few weeks ago so as to be able to catch up with Law School in November this year? You see, all these give credence to the whole struggle as a mere farcical charade!

Furthermore, why would a state university lecturer who is not owed a dime by the state government also align with ASUU in striking? For instance, why would a lecturer from Benue State University join ASUU to hold the Federal Government by the scrotum and waste away students' precious time and delay destinies? In spite of the state governor, Gabriel Suswam stating authoritatively that they are not owed a dime. Apparently one of the problems of a “kwashiorkor Federalism” like ours.

Suffice it to submit that the only thing left for the nearly four months-old strike to be called off is the Earned Allowance. The Federal Government has addressed many of the realistic issues raised by ASUU in the hallowed 2009 Agreement, some of which are periodical and sequential. Even in the N93bn put forward as the amount the Federal Government is owing them, N30bn has been coughed out by the NEEDS Assessment Committee chaired by Gov. Gabriel Suswam. The government furthermore pledged to include whatever is remaining into the 2014 Appropriation Act as there's practically nowhere the whole money can be forked out from, but ASUU is not shifting ground in a struggle. This is most unfortunate because in every struggle, every party must be willing and prepared to shift ground. And I ask, is the maxim now from “Town to Gown or from Gown to Town”? Because it's obvious ASUU don't understand the principles of a struggle.

While democracy has opened the window of avenues for a 'mere' university union to ground the efforts of a federal government in the universities, and whatever the gods maybe that allows for an employee to dictate to the employer who gets what, when and how; it is convenient to state categorically that, since ASUU is hell bent on sustaining the strike and are feigning deaf ears despite calls and appeals from many quarters to call off the strike and get on with the normal academic work while deliberations also continues sideways, there is a tendency that the strike may linger till January 2014. This is validated when you consider that the Federal Government has said –without equivocation – it has no money to give to ASUU again except it inculcates ASUU's demands into the appropriation act. If we are to have a repeat of what happened last year - this year, the appropriation act for 2014 would be presented sometimes in November or December to the National Assembly for scrutiny and approval, so that it will take effect from January 2014.

So, all in all, Nigeria students (both undergraduates and post-graduates) have got everything to lose. Pity such a Nation!

Disclaimer: "The views/contents expressed in this article are the sole responsibility of Simeon Christian Chukwu and do not necessarily reflect those of The Nigerian Voice. The Nigerian Voice will not be responsible or liable for any inaccurate or incorrect statements contained in this article."
Articles by Simeon Christian Chukwu
5-10-2013  Two Things Are Involved In Nigeria Politics Today6-9-2013  Noa And The New Nigeria28-8-2013  Nigeria Police: A Force To Reckon With4-4-2013  Nggt: Why Is Labaran Maku Junketing?20-3-2013  Before We Pardon My Oga At The TopMore...