The Fleecing of Akwa Ibom State: The Secret Agenda of Godswill Akpabio 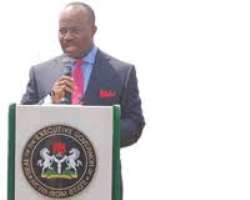 His crumbs-from-the-table-eaters like to describe him as "Nigeria's Best Performing Governor." What they don't mention in their claims is how much money they are being paid to plant all those Akpabio this and Akpabio that in the media. What they also don't mention is the purpose of such a media blitz in praise of Godswill Akpabio.


Any Nigerian who cares to know will agree that Akwa Ibom State collects more money from oil allocation than any of the 36 states in Nigeria. We are talking about billions of naira per month. In the month of July, it received nearly N25 billion in federal allocations; this amount does not include the internally generated revenue of approximately N10 billion per month. Those in Akwa Ibom who are aware of this receipts are wondering where all the money is going. Other than a few constructed roads around Uyo metropolitan area, there is nothing else that Akwa Ibom State can show for all the money it is wrecking in on a monthly basis.


One would think that with all the money, human development would be a priority; it is not. Since April 2012, salaries have not been paid to state employees. Hunger and starvation among the general population is on the rise. Poverty has become endemic in a state that takes in billions of naira, a month. Hospitals are bare and the walls are crumbling. Education is in total shambles, especially since the gimmicks which Akpabio put out to the people when he lied that education is free; it is not and what Akpabio does not tell the people is what he does with the millions of naira which Akwa Ibom State receives from the federal government for the UBE program. Anyone who makes a casual visit to Akwa Ibom will quickly find out the impact of unemployment, especially among the youths. Several youths with universities diploma are sitting at home---unemployed!


While everyday living is tougher and tougher for the masses, Akpabio is using their money to live a life-style that even the European Kings of ancient would envy, if they were to rise up from their graves to see the life-style which Akpabio is living today. First, his immediate family members---from relatives of his wife to all his brothers--- are the ones that control the state economy. Anyone who is ready to secure any gainful employment must be willing to register in one cult-group or another that swear allegiance only to Akpabio; a reminiscence of the SSS and SAS Gestapo of Adolf Hitler's era.


What many Akwa Ibom people may not know is the amount of money Godswill Akpabio spends on a monthly basis to secure favorable publicity in Nigeria. Intelligence gathering has revealed that, using Aniekan Umanah (Akpabio's Information Commissioner) as a conduit, Akwa Ibom State pays out one billion, a month, to owners and editors of major publication establishments in Nigeria. Many of these people are officially retained as Media Consultants. Their role is to make sure that they do not allow any negative information about Godswill Akpabio to feature in their papers, radio, and television stations. So far, they seem to be doing a good job. Anyone who wants to put this to test should try to publish a paid advertisement that criticizes the policies of Godswill Akpabio. No major Nigerian newspaper will accept the material, no matter how much one is willing to pay. The next paragraph is going to explain why Akpabio is doing this.


Those who are close to Godswill Akpabio have confirmed that he is discretely campaigning for President Jonathan to pick him as his Vice, if he (Jonathan) is going for a second-term. Or try to align with a Northern presidential candidate. Sources say the reason Akpabio is paying for a photo-opportunity with influential Nigerians, such as the recent picture of him and the Sultan of Sokoto, is a ploy to pressure those people to support his dream of becoming the next Vice President of Nigeria. To fulfill his dream, sources say Akpabio spends at least N2 billion a month, or at least 10% of monthly gross revenue of Akwa Ibom State.


Since May 2011, when Akpabio was sworn in for another term over an election that was well known as rigged, he has handed over the day-to-day running of the state to his Deputy, Mr. Nsima Ekere, while he devotes his time to travel around the country campaigning for the VP slot. All those who are very well versed in Nigerian politics agree that Akpabio is wasting the people's money. According to one expert in Nigerian Politics, "If Akpabio thinks that he can be a Vice President by bribing his way through everything, he is deceiving himself. What the man doesn't know is that he is just one step to prison. He is walking around now because of Immunity Clause."