A Letter to Larry Esin: You are wrong---Ibibio Will Never Support you for 2015 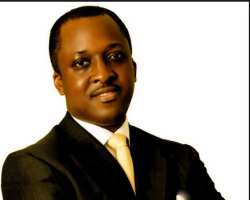 Though you and I have never met, but after following your political philosophies from afar, I became one of your strongest supporters, until now.

Not too long ago, when you claimed that you entered the 2006 race in order to help Akpabio win, many indigenes of Akwa Ibom State did not like what you did. But, I stood by you. This is what I wrote on the Internet in response to all the opprobrium that was heaped upon you: “As far as I am concerned, Larry Esin is still my kind of politician. And whenever he does something or engages in any act of treachery, I will be the first one to come out and say so. For now, I don't believe he has committed any offense for telling his side of history, as he saw and experienced it. Please let's leave Larry Esin alone and let's be fair" (https://www.facebook.com/permalink.php?id=169689976414126&story_fbid=556603321056121). Well, my brother, the time is now. My support for you is gone with the wind, because you disappointed me and many others who supported you.

On January 15, 2014, in response to what Barrister Iyanam wrote, this is what you posted to your friends on Facebook: “I can almost guarantee you that I will get more Ibibio votes in a primary or general election than Umana Umana. The believe that ethnic voting is an absolute phenomenon is wrong and misguided. In 2006 it was the Ibibio votes that placed me 3rd in the PDP governorship primaries in spite of my late entry into that race”(https://www.facebook.com/LarryEsin).

Mr. Esin, you are wrong; you will never again receive the same level of support you received from the Ibibio in 2006. Ibibio has now wizened up and they are determined to guard against the tendencies of self-centered politicians, such as you, to exploit their God-given traits to always be willing to accommodate and include others, in the spirit of oneness.

Ibibio find you untrustworthy for them to entrust their future and their political destinies in the hands of someone like you, whose mind flip-flops like the pendulum of the type of a wall-clock which I grew up to see my father own.

Here are some of the reasons we, the Ibibio, cannot trust you---in your own words:
1. “Governor Akpabio is too desperate. I am sorry to say that, but for a man that claims that he has done so much in Akwa Ibom, that alone should sell him to the electorate. I keep asking what about other things he has done in Akwa Ibom. He has introduced cultism as a way of life in Akwa Ibom, and he has insulted our traditional institutions)Larry Esin. (http://www.thenationonlineng.net/2011/index.php/news/3765-cpc-accuses-akpabio-of-desperation.html)
2. As a governor, I think Godswill has not been able to articulate exactly what it is that he wants to do for the people of Akwa Ibom State. He has a good heart and good intentions. His problem is his lack of capability to communicate that to the people of Akwa Ibom State. His failure to communicate properly has encouraged the wrong sets of people to engulf him, isolate, and mislead him. Now they have put him in a situation where it will be very difficult for him to get himself out of it. That is my personal assessment of Godswill Akpabio. Larry Esin (http://weeklyinsightng.blogspot.com/2010/01/i-will-be-surprised-if-udoedehe-gets.html ).
3. The only accomplishments governor Akpabio has done is building the government house, if you want to call that an accomplishment. Another accomplishment is the building of Itu Road at a cost of N1 billion per kilometer. Then the Fly-over, who really needs it in Akwa Ibom and can you imagine how many houses could have been built with the money? The other day, Obong Victor Attah told me that Godswill has not added even one classroom block to what he left him. Obong Attah also told me that Godswill has not added even one hospital bed to the numbers he left him. So, what accomplishments are we talking about? Larry Esin (http://weeklyinsightng.blogspot.com/2010/01/i-will-be-surprised-if-udoedehe-gets.html
4. "We were not ready to fold up so I told my people that we were entering the governorship race. I declared on November 12 2006 and the election was on December 12 2006. We had just 30 days to campaign, I was the last candidate to declare and this happened after the caucus meeting. What people did not know was that I entered that race to help my friend Akpabio because Oron delegates had been locked up for a certain candidate and by entering the race we were able to break the delegates which helped Akpabio to win" Larry Esin ((https://www.facebook.com/permalink.php?id=169689976414126&story_fbid=556603321056121).


Dear Larry, from this few examples of your flip-flop utterances, I hope you can now understand why Ibibio people may find it difficult to trust you. And it may interest you that it is not only the Ibibio nation that are having problems with you, the Oro nation, which you hail, also have issues with your credibility.

As soon as you made public your intention to contest for the Hilltop Mansion, the “Oron Interest Group” released the following in its press statement; “OIG, a front-line sociopolitical group in Oron Federal Constituency, in a widely circulated press release said Mr. Esin, a governorship aspirant on the platform of PDP in 2006 never told delegates from the area that he was contesting the election in order to clear the way for “his 'friend,' Governor Akpabio, to win… Oron delegates voted out of genuine love for Mr. Esin as representative of the Oron interest, which was to make sure an Oron man won the primaries, based on the Afanghi Spirit… Thus we want a person who has sincere love for the entire people of Oron Federal Constituency and who is committed to making sure the people of the area are better placed in the scheme of things in the state by producing the next Governor of the state in 2015…We, therefore, advise our brother, Mr. Larry Esin, and his likes who are interested in the Governorship of Akwa Ibom State to desist from planning to use the people of Oron to massage their personal egos. That time has gone. We are now more enlightened and we cannot be used the second time.” (http://blog4all-com.blogspot.com/2013/10/oron-group-to-larry-esin-you-cant-use.html)


I can only speak for the Ibibio because that is my lineage. Sir, the Ibibio are angry with you because if you did not concede for Akpabio to win and became a governor, it is very likely that majority of Ibibio men and women who have lost their lives would still be living today to the joy and benefits of their respective families.

Despite all the outcries against, and your awareness of, all the atrocities that Akpabio had done to the Ibibio, there was never a time you came out to publicly denounce or condemn the atrocities of Akpabio over those killings of the Ibibio. Instead, in order to obtain his support so that you can comfortably succeed him as the next governor, you have been going around patting him on the back and singing his praises as a man you would not mind, if elected, to emulate his good governance and continue on his good policies.

Sir, the rest of the ethnic group may support you in your guest for governorship, but Ibibio will not. It is very likely that I will never cast a vote against you, but I am geared up and ready to influence Ibibio people so that they do not make the same mistake they did in 2006, which saw the emergence of Akpabio as their killers.

Disclaimer: "The views/contents expressed in this article are the sole responsibility of the author(s) and do not necessarily reflect those of The Nigerian Voice. The Nigerian Voice will not be responsible or liable for any inaccurate or incorrect statements contained in this article."
Articles by Ikpafak Thompson Essien
27-4-2016  In The Spirit Of Reconciliation: My Encounter With (sen.) Godswill Akpabio19-9-2014  Akwa Ibom State Politics: Why Isaac Achong Was Posted To Akwa Ibom State17-9-2014  An Open Letter To Akwa Ibom State Commissioner Of Police---isaac Gabriel Achong2-3-2014  Godswill Akpabio Cannot Impose A Leader On The People Of Akwa Ibom State7-1-2014  The Real Reason Alhaji Tambuwal Visited Akpabio In UyoMore...