Up Up River Nun 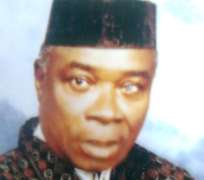 You do remember the Memoirs of His Royal Highness Chief Frank- Opigo, DOWN RIVER NUN. Then you are likely also to recollect that Nun River stretches downwards through the swampy terrain of The Niger Delta in Southern Nigeria. Two great things join in one you may surmise. Well here I am riding the crest of the turbulent waves on the brownish River Nun. The bright November sun is biting above me in this boat. I am headed for the funeral of the author at Angiama, about 45 minutes boat ride from Yenagoa the capital Bayelsa State. So far my luck has held out. I boarded a government boat reserved for the event caterers and received a lifejacket. Others were not so lucky or didn't need one. The mud colored river appears ever widening as you could discern massive shore erosion on the two flanks. Farmlands are being lost to the river, and even as we struggled along the bumpy ride, praying, trees were falling off eroded banks on to the river. This river probably began life as a line of water now is stretching to multiple football fields. I ruminated over just how much has changed since this book drew attention to this Region.

HRH Chief Nicholas Abo Frank-Opigo, Dawai 111,Amananaowei of Angiama was a Statesman, politician, educationist, sportsman and philanthropist. This man has the proverbial nine lives. His Memoirs details his brushes with death while serving his people and Nigeria. Amongst other accounts, In 1920 at home he quenched his thirst with a bottle of water that turned out to be Kerosene; In 1954 he was electrocuted by a faulty fridge and remained unconscious for a while; in 1970 as Administrator of Yenagoa province, petitioned against by disloyal was to face the firing squad after indictment by the Rebels but as the D day broke, the Civil war ended.

We approach a large boat and the waves knotted against us making our driver to meander dangerously sideways. That was close I thought to my self. I couldn't imagine getting into that water even with a lifejacket. If only this River is transparent. Could this river keep fish alive? I wondered aloud how the developed world to keep their waters so clean and full of fish. Someone reminded me that they did not allow toilets and soaker ways on beaches like us here. Environment meant so much to them that much of the excess money left for embezzlement was spent on purifying waterways and providing decent transport facilities. He cited the case of South Africa tourist waterways and beeches.

Arriving Angiama safely was enough reason for a short prayer of thanksgiving. Here you cannot expect the usual- like making GSM calls. Well there is off and on reception for Zain. There are no transport vehicles. The streets are narrow but straight thanks to good planning under His Royal Highness whose rule began in 1989. You will easily notice the Road concreting with cement by NDDC of recent running through two of the four parallels- to- the -beach street town. All roads lead [literally] and in reality to the Royal Highness's place where preparations had reached fever pitch proportions. His magnificent tomb adorned with statue was in the works. During our stay the town experienced 24 hours uninterrupted electricity being hooked to a generator. Uptown behind the Kings palace lays the seemingly abandoned gas Turbine station from Imiringi in the bushes. This town is unique in many ways. Everywhere you go you encounter a torrent of angry kids. O, this must be a baby friendly little town, I told myself. Many an indigene had never seen Motor car except for one Keke NAPEP mini cycle car brought in to ferry the Chief from the beach during his twilight days. To charter a boat from Yenagoa goes for ten thousand Naira-not to talk of a Barge.

It was to be a week long holiday for the people of Angiama. Saturday 27th November 2010 would go down in the annals of Angiama history as the day when the world gathered to honor a man of many parts who was aged 84.As happens often with passing of great icons, the heavens opened excessively, perhaps a little too early in the day and thereby determined the order of events. Happily it went well. President described him as “a nationalist, an indefatigable campaigner in the vanguard of the struggle for the emancipation of the Ijaw Nation, leading to the creation of Rivers and Bayelsa States.” Governor Timipre Silva of Bayelsa State who flew in and out on a helicopter described the deceased as “a man of vision whose vision has been an enormous positive influence in the society around him.” For Governor Rotimi Amaechi of Rivers State, “His legacies especially the founding of Niger Grammar School at that time, are eloquent testimonies of his visionary actions for human capital development of his people.

Lets I forget, I am here to represent the Rivers State branch of the University of Ibadan Alumni Association at the funeral. This was a truly great Ucite as those of them who graduated in old University College Ibadan an affiliate of University of London would often prefer to be distinguished from the new great Uites. He was a founding member and inspiration for this Association. In an Obituary notice published in the November 2010 University of Ibadan Alumni Association news magazine, the Association described the 1949 Alumnus who graduated in 1953 as “the first graduate of central/western ijaw land who later served as Assistant Registrar, Students [1954-1956]”

Mr Nworisara aspired to be President of Nigeria in 1992