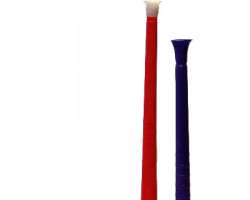 The 2010 World cup may go down in History as a Vuvuzela rather than South African world Cup. These horns have had more impact on the outcome of matches in the first round than teams and individual players. Arguably much of its impact has been negative rather than positive .For some people it has raised the noise levels in the stadia beyond human endurance. For others it can induce hearing problems on fans and players. I think that we should not dismiss its effects on human beings as well as on the overall objective of football.

Football is a law driven activity. It is played in an atmosphere of decorum: the reason being that Football remains a game for the brain and body. In full glare of the people players must be able to think fast of the course of action to take in other to get themselves and team out of tight corners. Each sound translates to the kind of decision players will make; whether it is the sound of the referees whistle or the cheering of fans or the call of the coach. These sounds must be distinct for a proper decision to be reached. Imagine a player about to kick the ball and unable to decipher that the referee's whistle has gone because the Vuvuzelahas become lauder than the referee's whistle and therefore he is condemned to be penalized for not reacting appropriately to the referee. Too much noise affects the human psyche and in recognition of this both national and international laws recognize it as a human right to have a low noise environment. It recognizes that man can hardly perform to his utmost capacity under noisy conditions. It can also affect the player's mental state in the sense that they tire out quickly and become angry too quickly on tackle. Players may get wrong signals as to expectation of the crowd because the noise is not organized as to return signals of events in an organized manner.

In becoming louder than the umpires, the stadium becomes less of an organized arena, lawless and often demoralizing to all because suddenly you have a lawless place with thousands of umpires. Little wonder that many red cards have come from inexplicable situations. Some tackles are viscous and you wonder whether the players were thinking about the consequences of their actions or whether the referee realized what he was doing. Some goals have been awarded that should not have been so .Many teams tire out so easily and for this reason goal scoring has been low except during the first half. Noise is tiresome to people on the run especially when they can make nothing out of it.

In the old stadium situation, the human voice has been accepted as the limit of favorable noise, acceptable by players. Players attune themselves to hostile noise at away games and it is balanced for all teams to have home and away games. Everything in football must swing in spiritual balance as willed by the Creator. This is why football is the quintessential school of life on earth. It obeys the laws of balance as well as other laws of nature. For this reason right decibel of noise to engender human creative condition is paramount for high performance of man in this micro field of life.

I pray not but If we continue like this then one day laud speakers will be used by fans in side the stadium and the lauder your loudspeaker the more control you have over the game and then all other qualities will take a back sea. I hope we don't ever get there for you too can sense the greatness of the confusion it could bring upon the beautiful game. As for the outcome of the 2010 World cup, those teams from Africa and South America with players who can withstand high noise levels may do well. Look out for local players not those who ply their trade in low noise Europe. For African teams, those with foreign based players may not do very well as expected because of the noise. Those teams who concede early goals will find it hard to come back in the second half of the game except it is a game between two European teams with less Vuvuzela influence. As we approach to the finals, the influence of noise may diminish or increase depending on the teams on parade. If Vuvuzela is not banned or tuned down, it is likely that the best teams may not win the 2010 World cup in South Africa and ultimately football will be the loser.