How Ooni of Ife showcases cultural heritage with Olojo festival 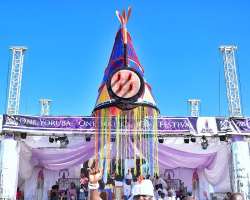 The Nigerian Voice, Olawale Adewale in this piece writes on how the revered traditional ruler in Yoruba land, the Ooni of Ife, Oba Adeyeye Enitan Ogunwusi showcased the richness of cultural heritage with the Olojo festival which was attended by tourists from far and near.

The 2018 Olojo festival offered great opportunity for the Ooni of Ife, Oba Enitan Adeyeye Ogunwusi to showcase the rich culture of Ile-Ife. The festival was celebrated with pomp, pageantry as Oba Ogunwusi in his unique style dazzled the tourists who thronged the ancient town to witness the festival. Sons and daughters of Ife who attended the event pledged their loyalty to their monarch when he came out from seclusion with the Aree crown. The Oba was said to have consulted several gods and deities while in seclusion.

As the Ooni wore a special crown known as “Ade Aree” and appears before his the crowd, people started praying and circling their heads with their hands as Oba Adeyeye Ogunwusi was passing by. A traditionalist, Ogundele Awogbeni told the Nigerian Voice that people must pray when the Ooni appears wearing the crown. As Oba Ogunwusi was coming out, the route was full og people as the Oba makes his way to Oke Mogun. He was escorted by many chiefs and the drummers entertained the crowd.

According to him, “Olojo is the day that the Ooni wears the Aree crown. It is the highest in the whole world. The Aree crown is meant for the Ooni of Ife alone. No other king in Yorubaland has it. The Ooni uses it to pray for the world, for the country as well as for Ife. The festival was heralded with ‘Gbajure’, the proclamation across town that the festival will hold which was done by traditional town criers.

The Director of media and Public Affairs at the palace of Ooni in Ile-Ife, Moses Olafare told The Nigerian Voice that Oba Ogunwusi completed the 7-day seclusion on Saturday, the day of the grand finale of the Olojo festival.

People from far and near including some Nigerians in the Diaspora came to Ile-Ife to celebrate the festival with the Ooni. Tourists from different parts of the world stormed Ile-Ife to witness the colourful Olojo festival which offered an opportunity to showcase the rich culture of Ile-Ife and the Yoruba nation.

Mrs Regina Paul was one of the tourists that visited Ile-Ife from Brazil because of the Olojo festival. She expressed delight and charged the promoters of the festival to up the game and attract more tourists next year.

Another tourist, Mr Wills Ben also want the Olojo festival to be more popularized to gain attention of the international communities. He admonished the people of Ile Ife to promote their cultural heritage so that it won't go into extinction. He appealed to Yoruba race to jointly embrace the tradition of their fore bearers, repackage and export it.

A member of the Hunters Association of Nigeria was also at the Olojo festival, Chief Olusegun Olafioye, said his association carried out the must give 21-gun salute, which will relieve the heaviness of Aare crown that the monarch wore at the festival. He admonished all and sundry to cooperate with their monarchs and Chiefs to promote and preserve the culture of the Yoruba race.

According to him, "Olojo festival is the celebration of the remembrance of Ogun, god of Iron, who is believed to be the first son of Oduduwa, progenitor of the Yoruba indigenes."

While speaking, the Aare Sooko of Ife Kingdom, Chief Aratunde Arayanju lauded Ooni for promoting the culture, and urged Nigerians, especially people from Ile-Ife to imbibe the culture and support the Ooni to take the Yoruba race to higher ground.

Oba Ogunwusi kept praying for his subjects, the ile-ife, Osun state and Nigeria. He noted that the Olojo festival signified the day the world was made and that it was an indication of new beginning of positive things in Osun state. He said the festival was a commemoration of the creation of the first dusk and dawn.

Madam Fayanmi Ogundunni said the Olojo festival remains an important condition to ensure that the identity of the Yoruba race is preserved for the coming generation. Fayanmi's postulation was in line with the thought of the state Governor Mr Rauf Aregbesola who expressed the same feeling.

Aregbesola who was represented by his Special Adviser on Culture and Tourism, Mrs Taiwo Oluga, congratulated indigenes of Ile Ife for being at the vanguard of preservation of Yoruba culture. The Governor promised to continue to support cultural activities as part of efforts to foster unity and promote harmonious relationship among people of different religious beliefs.

Adorning the mystic crown, Oba Ogunwusi walked to Oke Mogun, where the monarch completed the rites of the festival. The wife of Ogun State Governor, Mrs Funsho Amosun was among the notable dignitaries that attended the festival.

While visitors to the ancient town can always see the imitation of the Aree crown in front of the palace of the Ooni after the celebration, the tourists left Ife with good impression of the cultural heritage of Ile-Ife.

*For full photo album of the festival, visit The Nigerian Voice Photo Albums* Disclaimer: "The views/contents expressed in this article are the sole responsibility of the author(s) and do not necessarily reflect those of The Nigerian Voice. The Nigerian Voice will not be responsible or liable for any inaccurate or incorrect statements contained in this article."
Articles by The Nigerian Voice
30-9-2018  Saving Lives With Boreholes In Osun Rural Communities  26-8-2017  Hadiza Bala Usman: Manning The Gateway To Africa’s Largest Economy8-8-2017  Female Genital Mutilation: Myths And Facts; Complications And Consequences.