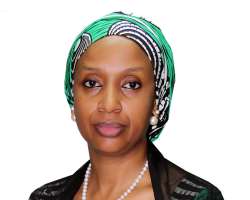 In July 2016 when President Muhammadu Buhari appointed Ms. Hadiza Bala Usman as the first female Managing Director of the Nigerian Ports Authority (NPA), not many Nigerians gave her a fighting chance to succeed at the job of manning the Gateway to the Nation’s economy.

In fact, her appointment to the position was contested on grounds that she lacked experience in maritime administration, while other pockets of opposition regarded the job as compensation for her role in the #BringBackOurGirls campaign she championed with Dr. Oby Ezekwesili.

However, one year down the line, Hadzia Bala Usman has exhibited a rare leadership character which previously eluded industry watchers.

In the short time she has spent at the helm of the NPA, Hadiza has expertly navigated the complex waters of Nigerian Ports Administration, strengthening the organisation’s processes and skilfully avoiding the banana peels that have been the undoing of many of her predecessors.

According to sources, President Muhammadu Buhari chose Hadiza to lead the NPA along the lines of transparency and accountability as he was convinced of her integrity and reputation as an anti-corruption advocate.

From her first official assignment which involved the official commissioning of a Command, Control, Communication and Intelligence System (CCCIS) for the NPA, her time in office has been marked with efforts to improve operational efficiency by enthroning International Best Practices and Standards.

In the last one year, Hadiza has focused on building synergy with sister maritime agencies, engaging with stakeholders as well as automating port processes in order to achieve a globally competitive Port system in Nigeria.

Highlights of her first year in office include meeting and surpassing NPA’s revenue projections target of NGN16 billion naira for the first quarter of 2017 as she generated NGN118 billion naira within that period.

She has also initiated partnerships with the World Bank, United Kingdom, Japan and the Ports of Miami and Dubai among others targeting improved trade relations, increase in revenue generation and developing a technical road map for the development of the Port Industry.

On the local front, Hadiza has forged mutually beneficial synergy with the Nigerian Liquefied Natural Gas Company, the Nigerian Navy, NIIT, the Infrastructure Concession Regulatory Commission (ICRC), the Council for the Regulation of Engineering in Nigeria (COREN), Nigerian Railway Corporation, as well as introducing a quarterly stakeholders’ parley and commissioning a study on port charges in West Africa.

In the area of infrastructure, the NPA recently procured four new tug boats to boost operational efficiency, while the process to connect the Lagos-Kano Standard Gauge rail System to the Lagos Port Complex has commenced.

In the area of staff welfare, Hadiza has assured NPA workers of transparency in promotion, regularization of the salary structure, training, and a robust succession plan. Furthermore, she assured NPA pensioners of monthly payment of their entitlements adding that a mechanism will be put in place to guarantee sustainable adjustments.

Worthy of note is the fact that Hadiza led Nigeria’s delegation to the 24th Assembly of the International Maritime Organisation (IMO) in London earlier this year, where Nigeria's Alternate Permanent Representative to the IMO, Mr Dikko Tahir Bala was elected as the Chairman of International Mobile Satellite organisation (IMSO).

A more recent confirmation of Hadiza’s sterling achievements in the short period came when she emerged as the Vice President, (Africa Region) of the International Association of Ports and Harbour (IAPH).

In all, the NPA MD, whom stakeholders have commended for her progressive policies and actions since taking over at Marina, has in the space of one year indicated her resolve to steer Nigeria’s ambitions in the port sector into calm waters. If there are still any doubts about her commitment to steer Nigerian port operations into calm waters, she may at the end of her tenure, put a seal on the controversial saying that “what a man can do, a woman can do even better.”

Disclaimer: "The views/contents expressed in this article are the sole responsibility of the author(s) and do not necessarily reflect those of The Nigerian Voice. The Nigerian Voice will not be responsible or liable for any inaccurate or incorrect statements contained in this article."
Articles by The Nigerian Voice
15-10-2018  How Ooni Of Ife Showcases Cultural Heritage With Olojo Festival30-9-2018  Saving Lives With Boreholes In Osun Rural Communities  8-8-2017  Female Genital Mutilation: Myths And Facts; Complications And Consequences.