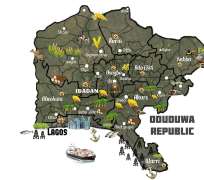 (Being a verbatim copy/transcript of a speech delivered by Chief Femi Fani-Kayode to the Alajobi Group- the group that wrote "the Yoruba Constitution"- on the occasion of the commemoration of ”June 12”, as published by The News Magazine of 2 July, 2001).

”I must commend the vision, strength of character, and the clarity of purpose of the Alajobi Group together with that of the expanded

committee on the Yoruba Constituent Assembly for coming up with this noble and innovative initiative and for drawing up this truly progressive and pristine constitution for the Yoruba people.

I salute their courage, their sense of history, their excellent timing and their obvious and deep-seated concern for the fate of the Yoruba race in the 21st Century and in a wider Nigeria. These are concerns that we all, as responsible and literate Yoruba men and women, certainly share. It is for this reason that I can therefore make the following emphatic and categorical statements on the proposed constitution.

Firstly, that I have read it carefully and that I have considered the legal and social implications of every word and every line of the document.

Secondly, not only do I fully endorse its provisions, but I also encourage every Yoruba man and woman in Nigeria (and indeed in the diaspora), not only to get hold of a copy, but also to imbue its laudable and beautiful message of self-determination, autonomy, decency, tolerance, and the restoration of the dignity and self-respect of the Yoruba people.

Again the collective objective of the proposed document is clear: It seeks to preserve and protect the culture, the heritage, the values and the sense of excellence of the Yoruba nation. It seeks to emancipate us from the shackles of unitary servitude and it seeks to give us a resounding and irresistible voice, not just over our own destiny and over our own affairs, but also a strong and respected voice in the comity of civilized nations. It seeks to reject the muffled, garbled, confused, and clearly weak echo that present-day Nigeria has bestowed upon us as a people.

Though we have never been conquered, subdued or overwhelmed by any other nation on the African continent, it is sadly clear

And of course this regrettable state of affairs is not only unnatural but it is also completely unacceptable. You cannot muffle the Yoruba and you cannot hold back their progress in the name of one Nigeria. And that is precisely why the document that the Alajobi Group has prepared is not only timely but it is also clear that the adoption of the spirit of its provisions, is vital for the future welfare, and indeed survival, of our people.

This is a duty that is incumbent on each and every one of us that are Yoruba men and women, and whether we like to admit it or not, posterity and history will judge us, kindly or unkindly, depending on which side of the divide we find ourselves in this noble quest. Today the Yoruba number at least 40 (Forty) million people in Nigeria alone.

Our strength is self-evident but till now we have refused to use it. We have a historical legacy that manifests the deepest and most profound form of liberalism, dignity and grace and we have an in-built and instinctive craving for excellence, fairness, lively debate, education and progress that is second to none.

We have a keen sense of justice and we have an overwhelming desire for decency in public and private affairs that cannot be matched anywhere else in this part of the world. We have a resilient soul, a fighting spirit and a courageous heart, qualities which our rich and noble history cannot but testify to in an eloquent and incontrovertible manner.

We have a historical lineage that is not only more enlightened, more cosmopolitan and more sophisticated than most but in addition to this it is clear to us that we have a key role to play in the restoration of the dignity of the black man worldwide. It is for all these reasons that I can proudly proclaim with every fiber of my being and every atom of my soul that, before all else, I am first and foremost a Yoruba man.

In my family, the Fani-Kayode family of south western Nigeria, we value education. We cherish it, we live by it and we are proud of it. But this is not a value that is peculiar or particular to my family alone. I am proud to say that it is a value that is intrinsic to and deeply entrenched in the very nature and culture of the Yoruba.

It is a value that is deeply entrenched in the deepest recesses of our body, spirit and soul. Our quest for excellence and distinction simply knows no bounds. And of course that is precisely why policies such as free education at all levels is something that the Yoruba people are prepared to live for and, if need be, prepared to die for.

They, perhaps more than any other, recognize the fact that education, in practical terms, is a liberating force: it frees the mind from the barren and provincial bondage of myopia and it frees the spirit from the insidious and pervasive prison of ignorance.

They, perhaps more than any other, appreciate the fact that once you are educated the sky becomes your limit. But sadly all of this is now under threat as we have been compelled by our former colonial masters to be part of an artificial, man-made and implausible entity called Nigeria, the majority of whose ethnic groups, from at least north of the River Niger, certainly do not value education as much as we do.

Not only have we been compelled to live in this artificial entity but we have also been told in clear and unequivocal terms that our brightest and our best will never be allowed to preside over the affairs of this strange and hybrid mega-nation.

And instead of anything good, they rather insist on introducing into our body politic, alien and archaic concepts and retrogressive and backward philosophies such as "political sharia" and so many other questionable contraptions that are not only barbarous and primitive in nature but also downright repugnant to what the British once described as "equity, natural Justice, and good conscience."

That is precisely why we seek to establish a system which can at least attempt to guarantee a higher degree of ”separate development” for the various nationalities and ethnic groups that have been compelled to live together in this extraordinary mega-nation of ethnic incompatibilities. This is precisely why every true Yoruba nationalist will be pleased with what the Alajobi group is doing.

For we know where we came from, we know who we are and we know where we are going. And even though the powers that be in Lord Lugard and Lord Harcourt’s Nigeria have cheated us, robbed us, killed us, brutalized us, divided us and made us simply powerless, we are still a strong and virile people. We are still a great race. (TO BE CONTINUED).