THE FIGHT AGAINST CORRUPTION AND THE GRAND SOLUTION PART 2 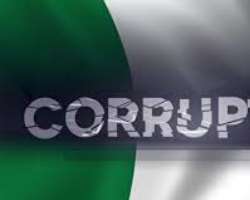 This is the continuation of the public lecture I started serializing last week.

Mismanagement of Human Resources and the Nigerian Youths

Human resources management is one of the major causes of crimes and youth violence in Nigeria. The obvious neglect of Nigerian youths (the abode of human resources) resulting to mass unemployment or mismanagement of the gift of youths as one of the greatest resources Nigeria, are the major causes of crimes and underdevelopment in the nation, and consequently the worsening rate of insecurity in the country, which causes constant violence, kidnapping and armed robbery.

Almost all the cases of electoral violence and crimes that besieged some states in the Federation since the inception of democracy in 1999 were fully executed with the youths as perpetrators. Year in year out, the unemployment crisis gets worse to the extent that today, there is no vibrant middleclass Nigerian who is conscientious enough to lead the civil society towards economic and industrial revival (This Day: Tuesday, September 18, 2007). The affluent citizens in the country find it hard to establish any employment creating investment; instead, they use their government positions to pursue their personal and group interests. The government in all ages find it difficult to undertake a national research on the best means to resolve the unemployment tragedies that beleaguered the country and thus think out in perspective planning, permanent ways out. Alvan Awuzie (Daily Sun: Wednesday, June 23, 2011) correctly captured the repercussion of this negligence when he asserted that: “In the long run, a nation that throws out over half a million graduates every year, but hardly employs one hundred thousand cannot but know that the rest have become willing tools in the hands of terrorists, kidnappers, sects and the like.”

Nigeria as a nation, in its search and assurance on national security must think out the best ways of ensuring that her youths and leaders of tomorrow are well employed, either by ensuring alternative employment schemes or by inserting such in their curricula as they pass through formal education (from the Primary to Tertiary Institutions). It is on this backdrop, coupled with the negligence or injustice in the distribution of developmental projects and democratic dividends in the places where these youths come from that caused the several cases of societal unrest as witnessed in the South-South and now in the North-East in fuller intensity. This made Oscar Onwudire to regretfully observe that: “Now we are witnessing a system failure. The uneducated youths in the North are now wiser and cannot see how their educated leaders have made their lives better. They see their leaders living well with stupendous wealth but it never trickles down. They wonder if it is just. They remember that Islam is about justice. The search for an explanation and all they can see is “Western Education must be the Cause” since almost all the perpetrators have western education. They then declare it a taboo (Haram), (Daily Sun: Wednesday, June 23, 2011).

The truth today is that unemployment is a threat to the national health of Nigeria. It is an outstanding misconduct perpetrated on a specific class of the Nigerian society. This form of human misconduct and its effects on human dignity as lived in today’s Nigerian society, lead to sundry crimes, adverse ripple effects and chains of evil. That is why Battista Mondin (1985:178) remarked that “work, in fact, eliminates three great evils of humanity: Boredom, vices, and need.” Consequently, where unemployment reigns, where due wages for workers are denied, and when human needs are not attended because of lack of monetary means for their attainment occasioned by non-payment of salaries worked for, these three evils mount greatly.

Unemployment means joblessness, and joblessness entails intentionally bestowed idleness, and as it is in the Nigerian situation, this means an outright declaration of “no work for you” to the youths. Thus, to leave Nigerian youths loiter the streets, ageing while unemployed, is to say that Nigeria has no job for its youths. One tends to ask, ‘what use is it to produce and raise children that one denies the opportunity to work, earn a living, be independent and have self-fulfilled livelihood?’It is on this note that the American Chief Justice Dickson once remarked that work is one of the most fundamental aspects of a person’s life. A person’s employment is an essential component of his or her sense of identity, self-worth and well-being. Accordingly, the conditions in which a person works are highly significant in shaping the whole compendium of psychological, emotional and physical elements of the person’s dignity and self-respect.

3. Nigeria and the Fight against Corruption

Though corruption is said to be as old as man, and that no society or country exists without any form of corruption either as a customary habit or new arrival, it is today the second nature of our country Nigeria and it is done with impunity. Prof Chinua Achebe (1983) saw all these as central to the Problem with Nigeria.

Corruption in Nigeria is ubiquitous and prevails in outrageous degrees in all nooks and crannies of the Nigerian society, private and public domains, amidst the oligarchs/plutocrats and the peasants, and in all sectors of the nation’s social existence. Corruption has eaten deep into the Nigerian bureaucracy and civil service, the political and economic sectors, the law enforcement agencies, the Nigerian Police Force, as well as the power sector, transport and education sectors, media and communication sectors, entertainment and religious sectors, the Nigerian Judiciary, Legislature, and Executive arms of government, the health and agricultural sectors, and in common daily living, etc. These make the fight against corruption an uphill task and its embarking, an impossible possibility.

Virtually all sectors of the nation’s social existence is raided by corruption, even the religious domain, although of recent Christian evangelism has become one of the highest employers of labour in Nigeria. Most unemployed Nigerian youths today, see in the act of proliferating religious sects and denominations as “business”, thus, a leap out of idleness, and as business, religious activities turn to commerce. In the Southern Part of Nigeria, the booming proliferated churches have at least 70% average aged Nigerians and youths as evangelisation business tycoons.

What Nigeria needs today, is not the emergence and appointment of politicians to head agencies, ministries, Parastatals, commissions and boards, but a thorough discernment of the person that emerges as a public officeholder, and rising up to condemn and fight whoever misappropriates the nation’s commonwealth for personal gains that are either self-aggrandisement or as a result of favouritism (cronyism, nepotism and clientelism), and irrespective of his/her provenance, pedigree and status.

With regards to the Nigerian youths and the Nigerian situation, corruption in the forms of nepotism, favouritism and influence-peddling taunting the civil service commission and bureaucracy in Nigeria, have ruined the future of the Nigerian society. This is perpetuated by public officeholders. These public misconducts show inference between the politicians and the civil servants, especially in employment opportunities, which make poverty and unemployment in Nigeria a perpetual malady. For instance, the December 2012 national immigration recruitment exercise is an apple proof. The recruitment was full of scandals, as it allegedly favoured a section of the country that were opportune to get jobs slots being secretly allocated to top government officials from their places.

This is the reason why Ogbeidi (2012) discussed ostensibly the effects and challenges of corruption in the Nigerian economy. According to him, “it is difficult to think of any social ill in the country that is not traceable to the embezzlement and misappropriation of public funds, particularly as a direct or indirect consequence of the corruption perpetrated by the callous political leadership-class since Independence. The cycle of poverty keeps growing with all its attendant consequences even as the rate of unemployment remains perpetually high. By giving mediocrity advantage over intelligence through nepotism and cronyism, intellectual capital, which is the bulwark of development and advancement, has continued to drift abroad in search of greener pasture. Paradoxically, the scourge of corruption has left the country straddling two economic worlds at the same time. To state the obvious, the country has found itself in the quagmire of a country too rich to be poor and at the same time too poor to be rich. Thus, this has made it inevitable for every Nigerian to be a victim of corruption.”

Consequently, the problem with Nigeria is enormous. Even the fight against corruption that has succeeded in other nation-states has failed in Nigeria. The reason is common and crystal clear. The Nigerian elites and leaders (especially the Executive and Legislative Arms) are corrupt and the political system and mindset of our nation abhors strong opposition. It is no hidden truth that strong opposition or competition in partyism is an important component of democracy. We operate almost a one party-state system, where opposition is considered as enemies of the State, the government and also of the masses. The result of this weak or silenced opposition is the lack of checks and balances in government and thus the reign of corruption.

For effective leadership to occur, the country must embrace a democracy that promotes not only broad participation but also meaningful competition, which can engender the dynamic opposition-activity essential for accountability. These true statements explain why it was possible for General Buhari-led Junta to deviate from the original intent of his War Against Indiscipline and instead allowed an overzealous military dictatorship to perpetrate a draconian rule. Similarly, it can be argued that the absence of a strong opposition party made it possible for General Obasanjo to succeed in manipulating anticorruption agencies against the wishes of a deserving people. Today also, opposition-strangle has led to a lopsided nature of the President Buhari’s fight against corruption in the contemporary Nigeria.

For instance, a recall of events during Obasanjo’s fight against corruption with the EFCC during the Senator Ken Nnamani-led senate, which enjoyed high level of independence from the executive arm, led to the internal party opposition that destroyed Obasanjo’s third term presidential bid and manipulations. This unusual but historic emergence of two contending forces was bolstered in the dissentions caused by the arbitrary political bias exhibited by the EFCC towards the political opponents of the president. The Senate President, Ken Nnamani, ridding on the support of the Anti-Third Term alliance of the National Assembly was able to compel EFCC to expose many corrupt office holders (particularly governors) regardless of their relationship to the President. This seemingly balance created efficient legislative oversight which was essential in checkmating executive excesses, including Obasanjo’s fanatical drive to circumvent the Constitution for tenure elongation and the activities of other regulatory agencies. The Legislature had soundly exposed the ills of the central government which, of course, heightened national outcry and desired scrutiny. Before then, both the legislature and the war against corruption program were merely propagandist echoes with imaginary accomplishments. All piloted by the executive manipulative schemes. To be continued

Disclaimer: "The views/contents expressed in this article are the sole responsibility of the author(s) and do not necessarily reflect those of The Nigerian Voice. The Nigerian Voice will not be responsible or liable for any inaccurate or incorrect statements contained in this article."
Articles by Nathan Protus Uzorma
7-8-2017  Gov. Rochas, Has Imo Government Paid You?26-6-2017  Ikwum And Ogomcracy In Imo Government9-5-2017  Religious Similarity23-1-2017    the Fight Against Corruption And The Grand Solution Part 39-1-2017  The Fight Against Corruption And The Grand SolutionMore...