Adeniji Kazeem- The Glory Of Lagos State Ministry Of Justice. 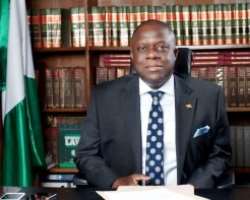 Attempts, measures and steps must be taken to separate politics from performance and the goal of the justice system of any nation or polity is always to ensure a crime free society which is undoubtedly one of the major aspects or attributes of good governance. No wonder the Lagos state ministry of justice led by the State’s Attorney General, Adeniji Kazeem, has continued to make relentless effort towards actualizing this goal ever since he was sworn into office in September 2015. It is quite obvious that although crime fighting as well as the security of the lives and property of citizens has always posed huge challenges to any government, it remains one of the main avenues of raising public confidence that the justice system is fair and will deliver for the law-abiding citizens. This is equally a key factor in rating the performance of the ministry. It is on this ground that some of the laudable achievements of the Lagos state ministry of Justice are showcased as follows:

In his commitment to ridding Lagos of recklessness and impunity on the roads, the State’s Attorney General, Kazeem Adeniji, has inaugurated five Mobile Courts which are currently in operation to facilitate prompt and immediate trial of road traffic and environmental offenders. These Courts were inaugurated in February 2016 at the Ikeja High Court premises, Lagos and are being presided over by Magistrates whereby prosecutors from the Ministry of Justice and defence lawyers from the Office of the Public Defender (OPD) are readily available to defendants who so desire.

Over 5,000 offenders who ran foul of the Lagos State traffic, environmental and street trading laws have been tried by the Mobile Court in the past nine months. More than 85 per cent of the offenders were given non-custodial sentences; some were fined and others given community service. The remaining were cautioned and allowed to go.

Offenses being tried by the Court include; driving against traffic, refusing to obey traffic signs like Zebra Crossings and Traffic Lights indications, crossing the highways where Pedestrian Bridges are provided, driving on the BRT by non-designated vehicle and parking at undesignated places, commercial buses on motion with their doors open thereby endangering lives of both their passengers and other road users, noise pollution and street trading amongst others.

There is no doubt that the reduction in the commission of these traffic offences, would determine how much Lagos had progressed as a civilised society.

Task Force to Tackle Land Grabbers
The Ministry of Justice under the Lagos State Government has set up a Task Force to check the menace of land-grabbing in the State, just as it vowed to tackle the activities of land grabbers popularly called Omo-Onile with the full deployment of resources of government and applicable law once and for all.

The Commissioner had earlier noted that Section 281 of the criminal law included land as things capable of being stolen, while Sections 52 and 53 of the law prescribe a jail term of two years for any person who forcibly enters or takes possession of land in a manner likely to cause a breach of the peace against a person entitled by law to the possession of the land.

The setting up of this task force has shown that the Justice Ministry and the State Government have indentified the effects of the problems being perpetrated by these unscrupulous elements on commercial activities and peace of the citizenry and are also out to resolve the menace completely.

This move has furthermore enhanced the protection of investors as well as maintaining law and order in the state and by implication, will encourage the verification of legal claims through litigation rather than resorting to violence as explained by the Attorney General.

Establishment of a DNA Forensic Lab in Nigeria to fight crime

In furtherance of its commitment to the criminal justice sector reforms and take the fight against crime to a greater level, the Ministry of Justice under the Lagos State Government has concluded plans to establish the Lagos State DNA Forensics Centre (LSDFC) which will take off early next year 2017. This is the first ever high-powered DNA Forensic Laboratory in Nigeria which when fully operational, would fulfill an unmet need for DNA profiling which is a unique forensic technique that is now being used all over the world.

This project is to complement the ground-breaking donation of equipment worth N4.8 billion to the Nigerian Police by the state government, and the recent solidarity visit of the Governor to crime flash points like the Irawo area of Ikorodu where criminals have been terrorizing innocent citizens, among others as further proofs of the government’s determination to tackle crime.

This Centre would also aid investigation on domestic and sexual violence cases, boost family and paternity proceedings, and help in identifying victims of natural and manmade disasters. It is expected that there will be partnership with foreign experts in the DNA field on the project to build, operate and transfer to government after about two years, a period within which the officials of the state must have been trained on how to run the Centre which is believed to go a long way in bringing about seamless administration of justice.

Revival of the Crime Data Registry
As part of the Justice Ministry’s commitment to use technology to combat criminal tendencies, the Crime Data Register (CDR) in the State has been revived. CDR is an electronic repository of information about suspects and offenders who pass through any of the prisons in Lagos State. The CDR involves the participation of Stakeholders in the criminal justice process, namely; the Lagos State Judiciary, the Lagos State Ministry of Justice, the Lagos State Command of the Nigeria Police and the Lagos State Command of the Nigeria Prison Service. Any convicted offender in the State will thus have his/her details electronically registered. This initiative is being strengthened and is believed to reveal the capabilities of this powerful tool for fighting and analyzing crime.

Amendment/Reform of laws in various institutions in the state

Since the inception of office of the Attorney General, Mr. Kazeem, the Ministry of Justice under the Lagos state government has inaugurated the Lagos State Law Reform Commission aimed at deepening democracy and the Rule of Law. The commission has the statutory mandate to facilitate the process of reviewing laws governing various institutions and government parastatals in the state with a view to making appropriate recommendations for the repeal or amendment of such laws or provisions that have become obsolete and bring them in tune with current realities and best practices. Some of the laws revisited and amended include:

Launching ofOnline access to state laws
The Ministry of Justice under the Lagos State Government has launched an online platform in conformity with modern day trends where lawyers, investors and the public can have access to all the laws of the State. The digital platform which is the first of its kind can be accessed via www.laws.lagosstate.gov.ng .

The online platform was in fulfillment of the obligation of the State Government to complement the existing hard cover copies as well as to create easy access to the State laws thereby promoting accountability and responsibility, and enabling investors to make informed decisions about their investments in the state.

This noble project is not only geared towards the effective administration of the Lagos state government to drive good governance and effective justice system in the state through innovation and information technology but also to serve as a platform for the education and enlightenment of the general public on the laws governing the state of Lagos by a simple click of a button.

Other interesting features are available on the site include the downloading and purchase of relevant sections of the law as required by online users rather than the entire laws while payment modes via MasterCard, Visa, Verve and Interswitch have all been integrated to the online platform.

Protection of Citizens Rights
Lagos State Ministry of Justice, as lawyer to the good people of Lagos, has consistently been an advocate as well as a defender of the rights of the citizens. The Ministry has departments and statutory agencies dedicated to the provision of free legal services to citizens whose rights have been breached or violated.

Furthermore, Hon Adeniji has worked harmoniously with the State Judiciary, Police Command and Prison Services towards maintaining an efficient and effective Justice system. He has equally ensured that government Ministries, Departments and Agencies enjoy good quality legal advice and representation so as to act fairly, promptly and in accordance with the Rule of Law. While promoting Human Rights and Access to Justice by offering free legal advice, representation in Court and mediation services to residents of Lagos State, especially the poor and vulnerable, Hon Kazeem has also implemented the Law and Order policy of Government by making new laws, updating old ones and assisting the enforcement agencies.

CONCLUSION
If these achievements can be recorded so far by Mr. Kazeem, then his competence and capability to deliver is unquestionable. The history of Lagos state Ministry of Justice and Lagos state at large cannot be completely told without the mention of this noble personality and leader. It is therefore right to say that better is not enough, rather, the best is yet to come in Kazeem’s performance.

Disclaimer: "The views/contents expressed in this article are the sole responsibility of the author(s) and do not necessarily reflect those of The Nigerian Voice. The Nigerian Voice will not be responsible or liable for any inaccurate or incorrect statements contained in this article."
Articles by Nonso Inekwere
1-9-2015  Ambode’s Achievements In His 100 Days In Office22-8-2015  Nobody Is After Fashola!19-8-2015  You Will Not Fail21-7-2015  Why Lagosians Should Keep Faith In Ambode6-10-2014  Ambode---a Man Whose Yes Is Yes.More...