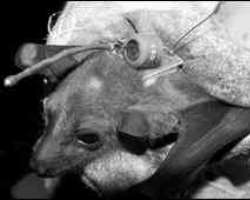 Detailed studies of the ways bats and dolphins use sound to echo-locate could soon help people with cochlear implants listen in stereo.

The research could also help robots improve how they find their way around hazardous environments.

The studies have revealed some of the tricks echo-locating animals use when catching prey.

Adapting the tricks should produce artificial systems that do a better job of locating static and moving objects.

Sound lesson
Bats and dolphins are well-known for their use of sound but relatively little is known about all the mechanisms that underlie this ability, said Professor Robert Allen from the University of Southampton who has co-ordinated the investigation into echo-location.

The research project, called Biologically Inspired Acoustic Systems (BIAS), has looked at the physiology of echo-locators, particularly bats, and how they structure the sounds they emit to help them navigate and catch prey.

Robots are needed inside nuclear reactors where humans cannot go

“Colleagues at Leeds University have produced casts of bat heads and we're able to bounce sound off them to see what happens and to try to understand how the head shape affects the echoes received at the ears,” said Professor Allen. “These are fundamental studies.”

In parallel with these laboratory studies, a small, lightweight backpack has been developed that can be strapped to adult Egyptian fruit bats to listen to the sounds they emit while flying.

It was important to be close to the origin of a signal, said Professor Allen, because some of the subtleties of emitted sounds and their echoes will be lost with a microphone that records bats as they fly past.

The recordings have revealed the complexity of the sounds that some bats emit. The creatures being studied by researchers from the University of Leeds and Stratchclyde emit pulses of sound at fixed and fluctuating frequencies and many typically last only a quarter of a millisecond.

The fixed frequency pulses seem to help work out, via doppler shift, how prey, for example, is moving relative to the bat.

The joint Leeds and Strathclyde work is looking at developing ultrasonic transducers that can be used in small robotic vehicles that can go to places that are too dangerous or small for humans to get at.

“We're currently looking to apply these methods to positioning of robotic vehicles, which are used for structural testing,” said Simon Whiteley from the centre for ultrasonic engineering at Strathclyde.

The robots might be able to use the echo-locating techniques to spot cracks in the walls of reactors or containment vessels.

Dr Whiteley and colleagues published their results in the journal Bioinspiration & Biomimetics.

Other pulses are used to help the bat focus on an object, spot very small objects and time their attack.

Chirps, sounds that start at one frequency and slide up or down to another over a short interval, help the bat spot where an insect is. The frequencies a bat uses are related to the size of its prey and the size of the bat.

The researchers also found that overlapping signals let bats spot objects that are smaller than the wavelengths of the sounds they emit. Researchers are pursuing this insight to see how it can help improve the resolution of sound-based imaging systems.

“Some bats have a very sensitive region of the cochlear around their call frequency so they can use doppler shift to get information as to whether an insect is flying towards or away from them,” said Professor Allen.

For instance, he said, the sophisticated sound signals give a bat clues about the texture of an object. Adapting this could make medical ultrasound systems more sensitive and able to pick out different tissue types beneath the skin.

Research partners are also looking at using this technique to help in probing the ground for oil or other mineral deposits. Work is now going on to bounce the signals off different types of geological materials to determine the signals they reflect.

One application being pursued is adapting the way that bats process sound to improve the location-finding abilities of hearing-impaired people with a hearing aid or a cochlear implant.

“A child with an implant knows the bus is coming but not whether it is from the left or right,” said Professor Allen.