One Year And Buratai Shines Even More 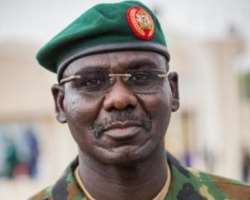 “…the General is the safeguard of the state.

If the safeguard is complete, the state is surely strong.

If the safeguard is flawed, the state is surely weak...

He looks upon the troops as his children.
Thus they can venture into deep river valleys with him.

He looks upon the troops as his beloved sons.
Thus they can die together with…” Sun Tzu, The Art of War

"We must keep the promise to our nation!
We must make a difference!" Lt. Gen. TY Buratai

It has been one year since Nigeria’s Chief of Army Staff, Lieutenant General Tukur Yusufu Buratai quoted from world renowned war treatise, the Art of War by Chinese Warrior – Sun Tzu, also General Sun Wu. As someone who had done multiple passes of the book – reading cover to cover – my expectation was that we would be saddled with a cold calculating war machine.

Forming that impression was not based on the portion of the book he quoted of course, it was based on the very fact that he quoted a book that is seen as propounding some of the most ruthless concepts ever put forward in military history. He quoted the book just the day after he was appointed.

Few weeks after this, because of the much I saw of General Buratai’s leadership as reported in the media I was compelled to research the Art of War, but my interest was not in the book but the personality of the writer. Incidentally, the Kung Fu Channel on Startimes showed a series, “Sun Wu”, which chronicled the life of the warrior author. I learned that Sun Tzu was, beyond being an accomplished general, he was equally a statesman. His intention for writing the book was not to promote wars but to minimise the need for them. He placed loyalty to the state above his own interest and he truly treated his troops as his blood as far as permissible under the cultural context in which he operated.

For General Buratai, even the culturally and socially permissible was no barrier to him bonding with the troops on the front. Not a few pessimists dismissed images of him working out with troops as cheap publicity stunt but one year down the line they were hushed when the same General broke his Ramadan fast in the trenches with the other soldiers. If he was after publicity stunt he definitely had no further need for it during the breaking of fast so it became clear that what he displayed from his first weeks in office was his true identity.

His real strength as a warrior, the kind of General Sun Tzu has in mind, was with the lightning speed with which Boko Haram terrorists were routed and territories recovered from them. This was a task that the average analyst had expected would require significant hardware donation by western powers. With the right strategy in place, it was a matter of weeks before the insurgents were forced to change tactics and the warrior in Buratai was prepared for them even ahead of when they started implementing their new mode of attacks.

The cowards that were once prancing around in armoured personnel carriers soon became vermin that were carrying out hit and run attacks on soft targets before scampering for the desert. The COAS’ quick thinking resulted in the creation of a motorcycle brigade that is able to deploy rapidly to counter the fighters wherever they are carrying out attacks.

This creative thinking would explain why troops are willing to “venture into deep river valleys with him,” and the Nigerian Army of today takes care of its own. The unit that was ambushed last week was a good example of this as the service wasted no time in deploying and mounting the operation that led to the rescue of the unit commander and some soldiers of the unit. In the past, they could have been forgotten or the incident could have been explained as another "tactical manoeuvre" but under a COAS who sees them as his ‘children’ and not just mere statistics we have seen the difference.

The troops did “venture into deep river valleys” with Buratai in the theatre of war in the northeast and the result today is that sanity has returned to where Boko Haram once held sway. The efforts of the Nigerian Army in the area is such that Borno state Governor, Kashim Shettima has now directed civil servants to immediately resume work at Mafa, Magumeri, Dikwa, Konduga, Benisheikh, Askira Uba, Kala/Balge and Kaga, Gwoza local government area councils that have been reclaimed from the Boko Haram Islamic sect.

According to the Commissioner of Local Government and Chieftaincy Affairs, Alhaji Usman Zannah, who briefed the media on behalf of the governor, noted that the directive followed the return of peace to the affected liberated communities, which are now “habitable and normal life has resumed for the last two or three months now.” That some people delay returning to the liberated places is not from lack of security of the areas but for the high level of destruction of basic structures.

When Sun Tzu talked about “safeguard of the state” it goes beyond fighting to ensure territorial and corporate integrity of a country as an entity; his approach involves sometimes refraining from fighting while exploring dialogues. Some of the contemporary security breaches in the country have been handled on this basis and President Muhammadu Buhari as Commander in Chief must have had inputs from his military aides, which included the COAS. Long term, being slow to unleash military might on some troublemakers would definitely pay off.

Something else General Buratai said on the day he made the famous Sun Tzu quote, was his declaration that “We must keep the promise to our nation. We must make a difference.” So far, he has kept to this promise and appears to be well committed to keeping it for the rest of his life. Even the tone with which he made the declaration was profound to the point of galvanising the rest of us to begin renewing our faith in the country coming from a time when there had been a total loss in nationalistic spirit among citizen.

So in one year, General Buratai, right from the day he was appointed has proven the positive difference he set out to make in commanding the Nigerian Army. He approached the task with this deliberate disposition that has resulted in the gradual actualization of his vision and the road map for a better Nigerian Army. In this period, he has remained committed to his vision for the Nigerian Army, which is "To have a professionally responsive Nigerian Army in the discharge of its constitutional roles". The vision has been the pivot around which everything he does revolves.

Agbese is an International Public Affairs Commentator and contributed this piece from the United Kingdom.