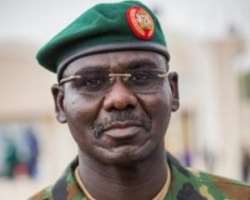 Truth cannot be suppressed forever. It frees itself from the chains of dark forces to assert itself unstoppably. It chases away the shadows of falsehood and triumph over lies and blackmail in an unrestricted outpouring of its effervescent light.

Nigeria’s Chief of Army Staff (COAS) Gen. Tukur Yusufu Buratai’s happiness must have been flavoured by this power of truth and innocence. The Code of Conduct Bureau (CCB) days back, passed a verdict that exonerated the Army Chief of any illegality in his ownership of properties in Dubai, United Arab Emirate (UAE). This was after the CCB conducted field and other verifications of declared assets of public officers.

Prior to this time, some retrogressive elements in Nigeria almost crucified Buratai for allegedly owing properties in Dubai. They obstinately and noisily claimed, he acquired the property corruptly with public funds.

His accusers vainly struggled to explain that as Director of Procurement at the Army HQ, Buratai diverted the funds meant for the procurement of vehicles and motorcycles for troops in the anti-terrorism war in Nigeria’s Northeast states.

The Army Chief’s wives, Mrs. Aishatu Tukur Buratai and Mrs. Ummul Kalsum Tukur Buratai were also dragged into the matter, as jointly owning the N120 million worth of properties in Dubai, which a reputable Dubai-based property developer, The First Group, (TFG) transacted on behalf of the family.

The anger of his detractors stemmed from the unproven conviction that the properties acquired since 2013 were paid in one full transaction. This was the only strew his antagonists erroneously held to believe it must have been proceeds of sleaze funds while in office.

But in truth, Buratai has held innumerable top command positions in his career in the Army. His accusers claim the Dubai properties were corruptly acquired in 2013, when Buratai was director of procurement at the Defence Headquarters. But records indicate that Buratai was appointed to that position on February 17, 2014. Their claim made no sense to a discerning mind, but they persisted because of their masked paymasters. It was the first lie they blatantly refused to acknowledge. It simply didn’t rhyme.

But displaying a frankness alien to Nigeria’s public office holder of his caliber, Buratai shocked and disarmed his accusers by admitting ownership of the Dubai property. He also disclosed that the family paid instalmentally for the property spanning a number of years.

The COAS was clear that money for the purchase of the properties were his personal savings for years. Another marked departure from the norm of high profile public office holders in Nigeria, Buratai has also been including the Dubai properties in his assets declaration form with the CCB upon its acquisition, which predates his appointment as Director of Procurement, Defence Headquarters and later, COAS.

In addition, TFG firm confirmed a clean and legal transaction with Buratai, indicating compliance with the extant laws of Nigeria and UAE.

In a succinct statement in Abuja, the estate agent averred that, “The First Group’s Nigerian agent, TFG Real Estate, Limited, fully abides by Nigeria’s anti-money laundering regulations. In line with this commitment, TFG Real Estate, Limited regularly files the required reports with the section of the Special Control Unit on Money Laundering (SCUML) division of the EFCC in Abuja.”

These explanations still failed to assuage the feeling of detractors bent on crucifying him. But even an Abuja based legal practitioner and human rights activist, Ugochuk­wu Osuagwu dismissed the allegations as diver­sionary. He was hurt that some Nigerians adjudged Buratai guilty even before investigation based on the bandwagon mentality of celebrating collective sensation.

There were series of proven denials of any impropriety on the Buratai Dubai property saga. But the detractors never gave it a thought. The Nigerian Army HQ did not only accept Buratai’s ownership of the two properties in Dubai, but also explained in floating details how they were lawfully acquired with legitimate earnings.

The Acting Director, Army Public Relations, Sani Usman stated; “It is a fact that the Buratai family have two properties in Dubai that were paid for instalmentally through personal savings three years ago. This, along with other personal assets, have consistently been declared by General Buratai in his Assets Declaration Form as Commander Multinational Joint Task Force and as Chief of Army Staff.”

These efforts at clarity never sufficiently interrogated the campaigners and agents of distraction or blackmail. They doubted Buratai’s claim of declaring the Dubai assets with the CCB. Rather, they upped the campaign against his person and integrity voicing his removal and accusing President Muhammedu Buhari of shielding corrupt appointees.

Fresh activism groups emerged, sponsored petitioners sprouted, even within the army and idle Nigerians suddenly became busy, with loud calls for his sack, resignation and prosecution by the anti-graft agency, the EFCC.

But they could not bury the truth for long or use it to perpetually haunt an innocent soul. Truth has now resurrected to affirm Buratai’s incorruptibility, honesty and unblemished records; a rarity with Nigeria’s high profile personalities.

Just days’ back, the CCB, chairman, Mr. Sam Saba, listed Buratai, as one of the few public officers in Nigeria who have responsibly declared their assets, with no “issues” with their assets declaration requirements. The Army Chief received this dignified commendation alongside other Nigerians, who from the outset believed in President Buhari’s preachments on corruption and adherence to the new character code of “change” in moral and ethical dispositions.

Interestingly, many other high profile public office holders including Ministers of the Federal Republic of Nigeria, Service Chiefs and other top Public Officers have issues with the CCB over the assets declaration. But Buratai was not in this clan. He passed the test and his persecutors would now have to reluctantly look elsewhere to exercise their instincts of destruction.

No doubt, Gen. Buratai remains a hero for Nigerians who are genuinely inspired by the noble service of other compatriots for their fatherland. The unwarranted assaults on his person and family, is the usual mudslinging some deviants practice as a trade in accordance with the dictates of their paymasters.

Nevertheless, Buratai should be consoled that a true messiah suffers his fate, in the hands of the same people he has devoted his life and energy to salvage.

Jesus Christ bore this burden when he came to liberate a sinful man from the clutches of the devil. And in spite of his innocence divine mission, He suffered persecution in the court of Pontius Pilate. But today the whole world adores and worships His enduring anointment as a Messiah for his resolute spirit that has saved mankind.

While not necessarily likening him with Jesus Christ, its undeniable that Buratai’s travails share some semblance with the narrative of Christ. Buratai confronted and defeated some beasts garbed as Boko Haram terrorists who held the country to ransom for years. But instead of appreciation, the same people who are now savoring the fruits of his selfless service sharpened arsenals to wickedly pierce his integrity and reputation built over the years, with diversionary accusations about his ownership of properties in Dubai.

That his own constituency, the army was fooled into the game by writing petitions against him is painful enough. Like Jesus Christ was betrayed by one of his disciples, Judas Iscariot, the few soldier-petitioners also betrayed Buratai, but the bulk of the Nigerian Army stand solidly behind him to see to a final annihilation of terrorism in the country. He should therefore not falter at his betrayal, but see his natural exoneration as his special protection by God Almighty to serve his people better.

With the emerging incontrovertible truth about his Dubai properties, Nigerians, particularly, those who orchestrated this campaign of calumny against the Army Chief and his family, should not only retract from their odd ways, but also tender unreserved apologies to the family. To err is human. But to realize your guilt or mistakes and confess is Godly. It has the power to re-invent and cleanse your soul.

But surely, after darkness comes light. As Buratai’s innocence re-echoes at dawn, it should be a soothing balm to all those similarly persecuted.

Agbese is a public affairs analyst and contributed this piece from the United Kingdom.

Disclaimer: "The views/contents expressed in this article are the sole responsibility of the author(s) and do not necessarily reflect those of The Nigerian Voice. The Nigerian Voice will not be responsible or liable for any inaccurate or incorrect statements contained in this article."
Articles by Philip Agbese
22-6-2017  Nigeria’s Naseni As Gateway To Credible Polls In Africa 23-11-2016  Where Are The Various Power Probe Report?7-11-2016  Nigerian Army And Its Deliberate Persecution24-10-2016  Who Wants Boko Haram Terrorists Back?31-8-2016  Yes, President Buhari Is Still The 'change'!More...