Abia Governorship Crisis And The Proliferation Of Certificates Of Return 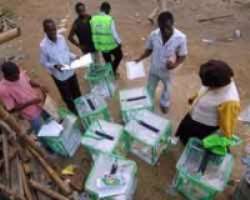 Since the Independent National Electoral Commission, INEC issued the controversial Certificate of Return to Uche Ogah, the document has become an object of ridicule. Every now and then, people , especially on the social media, are flaunting one manner of certificate or the other and lay claims to the governorship position of the state.

The situation is indeed ridiculous and depicts the deplorable level at which our coveted political offices have been ridiculed by the actions of institutions vested with the mandate of strengthening and protecting our democracy.

Last week Uche Ogah's certificate of return came under serious scrutiny in the public court .The validity of the document was questioned on various grounds. One is the date of election and the second is that the document does not bear the Nigerian Coat of Arm, a national identity and symbol which arguably authenticates every government document.

The Peoples Democratic Party, PDP, Abia State was the first to fire the salvo .The party roundly condemned the judgment of Justice Okon Abang of the Federal High Court, Abuja, which purported to have sacked Governor Okezie Ikpeazu and formed the basis of this fresh tension in Abia, as perverse and grossly unjust, adding that their position was incontrovertibly informed by their knowledge of the fact that Governor Ikpeazu was a public servant who paid his taxes appropriately under the Pay As You Earn (PAYE) system.

The party also berated the haste with which the Independent National Electoral Commission (INEC) issued a Certificate of return to Mr. Ogah, without giving Governor Ikpeazu the benefit of the judicial windows available to him, irrespective of the pendency of his appeal in the Court of Appeal. It described INEC's action as condemnable, obnoxious and holistically unacceptable; stressing that the Party, hereby, recollects that the Governorship election of 2015 in Abia State came in two phases, that of April 11 which was declared inconclusive by the Electoral body and that of April 25 which conclusively declared and confirmed Okezie Ikpeazu as the Governor-elect of Abia State.

To the best of my knowledge, since the argument questioning the validity of Ogah's certificate of return erupted, the issuing authority has not offered any explanations to clarify the issues raised. The only known position was the one by one of Ogah's hireling on the social media who alleged the the commission has threatened to institute legal action against any individual or media outfit questioning the validity of the document.

I want to strongly believe that the position of the non- commissioned and self- styled INEC spokesperson does not represent the position of the commission rather that of his pay master, Uche Ogah. My belief is enforced by the fact that INEC as a responsible institution could not issue such threat considering the fact that our legal instruments guarantee citizens the "right to freedom of expression" and also the right to demand information from government institutions. INEC's clarification on this issue is critical and highly demanded to halt further speculations and erase negative impressions already established.

Ogah's certificate of return validity argument was a comic relief to Abians who were soaked by tension occasioned by the desperate dispositions of some anti- democratic forces to truncate the mandate of Governor Okezie Ikpeazu. Creative artists deploy comic relief in the works of art to relief their audience of tension. Indeed, Ogah's certificate of return validity argument was indeed comic and could be considered preliminary.

The main relief came with the pronouncement of Court of Appeal sitting in Abuja which said that the Abia State Governor, Dr Okezie Ikpeazu should retain his seat as governor of the state pending the time the court will hear his appeal challenging the judgment of a Federal High Court which removed him from office.

Political observers are earnestly waiting the commencement of the fireworks at the Court of Appeal where the five grounds of appeal by the Abia State Governor would be looked at .The governor said that the Federal High Court lacked the power to order him to vacate the seat of Abia State Governor. The notice of appeal reads: "The trial judge erred in law when he ordered as a consequential order that the appellant vacates his office as the Governor of Abia state immediately when there was no jurisdiction in the Federal High Court to remove, vacate the occupier of the office of the governor of a state or order the removal of such officer after the unsuccessful challenge of the result of the election at the Tribunal and swearing in of the appellant as the governor."

The governor said that the only power, authority and order exercisable by the Federal High Court was to disqualify the candidate from contesting the election based on section 31(6) of the Electoral Act 2010.

I He also faulted the judge when he held that he did not pay his tax for the years 2011, 2012 and 2013, at when due, when he was a public officer whose tax deduction was under Pay As You Earn (PAYE) scheme where tax deductions were from the source of his monthly salary by the tax authorities who issued all the tax receipts and certificates.

Ikpeazu said that the Abia State Board of Internal Revenue Services that issued him with the tax certificates had not declared the certificates forged and that the trial court did not invite the issuing authorities to give evidence in the course of the trial.

According to the appeal, the plaintiff, Dr Samson Udechukwu Ogah was not a staff of the Abia Board of Internal Revenue and did not any staff of the board to testify that the tax certificates were forged.

The governor accused the trial judge, Justice Okon Abang of violating his right to fair hearing by embarking on judicial investigation without giving him (Ikepazu) the opportunity to address the court on the issue, adding : "The learned trial judge erred in law when he held that the appellant presented false information to the Independent National Electoral Commission by his ingenous meticulous study and investigation of documents filed in courts in the recess of his chambers and thereby violated the right of the appellant to fair hearing."

He said that the judge had no duty to investigate the contents of documents dumped on the court in the recess of his chambers with a view to finding for the plaintiff, stressing that" the decision of the judge which arose from the judicial investigation without opportunity to the appellant violated the appellant's right to fair hearing".

The conduct of Abians in the face of these undue provocations is commendable. It attests to the fact that Abians are peace- loving . The people who deserve greater commendation are the people of Ukwa- Ngwa ethnic- nationality. They have not had a shot at the governorship position of the state since its creation in1991. This is despite their numerical strength. The divide has nine out of the 17 local government areas in the state. Also, the "Abia Charter of Equity", a document guiding the distribution of the governorship position among the divides in the state came on stream at the commencement of this democratic dispensation in 1999 should be respected.

While Ukwa- Ngwa people are highly commended, we should not fail to remind our over- ambitious politicians that there is an extent to which human patience can be stretched. it is also pertinent to admonish them to pursue their political ambition within the limits of decency as Wolsey admonishes Cromwell in William Shakespeare" Henry VIII thus"Cromwell, I charge thee, fling away ambition:By that sin fell the angels; how can man, then, The image of his Maker, hope to win by it?"

Ambitions that ahve the capacity of stoking fire of disunity, violence, among others, are not worthy to be pursued.