Agatu: Nigeria's Fulani Have Become A Law unto Themselves 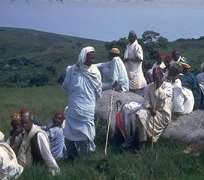 The first justification for the barbaric massacre of hundreds of Agatu people given by Fulani leaders was that the Agatu had killed 10,000 of their cows.

The latest justification for the genocide-in-progress agains the Agatu was given as presented in PremiumTimes , by a certain Saleh Bayeri, "the Interim National Secretary of Gan Allah Fulani Association," as a "retaliation" for the Agatu having allegedly killed a certain Ardo Madaki in 2013.

The Fulani believe they now have the power and legitimacy to revenge, perhaps under an administration they believe will not punish them;

and the second point to take away from these "justifications" is that the Fulani herdsmen openly believe in the barbaric " Genocidal Thinking " reasoning that any life of a clan can be taken to avenge the death by suspected other members of that clan or ethnic group.

There is a serious problem in Nigeria. The indifferent response of the Buhari government to the Fulani rising above the State and constituting a State-within-the-State, taking the law into their own hands in such deadly fashion, is scary to say the least.

Why do the Fulani in Benue State suddenly think they are the almighty authority of Nigeria?

Are they not afraid that similar thinking barbarians like them in other parts may perpetuate the same evil against members of their fold in areas where they are of minority numbers?

No one should for a minute be tolerated to act above the law. I am saying this even though I have a good amount of Fulani blood running through my veins .

Quran 4:135 says what means: "O ye who believe! stand out firmly for justice, as witnesses to Allah, even as against yourselves, or your parents, or your kin, and whether it be (against) rich or poor: for Allah can best protect both. Follow not the lusts (of your hearts), lest ye swerve, and if ye distort (justice) or decline to do justice, verily Allah is well-acquainted with all that ye do."

And the Bible says: Leviticus 19:15 ESV “You shall do no injustice in court. You shall not be partial to the poor or defer to the great, but in righteousness shall you judge your neighbor."

The issue at hand is the lukewarm and permissive posture of the Nigerian police under Arase, Army under T.Y. Buratai and government under Buhari. The Nigerian government is promoting terror in the nation by thus far failing to act and act promptly to arrest everyone implicated in this barbarism and above-the-law insanity, killing farmers and wiping out the indigenous population.

Locals and State representatives of Benue have complained that the Nigerian Security department deployed are not making any arrests and continue to watch the killers take over the communities. This is beyond comprehension. The Police even invited toe killers to table and refrained from arresting any one of them! How absurd.

Even Saleh Bayeri, the Interim National Secretary of Gan Allah Fulani Association must be arrested immediately for defending such deadly lawlessness and the massacre of populations under the brazen "justification" that the Fulani herdsmen now have the authority to be judge, jury and executioner.

What happened to Buhari stating that he can not allow a people be a "disturbance," and in his words, "how can any group create a State-within-a-State?" The same government that massacred hundreds of Zarians for erecting road blocks in fear of impending massacre and protesting of the killing of their members by the same army a year earlier, and killed unarmed pro-Biafrans for protesting and praying, is now watching the Fulani-Boko Haram herdsmen operate not just a State but a fully militarized and genocidal State in Nigeria's Benue State?

We call on the Arase to arrest and sentence in Capital proportions, all herdsmen or farmers who have taken lives in this disgraceful episode of terror. It is time Nigeria's government decides to live up to its responsibilities and stop terror and the evil activities of citizens and officers including top Security level, that incite and fuel an unending cycle of terror and lead to Nigeria remaining the most terrorized nation in the world.