By Benjamin .A. Atu 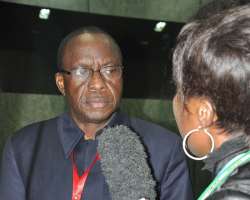 Frank Rooney says “Immortality is to keep others moving, when you have stopped moving.’ Known as the Oracle of development, Barrister Francis Asekhame Alimikhena is a many facet personality whose life has inspired many generation of the Edo people. This heroic personality achieved his name and fame through hard work and exceptional qualities that stand him out. He has battled against all odds to reached the pinnacle of success by his courage, determination and perseverance. His life has inspired a whole generation of afemai land and continues to inspire millions of Edo and others around the world. Alimikhena was one of the earliest entrepreneurs of the defunct mid western region who made it big by hard work. He worked tirelessly to put his small Igiode village in the World Map. As a refuge for the oppressed and the less fortunate, he do not share the same view with politicians who view politics as an inheritance and personal enrichment. In today’s politics where everyone is compromising, and selling his principles; the Edo North Senator elect has remain consistent with his guiding principles of life. He is proficient in inspiring and gaining the influence of his people by his contribution to society. Due to his unwavering support and development of Edo North without occupying any political office, Alimikhena became the ideal personality for the people of Edo North.

Alimikhena in his eventful early life draws his philosophy of life from the seven point creed given to Coach John Wooden by his father, the most admired coach of the university of California which says ‘Be true to yourself. Help others. Make each day your best. Drink deeply from books, particularly the Bible. Make friendship a fine art. Build a shelter against a rainy day by saving and lastly pray for guidance and give thanks to the almighty God for your blessing. The effect of these simple but incisive words is the underpinning pillars upon which the Edo North Senate elect draws his multiple inspirations. In the past years, Alimikhena has constituted himself as a one man liberation army driven by passion to reposition the community where he emanate. He was a quick learner and shouldered many community responsibilities. Alimikhena is viewed as messiah of the very poor and the downtrodden in Etsako. His philanthropy and social ideals manifested themselves in the building of igiode primary school in his village to provide access to functional education. With the consciousness that health is wealth, Barrister Francis Alimikhena in more than twenty years ago, built and equip a functional health center in igiode. Based on the high level of cholera and the spread of water bond diseases, Alimikhena many years ago provided functional boreholes that is still the major source of water supply in Igiode, Agenebode in Etsako East local government area of Edo State till today. The Catholic holy family church in Igiode which is today the biggest parish in the area with multiple story buildings as the bishop quarters were all the handiwork of this dazzling personality who is today the Edo North Senator Elect. In the past years, Igiode Community was cut off from Major towns and cities due to bad road network and electricity. Today, the story is not the same again. Without occupying any political office, Allimkhena has done all these and supply transformers to various communities across Edo North in order to make life conducive for the common man in the street.

It was therefore not surprising when all his rallies and political campaigned for the Edo North Senatorial seat always seems like a carnival. His interest and venture into politics were viewed as a divine intervention to transform lives and change destinies. The place upon himself the responsibilities of offering scholarship to Student irrespective of tribe and tongue. He derive his greatest joy and fulfillment by helping others to succeed. Many student would not have graduated while others would not have seen the four walls of a university if not for this former military officer. Alimikhena constantly turn on the passionate affection of his audience whenever he speak. He don’t deceive voters with vain words. He is not a politician who preach what he cannot spearhead. This was why after the announcement of his Senatorial victory, he echo out his vows and said “I shall neither wave nor depart from my electoral vows and promises. I will never play pranks with the suffering masses of my people‘. He is a strong advocate for rapid development. For more than thirty years ago, the Edo North senator elect has been known as the oracle of development. Today like never before, the Edo North people can go to sleep knowing the worth of their elected representative at the senate.

Due to all these towering attribute and influence, he was given a respected traditional tittle as the OKHASO of wappa Wanno Kingdom. Barrister Francis Alimikhena is easily attracted to industrious people because himself is a workerholic. He don’t like fools, Fraudulent or Sluggish people. He hath all forms of dishonesty and cowardice. In honoring him, various traditional, social educational, and religious institutions has come out openly to present several awards too numerous to mention in recognition of his grace of bearing a burden that was difficult for a government to bear. His sterling qualities have inspired many people in this generation as a hard working, God fearing, dedicated philanthropist, a role model, an achiever and motivator. By his strength of character, indomitable aptitude and spirit of hardwork as well as social ideals, Francis Alimikhena single handedly transform and obscure igiode village into what it is today.

As the loses leak their wound and winners strategies for the challenges ahead, the major factors that sharpen the just concluded election in Edo State is the achievement and contribution of the individual personality. The political party factor also play a major role in the just concluded elections. It was the PDP administration in Edo State versus the achievement of the All Progressive Congress in the six years of reign in the State. Meanwhile Political gladiators in Edo State including PDP chieftain believe that before the coming of the Oshiomhole’s administration, Edo state was in ruins. Though oil revenue was high, the greater part of whatever accrued from the oil revenue usually found its way into the pocket of those elected by the people. It never matter to the PDP administration whether the people they were representing was suffering or not. These were salient issues that sharpen the March 28th election in Edo State. This is the first State in Nigeria where the hard work of a sitting governor is became an embarrassment to other political party.

Nigeria democracy has come of age, where the strong must learn to lift up the weak rather than trampling on them like it was during the immigration employment saga. Today in Nigeria, political party campaign by both performance and personality. It is the party that provide the platform but the worth of the personality will determine the victory. Before his sojourn into politics where he first contested the senatorial seat in 2007 and 2011 respectively, Alimikhena have already shown his people that he have the X-factor to take over leadership of Edo North and provide for them, effective and efficient representations. Before now, the senator elect has always shown commitment in putting the senatorial district on the track of development to catch up with the rest of the world in infrastructural development, science, democracy and social order. This was the future saw by J. Jackson when he said ‘ In Politic an organized minority is a political majority. Nigeria unenviable status of development is due to the recycled of leaders who has fail us in the past. The growing glamour for shift in leadership and change in leadership finally came with with the most influential agent of change Francis Alimikhena.

A law graduate from the University of Buckingham United Kingdom. He was also called to the Nigeria Bar as the Solicitor and Advocator of the Supreme Court of Nigeria. Senator Francis Alimikhena, a man of multiple genius has attained immortality as a conservative statesman. This brailliant senator is the most dazzling personality that his community ( Igiode), Etsako and Edo North has produced. The early life of Major Francis Asekhame Alimikhena draws attention due the exceptional characteristics that surround his up bringing. He was brought up under a strong Christian principle. These principle formed the bedrock upon which his life stood today. He joined the Nigerian Army as a Commissioned Officer in 1972 and retired as a Major in the year 2000. Today his victory has drawn the attention of the whole nation as the most Unique victory in the political history of the All Progressive Congress (APC). Alimikhena is the only elected APC Senator in the entire South South and South Eastern part of Nigeria. His victory would not have been historic as this: if he had won the 2007 and 2011 election when he was defeated. Disclaimer: "The views/contents expressed in this article are the sole responsibility of the author(s) and do not necessarily reflect those of The Nigerian Voice. The Nigerian Voice will not be responsible or liable for any inaccurate or incorrect statements contained in this article."
Articles by Benjamin .A. Atu
31-5-2015  Buhari Will Pull Nigeria From Decay---- Alimikhena