Buhari Or Jonathan: The Time To Decide 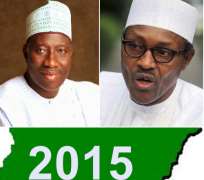 Major General Muhammadu Buhari has emerged as the APC flagbearer for the 2015 Presidential election and President Goodluck Jonathan has emerged for the PDP. The battle for the soul and future of our nation now begins.

One may have been prepared to accept the general's words as being those of a genuinely concerned and committed patriot who simply wanted our President and his Government to do a better job and who was worried about the unfolding situation in our country if he had not consistently exposed his true colors and his obvious soft spot for Boko Haram.

Permit me to share just one example of the expression of that soft spot in this contribution. On 3rd June 2013, Thisday Newspaper led their newspaper with the following headline: ''The military offensive against Boko Haram is anti-north- General Muhammadu Buhari''.

The headline was followed by these words: ''Maj. Gen. Muhammadu Buhari, has criticised the declaration of state of emergency in Adamawa, Borno and Yobe States and the subsequent military offensive against the Boko Haram Islamic sect. Buhari, who featured on the “Guest of the Week,” a Hausa programme of the Kaduna-based Liberty Radio, yesterday said the federal government's action was a gross injustice against the north. According to him, unlike the special treatment the federal government gave to the Niger Delta militants, the Boko Haram members were being killed and their houses demolished. He said he was not in support of the declaration of state of emergency in the three north-eastern states because President Goodluck Jonathan had failed from the outset in addressing the security situation in the country''.

The implications of these shameful and indefensible comments, coming from a former Head of State, are obvious and self-evident. If the truth be told Buhari's peculiar affinity with the terrorists and his fawning about their safety and welfare is as unbearable as it is nauseating.

Yet that same General Buhari who said these unacceptable things one year ago is now busy pontificating about his concerns for our nation. Many would argue that that is pretty rich coming from him given his past comments about a ruthless group of terrorists who, more than any other, merit the award for the greatest ''troublers of our nation''. Given this I regard Buhari's comments to the Nation Newspaper on the 22 July 2014 as nothing but self-serving and belated clap trap and balderdash.

Yet this clap trap and balderdash is worthy of a little attention. Of particular interest to me were the following words: ''never before have I seen a Nigerian President declare war on his own country as we are seeing now''. Really? Correct me if I am wrong but I thought that the war that President Goodluck Jonathan had declared was against terrorism and Boko Haram and not against the Nigerian people.

Does he honestly believe that Boko Haram is representative of the thinking of our people or even the majority of the people in the muslim north? Has this man not lost touch with reality? Does he really belong to the 21st century or is he nothing more than an old relic from the distant past who secretly craves for a return to the norms, ways and values of 6th century Saudi Arabia? Is such a man really fit to be President of our country?

Is he still insisting on having another muslim as his running mate in order to establish his strange dream of a muslim/muslim President and Vice President for our country or has he shelved that idea due to political pressure from President Olusegun Obasanjo, public resentment and bitter outrage?

Has he beat a tactical retreat from the muslim/muslim adventure and finally opted for Governor Olagunsoye Oyinlola, Professor Yemi Osibajo, Governor Kayode Fayemi or some other yoruba christian to be his running mate as my sources are suggesting?

I must confess that all three of these individuals are profoundly good men and are eminently qualified for the job but does this latest concession come from the heart or is it just a ruse and an attempt to appease the christian community? Is it an attempt to lure them in and make them drop their guard? Does Buhari have any respect for Christians?

Does he have any empathy with the christian community in northern Nigeria for the immense suffering, degradation, humiliation,contempt, shame, indignity, persecution and mass murder that they have been subjected to in the north for the last 54 years and particularly in the last few years?

Does Buhari understand the meaning of the words ''secular state'' or the concept of the secularity of the state? Can he possibly accept the virtues and comprehend the wisdom of such an equitable and reasonable constitutional arrangement which guarantees the rights of all faiths and which does not allow one faith to laud it over another anywhere in our country?

Does he recognise the fact that Nigeria is in actual fact a secular state in which the rights and dignity of the members of every faith, including the christian faith, are guaranteed by the constitution? Does he accept the fact that in this day and age it is a heinous crime against humanity and particularly the girl-child and that it is a complete violation of the laws of our land for little girls of the age of 5, 6, 9 13 and even up to 16 to be married off and subjected to rape in the name of religion and marriage?

Does the General support paedophiles, sexual predators, sociopaths, sadistic perverts and the criminally-insane like the Boko Haram leader Abubakar Shekau who are sexually attracted to innocent and defenceless little girls and who believe that they can be ''sold in the market'' and ''forced into marriage and slavery?'' Does he honestly believe that Boko Haram are human beings? Does this man that wants to be President of our country not recognise a heartless and callous beast when he sees one?

Does the wanton and relentless shedding of rivers of innocent blood, including the blood of children, not move his heart? Does the open abduction of almost 300 little girls, each of whom is young enough to be his grandaughter, from the sanctity of their school dormitory in the dead of the night not evoke pity in him and not stir him to rage?

Does he have any compassion and does he feel no pain for the suffering of the victims of Boko Haram? Does he know that Boko Haram has killed as many muslims as they have christians in their insane attempt to establish an islamic fundamentalist state in our country?

Is his inability to make a distinction between Boko Haram and the Nigerian people informed by the fact that he is a closet Haramite whose stated desire is to ''spread sharia throughout the whole of the country'' as he said in 2001? Does Buhari still believe that ''muslims should only vote for muslims'' or ''for those that will protect their interest'' as he said in 2001?

Does he still believe that ''christians should not worry when muslims chop off their own arms and hands in the name of sharia because it is none of their business'' as he said in 2001? Does he still believe that Boko Haram members should be forgiven, granted amnesty, pampered, sent abroad to learn and given monthly allowances ''like the Niger Delta militants'' as he suggested in 2013?

Does he still believe that , if he is not elected as President in 2015, ''the dog and the baboon shall both be soaked in blood''?

The questions are legion. Given his views about Boko Haram does General Muhammadu Buhari have the moral right to condemn anyone, least of all the President and the Federal Government, for the challenges that we are facing in this country?

Never before have I seen a former Nigerian Head of State openly express sympathy and covertly support a murderous and bestial terrorist organisation that has killed well over 30,000 innocent Nigerians in cold blood, that has abducted and raped our little girls and that has slit the throats and drained the blood of our young boys.

Never before have I seen a former Nigerian Head of State openly defend a bunch of cowardly, uncouth and barbaric jihadists that have bombed and burnt alive the weak, the vulnerable and the elderly in our country and that have slaughtered our soldiers, policemen and intelligence agents at will and with such callousness and glee.

Never before have I seen a former Nigerian Head of State openly canvass restraint and mercy for a bunch of bloodthirsty, cold-blooded mass murderers and criminals that have turned our country into a pariah nation, that has made the north the home of the most callous, ruthless, hateful, vile and evil terrorist organisation in the world and that has transformed our nation into a horrendous haven for ruthless islamic fundamentalists and bloodthirsty islamist militias.

If the truth must be told the only thing that is worse than Boko Haram are those in the Nigerian political class that secretly support and covertly assist them. A Buhari Presidency would be a disaster for our country, a danger to the Christian community and clear evidence of the final victory and triumph of Boko Haram and the jihadists over the Nigerian state. It would also represent the end of Nigeria as one nation.