What Nyako's Impeachment Portends For Democracy And 2015 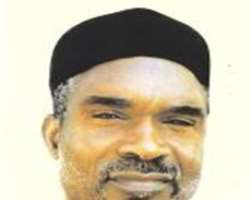 Last month I wrote an article titled 'Between terrorism and Genocide' where I chastised the now erstwhile Executive governor of Adamawa State, Vice Admiral Murtala Hamman-Yero Nyako (rtd), GCON, CFR for his controversial memo to the 19 northern states governors where he accused President Goodluck Jonathan and the federal government of carrying out genocide against the people of the north.

Subsequent to his statement, the Adamawa House of Assembly issued a 20-count allegation, 16 of which were sustained by the panel constituted by the Chief Judge. Much has been written in the last week about impeachments since 2006, with a chronicle of the victims and victors in the various impeachment sagas.

My aim here is to look at what this means for democracy and 2015. Adamawa is the state of the former Vice President, Atiku Abubakar (now in APC) and the immediate past National Chairman of the ruling People's Democratic Party (PDP), Alhaji Bamanga Tukur. Furthermore, it is one of the states in the North east under emergency rule because of Boko Haram terrorists. The other two are Yobe and Borno.

Before the House of Assembly could vote on the impeachment, the deputy governor resigned. Notice a unique situation here. Governor Nyako could have appointed a new deputy governor because there were a few hours between the resignation of his deputy and his own impeachment.

Specifically, Section 191 (3) of the constitution states that 'Where the office of the Deputy Governor becomes vacant - (a) by reason of death, resignation, impeachment, permanent incapacity or removal in accordance with section 188 or 189 of this Constitution; (b) by his assumption of the office of Governor of a State in accordance with subsection (1) of this section; or (c) for any other reason, the Governor shall nominate and with the approval of the House of Assembly of the State, appoint a new Deputy Governor.'

Anyway, that did not happen as even the governor had seen the handwriting on the wall and vacated government house a day before his impeachment. Now the Speaker of the Adamawa House of Assembly should be sworn in as the acting governor. Are we going to have a special election (by-election), with a short time remaining before the February 28, 2015 governorship election?

Whether or not you agreed with Gov. Nyako's' genocide statement, if you are a friend of democracy, you must be concerned. There are at least three key issues that must be looked at in this Nyako Quagmire or political debacle:

First, was the impeachment politically motivated? The answer will be a clear affirmative. Some of the allegations against Governor Nyako were there before he decamped from the ruling Peoples' Democratic Party (PDP) to the opposition All Progressives Party (APC). Even a fellow analyst and PDP stalwart in the state stated last week how he and his supporters tried to get national attention on the allegations against Nyako, but were not given an audience.

He was unequivocal in agreeing that now that the PDP umbrella did not cover Nyako anymore, he was now vulnerable to the torrential downpour of his enemies who had been waiting all along to witness his downfall. In fact, even the speed of the proceedings leaves little to be desired. There is a famous US court case that coined the phrase 'all deliberate speed' which is appropriate here. At least no one was kidnapped to a hotel or bribed (even though there were allegations to that effect).

Secondly, was due process followed? A look at the constitution will tell us that he was not denied procedural or substantive due process. My lawyer colleagues will understand what I mean, but in laymen's terms it means the law was followed and his constitutional rights were not trampled on. Sections 188 and 189 of the constitution deal with removal of Governors and their deputies. Only Section 188 was applied in this case. The section states in pertinent part that, '(1) The Governor or Deputy Governor of a state may be removed from office in accordance with the provisions of this section.

(5) Within seven days of the passing of a motion under the foregoing provisions of this section, the Chief judge of the State shall at the request of the speaker of the House of Assembly, appoint a Panel of seven persons who in his opinion are of unquestionable integrity, not being members of any public service, legislative house or political party, to investigate the allegation as provided in this section.

(6) The holder of an office whose conduct is being investigated under this section shall have the right to defend himself in person or be represented before the panel by a legal practitioner of his own choice.

(7) A Panel appointed under this section shall - (a) have such powers and exercise its functions in accordance with such procedure as may be prescribed by the House of Assembly; and (b) within three months of its appointment, report its findings to the House of Assembly.

(8) Where the Panel reports to the House of Assembly that the allegation has not been proved, no further proceedings shall be taken in respect of the matter.

Whatever the gross misconduct is assumed to have been proven because subsection 11 defines "gross misconduct' as 'a grave violation or breach of the provisions of this Constitution or a misconduct of such nature as amounts in the opinion in the House of Assembly to gross misconduct.'

Thirdly, the immunity from prosecution that governors enjoy should it be retained? This was an issue before the national confab and I believe their position was that it should be removed. The only problem with removing the immunity is that they will become easy prey for their detractor, who may be very powerful and connected with the anti-graft agencies.

No governor has ever resigned even though Nyako's deputy has just shown that sometimes it is better to resign than face the humiliation of impeachment, especially when the impeachment is essentially a fait accompli, making the resignation a pseudo-impeachment. Ask the former Speaker of Delta State House of Assembly. Of course, the next expected action will be for Independent Corrupt Practices Commission (ICPC) and Economic and Financial Crimes Commission (EFCC) to pounce on the ex-governor since there is no more immunity.

For democracy to work, we need a viable opposition that is not censored or overwrought with fear. Otherwise, the country might as well break up or the military take over again. Oligarchy is not a viable option to military dictatorship. Let us not kill our democracy with our own hands. As the Holy book says, 'the wise woman builds her house, But the foolish pulls it down with her hands.' (Prov. 14:1). Are we going to be wise or foolish in 2015?

*Rev. Akpodiete, a public affairs analyst writes from Asaba. He is also an aspirant for Udu/Ughelli Federal Constituency in Delta State. Contact him on 08138391661 or [email protected],