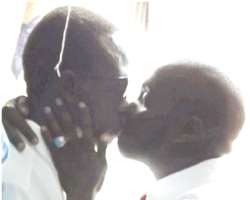 President Jonathan's recent assent to the Same Sex Marriage Prohibition Act has generated a lot of hoopla locally and internationally.

The embattled president who was hitherto under a sustained barrage of scathing attacks from political foes has received some respite as Nigerians – a whopping 92%- are said to approve of the overly intrusive – and I suspect partly unconstitutional - anti-gay law. Jonathan's stature is further boosted by the fact that he is seen to be bravely standing up to the meddlesome West.

One is therefore tempted to surmise that the contrived anti-gay uproar is a publicity stunt to shore up Jonathan's waning popularity and distract us from the more pressing problems our inept leaders have woefully failed to address.

In the same National Assembly that passed the anti-gay law, we have a serial paedophile, which is a far more grievous crime that ruins the lives of tens of thousands of our underage daughters across our Islamist North. These vulnerable little girls are denied proper education, dignity and the right to grow up, fall in love and choose their own spouse, just so lecherous perverts like Senator Ahmed Sani can satiate their vile paedophilic lust, leaving many of the underage girls damaged with VVF.

Instead of standing up for these hapless girls who are sold off like sexual chattel by their degenerate misogynist fathers to depraved paedophiles like Ahmed Sani, our feckless small minded legislators chase shadows, going after harmless soft targets like homosexuals who are consenting adults that endanger no one but themselves.

We are not a totalitarian nation, so government has no business legislating on sexual morality, which should be private matter. What next? Will fornication also be criminalized and the copulating lovebirds arrested because many of us disapprove of extramarital sex?

Although I am no lawyer, I am pretty sure parts of the recently promulgated anti-gay law are unconstitutional, and would be struck down if challenged in a court of competent jurisdiction. The law doesn't just ban gay marriage – which was already in our statute books - it criminalizes gay rights advocacy (free expression), gay people getting together and even heterosexuals who associate with gays.

In other words if your friend is gay, you could be arrested and prosecuted. This is in a country where it's no crime to be friends with drug dealers, murderers, rapists or paedophiles. Clearly such an over the top draconian law that infringes on our fundamental human rights to free expression and free association should be repealed.

One is therefore baffled at the public support of the Sharia-like anti-gay travesty by Lagos NBA chairman, Onyekachi Ubani who should know better: “Nigerians have the right to determine what we want in our country because we are a sovereign nation. Our culture supports sexual purity and natural means of conception. If you carry out a plebiscite today, you will see that majority of Nigerians are very happy with the law.”

If Onyekachi is truly a lawyer (I refuse to address the loudmouthed empty suit as Barrister), he should know that laws are passed to secure rights and safety of everyone in society, whether or not “majority… are happy with the law.” One of the cardinal objectives of democratic rule of law is to protect the rights of vulnerable minorities from tyranny of the majority.

This is why even though most Americans and other Westerners do not approve of homosexuality, they do not trample on the rights of gays & lesbians… although I wouldn't go so far as to redefine marriage as anything other than man-woman relationship.

It is noteworthy that despite the apparent unanimous support for the anti-gay legislation across the nation, only the Sharia states in the North are implementing it, as evident from the recent arrests in Bauchi. In essence Jonathan has just thrown the Sharia dogs up North a bone to keep them quiet, and hopefully whittle their strident opposition to his 2015 presidential bid.

With regards to the tired oft repeated mantra that homosexuality is not part of our culture – inanely parroted by our Senate President David Mark in his justification for the anti-gay law - I ask, which culture is homosexuality part of?

That people in the West are tolerant of homosexuality doesn't mean it is part of their culture. Same sex marriage was repeatedly rejected by Americans in all states where it was subjected to referendum. There's a reason many gays & lesbians in the West hide their homosexuality for years before 'coming out.'

Those peddling the lousy 'not our culture' casuistry should tell us whether Christianity & Islam are our cultures. Is electoral democracy also our culture?

Contrary to what the vociferous not-our-culture crowd seem to think, homosexuality is strictly speaking not a cultural fad, but a genetic psychosexual anomaly that afflicts people all around the world including here in Africa… which is why we have indigenous terms like dan dauduin Hausa. What differs among various cultures is the degree of tolerance.

Although our indigenous cultures strongly disapprove of homosexuality, the deployment of coercive machinery of governance to persecute and prosecute of gays was never part of any indigenous Nigerian culture I know of. That kind of bigoted intolerance is an alien prescription from the foreign religions (Islam, Christianity) our people have been brainwashed with.

Thus paradoxically, it's the nosy not-our-culture brigade who obsess about homosexuality and insist on prosecuting gays that are way out of line, and have gone against the grain of our indigenous cultures which respect personal space.