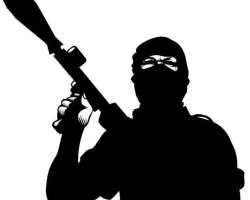 A recent Pew research poll of eleven countries showed that ISIS has its highest support among Nigerian Muslims. According to the November2015 poll , 20% of Muslims in Nigeria support the mass murdering savages and rapists known as Islamic State. This is nearly twice that of Malaysia (12%), the Muslim country with the next highest ISIS support.

Given that Muslims comprise roughly half of Nigeria’s 160 million people, 20% of 80 million Nigerian Muslims comes to about 16 million ISIS supporters. It goes without saying that the overwhelming majority of these 16 million “tiny minority of extremists” are in our religious violence prone core North.

One would think that with the ongoing horrific nightmare of wanton Boko Haram massacres, which has devastated large swathes of our North east and wrecked the northern economy, our Muslim compatriots up North would have learnt their lesson by now and steer clear off religious extremism.

Instead we are learning there may be up to 16 million supporters of our local ISIS affiliate – Boko Haram a.k.a. IslamicState of West Africa .

Reports also abound of NigerianMuslims heading off to join Al-Baghdadi’s Caliphate in Syria and Iraq, while our DSS recently arresteda local ISIS recruiter .

As if our ugly reputation as an underachieving nation of scammers and mind-boggling corruption is not bad enough, millions of Nigerian Muslims are intent on further rubbishing our already battered image.

Not only do we have the highest ISIS support, Boko Haram is adjudged the deadliest Islamist terror group on the planet, with a death toll surpassing its mother ISIS. On the international scene, Umar Farouk Abdulmutallab, the pantie bomber tried to take down an American airliner, while 2 Yoruba Muslims butchered a British soldier to death in London.

A few years ago, before America’s Seal team 6 took out Osama bin Laden, a Pew poll showed that most Nigerian Muslims (54%) supportedthe late Al-Qaeda terror leader . That was the second only to Palestinians in the global study. The same study found that close to half of Nigerian Muslims (43%) support suicide bombing.

For those of us living here in our Islamist north, none of this is surprising, given that posters, almanacs and car stickers of the late Al-Qaeda leader were quite popular here.

Some of our northern Muslims even jubilated after the 9/11 attacks on America, reigniting a just concluded ethno-sectarian clash in Jos back then in September 2001. And when U.S. responded by bombarding Taliban Afghanistan, Muslims in Kano rioted attacking churches and killing Christians in October 2001.

What more, in one of his propaganda tapes to Al-Jazeera, Bin Laden infamously mentioned Nigeria as one of the countries ripe for Islamic revolution. So it’s no surprise the Al-Qaeda spin-off, ISIS is a huge hit among millions of Nigerian Muslims.

With 16 million pro-ISIS Muslims in the country, we are not likely to see the end of its Nigerian affiliate - Boko Haram - anytime soon. Never mind the bogus claim by Buhari administration that the Jihadi insurgents have been “technically defeated”… whatever that means.

Even if Boko Haram is defeated, we still wouldn’t be out of the woods when 16 million of our Muslim compatriots believe it is alright to massacre, abduct and rape their fellow Nigerians on account of religious differences.

That’s a ticking time bomb that is bound to disastrously explode in the not so distant future. It would only be a matter of time for another Boko Haram, Maitasine or some other group of Islamist savages to resurface.

At best occasional eruptions of religious violence on the flimsiest of excuses would continue in our Islamist North as in the past. We cannot build a truly united “one Nigeria” with this kind of deep seated religious hate.

Northern leaders (religious and political) who hypocritically proclaim “one Nigeria” are largely responsible for this sordid state of affairs that is inimical to our continued existence as one nation.

They don’t seem to understand that in a religiously diverse country like Nigeria, where Muslims are not the clear majority, secularism is the only guarantee of peaceful coexistence for a truly unified nation.

Their fervent agitation for the limb-amputating stoning-to-death barbarism glorified as “total Sharia” in the early part of this political dispensation, whipped up the Islamist extremism that gave rise to the ongoing Boko Haram insurgency.

Back then in Borno, Ali Modu Sherrif allied with the local Islamist group (Boko Haram) to ride the Sharia wave to gubernatorial victory in 2003… enthusiastically voted in by Sharia-mongering Borno Muslims. They are now stewing in the boiling cauldron brewed by their own extremism and intolerance.

Anyone with half a brain could have seen this coming, given the prior history of religious violence in our Islamist north. But not the power hungry northern Muslim leaders who exploited religion for shortsighted political gain.

It’s the same sad story in much of the Islamist world. For decades Pakistan promoted Jihadist terror against India, and installed Al-Qaeda linked Taliban in Afghanistan, which was responsible for 9/11.

Most of the world’s leading Jihadi terrorists passed through training camps in Pakistan - 9/11 hijackers, 2005 London 7/7 bombers, 2004 Madrid bombers and Richard Reed, the shoe bomber. Pakistan even hid Bin Laden for several years until U.S. Seals took him out without notifying Islamabad.

Today Pakistan itself is ravaged by a destructive Jihadi insurgency with large swathes of the country outside government control.

For decades Saudi Arabia promoted Wahabi hate in mosques and Islamist schools it built and ran around the world. The Saudis along with other Sunni Gulf Arab nations also armed and funded the anti-Assad Jihad that later gave rise to ISIS.

Today, Saudi Arabia itself has been attacked by both Al-Qaeda and ISIS.

Even as Palestinians continue to revel in murderous Jew hatred, repeatedly spurning peaceful resolution of the conflict, they suffer grievous humanrights abuses under the tyranny of both Fatah and Hamas . Consequently polls show many Palestinians actually preferIsraeli rule … although they dare not admit it publicly.

The simple lesson here is that Muslim societies which condone and promote Islamist hate and intolerance, will eventually be consumed by it. Hence Muslims are themselves the number one victims of Islamic terror. In Libya, Syria, Iraq, Pakistan, Afghanistan, Somalia and even here in parts of northern Nigeria, it is largely Muslims killing fellow Muslims.

The sad part of it all is that these Muslim savages refuse learn from the adverse consequences of their intolerance, as Christians did in the Middle ages.

Consequently, even with the ongoing Boko Haram insurgency that has wasted thousands of innocent Nigerian lives, millions of Nigerian Muslims have doubled down in their extremism, as evident from their inexplicable support for ISIS.

And despite unconvincing denials that Boko Haram’s abduction and rape of Chibok girls was Islamic, we still hear disturbing reports of abductions, forced conversion and forced marriage of non-Muslim girls in our Islamist north.

It is long past time for religious and political leaders in our North to unequivocally come out in support of a secular Nigeria, and work assiduously to achieve it.

When northern state governments refuse to issue C of O to churches; run Sharia police (Hisbah) that arrests Muslims for not fasting during Ramadan, or confiscate and destroy alcoholic drink shipments belonging to non-Muslims, they are encouraging the religious extremism and intolerance that occasionally erupts in violence.

Today, largely because of the unwelcome intrusion of religion into politics, we can no longer talk of “one North”, never mind “one Nigeria.”

Kaduna, the former capital of the North is now partitioned into Muslim and Christian halves. Schools in our Islamist North are also largely religiously segregated. For several years Plateau has been a recurring flashpoint of ethno-sectarian violence.

In the same vein, when in 2011 Northern Muslims violently protested against GEJ’s victory, retaliatory violence against Hausa-Fulani Muslims only occurred in the North itself – Zonkwa, Kaduna state.

Not in the Christian SS/SE where GEJ hails from and had his largest support. Significantly, the SS/SE did not respond violently to Buhari’s 2015 electoral victory.

If the shoe had been on the other foot and GEJ had won the 2015 polls in a free & fair contest, would Buhari and his supporters have been that gracious in defeat? Given that the General had already threatened bloodshed - ‘kare jini, biri jini.'

Thus the politicization of religion has had devastating impact on our North and the nation at large. It has plagued us with a vicious 13 year Jihadist insurgency and further polarized the country along religious lines, thereby undermining "one Nigeria", as well as our fledgling democracy.

Most disturbingly, it has exacerbated Islamic extremism, with 16 million potential Muslim mass murderers threatening the fragile peace of our troubled nation.

Disclaimer: "The views/contents expressed in this article are the sole responsibility of the author(s) and do not necessarily reflect those of The Nigerian Voice. The Nigerian Voice will not be responsible or liable for any inaccurate or incorrect statements contained in this article."
Articles by Nafata Bamaguje
6-1-2016  Trump Is Right, Ban The Muzzies!19-11-2015  Amnesty For Boko Haram?17-5-2015  The Myth Of “moderate” Muslims23-3-2015  Still On Buhari Certificate Scandal6-12-2014  Ferguson MadnessMore...