Who Is Going To Save Africa From China’s Destructive War Of Occupation? 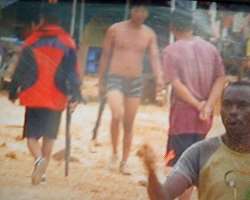 African leaders are the cheapest bunch of people in the world today, to compromise. China simply gave them a Greek gift, a building at the Addis Ababa AU secretariat in exchange for the license to annex Africa. China is using Africa as a waste basket. Caribbean countries are not spared. The African race is in danger of imminent extinction from Chinese greed and war of attrition and occupation.

Some White friends are alarmed that we are so naïve, we refuse to learn from our past. They are right; we have too many dim and confused leaders and family members.

…………………………………………………….
Every African receiving documents from me is free to post them on their timeline and send copies to everyone they can reach including our leaders, via e-mails, blogs, other internet groups, sites, or to newspapers to publish as a means of informing every African alive and

mobilizing us into one cohesive, aggressive, self-loving, single minded family.

…………………………………………………………
China is experiencing trade boom at the expense of the African continent, which has become the waste basket for Chinese rejects, reprobates, criminals, prostitutes and sub-standard goods. Products that China cannot export to Europe, America or Asia due to stringent quality control measures in those places are being dumped in Africa.

China has taken over all small mining holdings from native Africans all over Africa, including Ghanaian and Malian gold mines, Liberian diamonds etc. China now controls all of Africa's small and medium scale industries in a viciously unproductive way that is causing Africa untold hardship, pains, hunger, poverty and early deaths.

The Chinese do not employ locals, they smuggle their nationals in, and they do not pay appropriate taxes because their businesses are done in clandestine ways, difficult to access. Their products are all over the place but the Chinese are largely invisible, massing like hoards of animals in back rooms during the day to avoid detection by the authorities.

thereby destroying African local textile industries. The Chinese bring in several container loads of their stuff daily and have taken over the warehouses and front shops in our popular market places from our mothers who now sell Chinese wares on the streets outside the Chinese shops under umbrellas.

Arabs, particularly the Lebanese, did the same thing to us all over Africa in the early sixties. They monopolized our small and medium scale businesses as wholesalers and shop fronts for domestic items such as salt, pepper, oils, rice, yams, textile, drugs, drinks, kerosene, petroleum products etc.

They operated from the best business addresses of the time, such as at Balogun Street in Lagos. The battle to dislodge them from our small scale businesses was bitter and long, culminating in the military era indigenization decree.

A campaign (or war cry), in which I played a pivotal role. Of course, apart from the Chinese, Indian and Lebanese crooks continue to rule our domestic trade because although laws to stop them are still in place in most African countries, including Nigeria, African leaders are too busy lining their pockets to bother about what their greed is costing Africa and the African race.

Chinese products largely do not have names and addresses of manufacturers on them. They simply state made in China. They also do not usually have date of manufacture or expiry dates for perishable goods and drugs.

Their stabilizers, radios, electric bulbs, food blenders, fans, pressing irons, explode, two cases out of three, the first time they are switched on for use. The one that passes first time use test, lasts for only a couple of weeks. Antennas pack up after a few days use and Chinese cables are responsible for the now frequent fire outbreaks in African homes and offices.

Chinese batteries, first have to be charged for at least 24 hours non-stop, before use, and yet do not give more than a few minutes service at a time.

Mobile phone batteries need to be charged every two hours at least. The best of Chinese laptop batteries provide the maximum of 5 minutes back-up service in the first week of use and progressively drops to a minute before it packs up in five months at the most.

Biro pens write just one word or sentence before it stops flowing even though there would seem to be ink in its tube. At first I thought retailers were filling the tubes with normal ink and I accused a seller, only to find that that is how they bought them from the Chinese. You need to strike ten, fifteen Chinese matchsticks, to light a fire.

While writing this piece, I decided to check out a shop selling mainly Chinese toothpaste because according to the shop owner, customers patronize them because they are cheap. While the quality toothpastes manufactured locally sell for about a dollar per large tube, the

Chinese toothpastes of similar size sell for about ten cents.

I opened a tube to try to squeeze its contend out and its supposed paste was as hard as an iron rod and it hit the ground like a large stone. Soles of Chinese shoes drop off when used to walk in the rain or through flood water. Shirts smell badly, cause sores on the skin, and tear after one or two wash. Jewelries fade or go black on contact with water or the sun.

In 2007, authorities in Europe, the USA, New Zealand, alerted the world that the Chinese were using 900 times the United Nations' safe level of the chemical called formaldehyde to treat the clothes they were exporting, A Target TV programme in New Zealand claimed that Chinese fabrics in children's clothes being sold in New Zealand, contained 900 times the United Nation's safe level of the chemical.

Formaldehyde is used to stop mildew. It causes skin irritations and cancer.

Probes in the USA and Europe showed that formaldehyde was only one of the problems, other safety level scares were unmasked in other Chinese export goods including food and made in China toys that contained toxic lead paints and strong magnets.

Governments around the world, including the USA and Europe, imposed bans and or mandatory safety standards on Chinese goods, and Chinese toy companies like the giant retailer, Mattel, said in early August, 2007, it was recalling 18.2 million toys globally because of hazards, such as the use of lead paints and strong magnets.

Recall in essence simply meant, re-loading them for Africa where, even if safety standards were in place, a few dollars' bribe was all that was needed to compromise the laws. The US authorities warned Africa against grave health risks, in August 2007, from the banned deadly and sub-standard goods, including used clothing that China had re-directed and shipped to Africa.

The alarm was described as the latest safety problems affecting Chinese goods, which had spread from toys to textiles. American health Department said scientists hired by the consumer watchdog programme discovered formaldehyde in Chinese clothes at levels of up to 900 times regarded as safe.

Manufacturers sometimes apply formaldehyde to clothes to prevent mildew. Officials stated that most of the affected textiles are shipped to Africa, where there is little government oversight on the booming second hand clothing.

The chemical can cause skin rashes, irritation to the eyes and throat, allergic reactions and cancer. The Chinese authorities did not show any remorse at the time. Rather their Mr. Li Changiiang, head of

China's safety watchdog at the time, claimed that the product safety scares were “a new trend of trade protectionism,” and accused some governments of demonizing China products.” What he deliberately did not say, was that China does not sell the deadly products she dumps in Africa, to her citizens at home.

China pretends to be a friend of Africa to quietly take over the continent's economy and dump her excess population. It is estimated that China has already smuggled over one hundred million Chinese into Africa in the last ten years alone. China smuggles her nationals into Africa through containers and other clandestine routes such as dropping them off on the high seas at night for local speed boat agencies' facilitation.

They take over obscure estates on the outskirts of town and turn them into Chinese enclaves. You do not see too many of them milling around during the day. You see their cheap products everywhere but not much of the Chinese themselves because they live and sleep twenty or more in a back room behind the front shops.

The women prostitute and charge our morally bankrupt elite up to USA $5,000 for a one night stand. These are unsexy looking, rigid, tiny, species, stunted in growth by years of savage communism.

Why would our leaders, blessed with millions of the most shapely, sexy females in the world, hanker after male looking tiny females, you might ask? Perhaps it is to find out if their cunts are slanted like their eyes.

Curiosity kills in many ways, including using more of African tax payers' money to buy more deadly Chinese goods to kill us all off quickly.

Package C (i.e., the Games Village), of the Abuja national stadium contract was awarded to a company called CCEC that appeared to have been the most corruption ridden of the three companies that handled the construction of the stadium and it was the least efficient.

Our governments give contracts to the Chinese because they do not only bid cheap, they cut the government agents in big. A bridge built by a Chinese company called the CCC, in urban Lagos some four years ago, dragged for years beyond agreed completion date, and collapsed the day after it was commissioned.

China was backing Sudan to steal South Sudan's oil until South Sudan blocked the deal last year. China is backing the Sudanese government and Sudan's Janjaweed militia right now to wipe out the Black population of Darfur and expropriate their lands.

A study in 2008 on foreigners' recent land acquisitions in Africa by GRAIN, a non-governmental organization, suggested that some 40mn hectares of farm land have been grabbed by foreign interest groups in Africa.

The report claims that the scale of the leases is unprecedented and that they do not have complete data on the cases because of the secrecy surrounding the deals. Commercial enterprises, many of them European as well as Chinese companies have been in the lead in cultivating Jatropha, Sorghum, and other bio-fuels, in countries such as Madagascar, Mozambique and Tanzania.

Indians too are moving into Africa. Their companies, backed by their government, have

bought hectares of land in Ethiopia and other African countries, to meet rising domestic food and animal feed demand in India.

The Chinese have negotiated 2.8mn hectares lease in the Democratic Republic of the Congo to grow oil palm, and a further 2mn hectares in Zambia, to grow Jatropha (a crop used for bio-fuels). In Mozambique, local opposition to a Chinese project to develop 100,000 hectares was based on plans to import Chinese labour. China sees Africa as virgin land to relocate some of her teaming population.

Are we a cursed race? Why are we incapable of ending our nightmares in the hands of all sorts of muckworm tribes, green, yellow, pale, blue?

Poet, Author of the magnum opus: 'The end of knowledge'. One of the

Commissionership, County of Shelby, Tennessee; and a silver shield

trophy by Morehouse College, USA, for activities to unite and uplift