Why Should White Gods Listen To Africans? 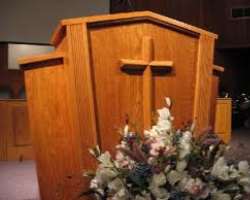 Africans are the most pious bunch of Homo sapiens in the world right now, judging by our total surrender to prayers as the answer to all our problems. We are the only group of people on earth expecting God to climb down from heaven to run our governments, businesses and domestic affairs for us.

The vogue is to do nothing for ourselves because some devilish extraterrestrial God will fill the pot-holes on our roads, provide us with regular electricity, create jobs for the jobless, put drugs in our run-down health clinics, and books in our empty university libraries, if we pray hard enough.

Some smart guys, capitalizing on our naiveté, have set up what is now the only viable

and lucrative industry in our society. Unproductive and contributing nothing to national productivity, but the religious leaders collect tithes to buy private jets, set up universities, own banks, acquire fabulous estates around the world and parade rosy cheeks, while their flocks sink deeper into abject poverty and squalor.

conniving evil God before embarking on their operations. Our rouge leaders, who divert our resources into their private accounts abroad, pray to the same God, to succeed. Lazy civil servants pray to God for promotions in their jobs.

Our media is not left out of this God disease, or acute religious madness. We have the most unimaginative media in the world, stifling, demoralizing, and uninspiring. Television and radio stations bombard us all hours of the day with fake religious preachments and garbage.

The newspapers and magazines are without exception cheap and vulgar rag-tags, using alien religions to engender self-hate and self-destruction. Every sentence published is laced with God this, God that. Imagine the New York Times, or Washington Post, or the Manchester Guardian, being pre-occupied with God in modern times, when their scientists are already building colonies on the Moon.

Our editors generally are now all clerics, and their editorials rely on quotes from lie soaked religious books to make largely senseless points. They are not interested in scholarship or in challenging the world of ideas. So, for the intelligent person, the environment is not only numbing and suffocating to operate in, it gradually turns one into an illiterate from lack of intelligent mental engagements and challenges.

Our schools are no better. Students, poorly prepared for their exams, pray to pass. Our kids spend more time on their knees praying than to sit and study. In fact, our children are at home at the moment doing nothing but praying for the Minister of education to see reason and

The Minister is adamant; he says, teachers are saboteurs out to derail the programmes of government. If the Minister is wrong, is he defying God?

He is about to throw the teachers out of their homes and jobs, despite our fervent prayers. We

prayed desperately through the era of slavery and colonialism, and we have remained on our knees since, praying.

If it is change of leadership we have been praying for, a worse one seems to take over every time. Right now, we are the most wretched group of people on the face of the earth, not for lack of natural resources or trained manpower. Obviously, God is not a fool.

Eight hundred million Africans are praying to no avail. Most African leaders leave governance to 'God' while concentrating on supervising their open and systematic carting away of national resources into their private accounts abroad.

Heads or tails, the African masses lose all the time. They have no hiding place. Were the imperialist slave merchants to surprise us in the morning by apologizing for slavery and colonialism, in cash or kind, their handouts would end up in the Switzerland private accounts of their agents ruling us, only for us to borrow the money back again and again at enormous interest rate to perpetuate our subjugation. It is a catch-22 situation.

Less than 3 in 10 people in the world claim to believe in, or worship Yahweh or Allah, but the worshippers are the most vocal, because their systems dominate the world's elite media. The worshippers range in social status from the absolute richest to the poorest of the poor of

humanity, structured (by the IMF and the World Bank), punitively and mercilessly along racial divide.

stranglehold on the majority poor natives of the world's richest most fertile lands.

Africa is right now submerged in absolutism, carefully crafted and controlled by the G8, to force natives to turn to their 'Yahweh God' that is supposed to be outside human control, for possible kinder laws and sanctions against our alien and local abusers, thieves, assassins,

rapists, hoodlums, tormentors, and their agent rogue leaders, praying to the same 'God.' Natives turn to the seemingly inexpensive and glamorized alien 'God' or 'Allah,' at the most trying times of their lives, out of helplessness and frustration.

The reasoning being, it is the fad, (and it seems to be cost free), and if human laws can be

so unjust and unkind, there must be superior laws to which humans can appeal for justice, because something must be responsible for the order in the universe. After centuries of alien religious brainwashing, African victims cannot help seeing a being or spirit sitting up there in the sky, manipulating the affairs of the universe, making people ill, until they pray for forgiveness to get well again, impoverishing people, to get a chance to reward a few loyal ones, and

so on. That must be a very wicked and vain God indeed.

Even then, such a God would be deaf or bored stiff by now, listening to the supplications of even just a hundred and fifty million Nigerians, who use noisy loud speakers in places of worship, let alone eight hundred million Africans and everyone else on planet earth, our Milky Way, Galaxy, and the entire universe, begging without respite for God's undivided attention in trillions of diverse tongues.

Disclaimer: "The views/contents expressed in this article are the sole responsibility of the author(s) and do not necessarily reflect those of The Nigerian Voice. The Nigerian Voice will not be responsible or liable for any inaccurate or incorrect statements contained in this article."
Articles by Naiwu Osahon
25-3-2013  Why Should White Gods Listen To Africans?16-3-2013  If Africans Are Not Stupid, Why Are We Allowing Idiots To Think For Us Today?14-3-2013  Naiwu Osahon’s Theory On Who Controls The World, God Or Satan?14-3-2013  Naiwu Osahon’s Theory On Human Origin6-3-2013  Who Is Going To Save Africa From China’s Destructive War Of Occupation?More...