THE TRUTH ABOUT THE HOLY GRAIL. 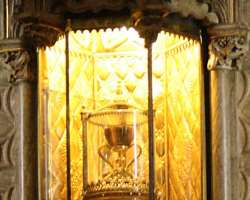 According to testimonies, the Talmudic tradition, and A.C Celsius, an encyclopaedist, there was a Jesus ben Panthera between (100 – 50 BCE.) He was the son of a Roman soldier and a Jewish prostitute. He claimed to have been a miracle worker and briefly plied his trade in Judea. He may have been stoned to death for impersonating Horus, the 'Divine One,' and claiming to be his reincarnation, when everyone knew his family background.

The Talmudic tradition's vague memory is not identifiable with the Gospel figure. It emphasizes that “the Christian religion partially modeled their Jesus of Nazareth (that ought to be mythic) on distorted knowledge about historical ben Panthera.”

Panthera died in 50 BCE, well before the Roman control of Judea. The Romans claim that the crucifixion of Jesus Christ took place between 26 CE and 36 CE, during which time, Pontius Pilate, the Roman Procurator (Prosecutor) and his boss Lucius Aelius Sejanus, the Prefect of the Praetorian Guard, were the Roman Imperial officials in Judea. No crucifixion of any body could have taken place in Judea at the time of Roman control, without the sanction of these officials of the Praetorian Guard. So, if they didn't do it or sanction it, as the Romans are claiming, then Rome was lying against the Jews to fuel their hatred.

Panthera was totally an inconsequential person. In fact, he was considered a nuisance and treated as a common criminal and street beggar, that is why proper records were not kept of him. He was only mentioned in passing, in the Talmudic oral traditions. Therefore, the shroud wrapped around his corpse (if there was one) could not have meant anything to anyone, not least the Catholic Church that did not come into existence until 375 years after his death.

Definitely, it would have meant nothing to “Joseph and his family,” apart from the fact that they would have lacked the sense and technology to preserve it for 375 years for the Catholic Church. Did they give shreds to the Catholic Church? The shroud of Torino or Turin, in carbon 30/33, shows a recent dating, confirming that the Roman Catholic Church did not do a good job of producing a hoax to convince the world.

Also, the birthday of Jesus was often put at between 4 – 1 BCE. Octavian Gaius Augustus Caesar (63 BCE - 14 CE) issued his 'Census edit' in 8 BCE. If Jesus was born in 4 BCE or 3 BCE or 2 BCE or 1 BCE, he could not have been a new born baby at the time the 'Census edit' was issued some four, five, six, seven years earlier.

Mary Magdalene's story was, therefore, cooked up. There is no iota of truth in the claim that she was pregnant for Christ at the time of the supposed crucifixion or that to protect the unborn child, she was smuggled out to Gaul through the help of Christ's trusted uncle, Joseph of Arimathaea, because there was no Jesus Christ.

In Gaul (France) with the protection and support of the Jewish people that were supposed to have killed her husband (the Church must think all humans are nincompoops), Mary survived and gave birth to Sarah whose bloodline thrived quietly in France, and in the fifth century intermarried with the French royal blood that produced the Merovingian kings in Paris. Some story. Could the 'impeccably divine Jesus' bloodline have thrived any less in the Church fathers' fertile imagination?

With the assassination of Dagobert, a Merovingian, stabbed in the eyes while asleep, in the late seventh century by the Vatican, with assistance from Pepin d' Heristal, the son, Sigisbert, who escaped the attack, continued the family lineage, which led to King Godefroi de Bouillon. King Godefroi de Bouillon founded the Priory of Sion in Jerusalem immediately after conquering the city in 1099 CE and charged the Priory with protecting his secret, which obviously must have been the rumours fanned by the Catholic Church about his bloodline (link) with Jesus.

The Priory secretly heard about a treasure trove of hidden documents buried beneath the ruins of Herod's temple, which was built on top of the earlier ruins of King Solomon's temple. The documents, of course, were of considerable interest and concern to the Church, ready to do anything to reach and destroy them, if they knew where they were hidden. The Priory de Sion believed that the documents could provide corroborative evidence for Godefroi's family secrets and so vowed to recover them from beneath the temple at whatever cost in time and expense.

The Priory created a military wing of nine Knights called the Order of the Poor Knights of Christ and the Temple of Solomon (i.e. the Knights Templar) and disguised as protectors of pilgrims in the Holy Land. During the reign of Baldwin II, the Templars were in the Holy Land protecting Christians on the roadways and because they were sworn to poverty, they were not being paid for their services. Their request of King Baldwin II, to be allowed to shelter under the ruins of the temple was granted so they took up residence there.


The documents they were after were supposed to be buried in the Holy of Holies, a sacred chamber where God Himself resides. In other words, the documents were in the heart of the Jewish faith. Why would the Jews bury documents concerning inconsequential Panthera, or of Jesus Christ that to them did not exist, in their most sacred place?

The Knights lived in the ruins for nine years, excavating secretly through solid rock. Their treasure trove is speculated to include, apart from documents, precious items in gold, silver and diamond from the abode of God. They took their treasure trove to Europe where their influence, power and wealth soared overnight, helped by Pope Innocent II, who issued a papal bull granting them autonomy as an independent army over and above the influence of the state and the Church. Some historians believe the Knights must have blackmailed the Pope or that the Pope was trying to silence them from revealing their findings.

The Knights soon amassed colossal wealth and posh estates located in a dozen countries. They began giving credit lines to bankrupt royals and charging interest, which is the nucleus of the modern day banking system. By the 1300s, the Knights had become so powerful and rich, Pope Clement V felt he had to do something. With the collaboration of King Philippe IV of France, the Pope set off an operation to destroy the Knights. He sent his priests/military commandants across Europe, sealed letters to be opened simultaneously on Friday 13 October, 1307.

The order when opened on the appointed day and time, lied that the Pope had been visited by God in a vision and that God had told him that the Knights were heretics, devil worshippers, homosexuals and sodomists, blasphemous in character and defiling the cross. Thousands of Knights were rounded up, tortured and burnt at the stake on that day, which makes the day rankle even in modern times as the unlucky Friday the 13. Despite Clements's best efforts, some Knights escaped into exile with the help of powerful allies.

The Knights' parents, the Priory of Sion, who were only targeted later, had been entrusted earlier with, not the gold, silver and diamond urns etc., but the documents and artifacts; were able to smuggle these out at night from a Paris preceptory into Templars ships in La Rochelle. The last time the secret treasure trove was sighted was in 1447 when a fire outbreak almost consumed it and was seen by several eye witnesses being moved to safety in four huge chests each carried by six men. Current speculations about what the treasure trove contains include some ancient Egyptian Mystery System materials; documents and artifacts about early stages of kabbalism and the Jewish religion, remains linked with some of their earliest religious icons, and information about their persecution by the Romans and others. The treasure trove's last suspected abode was the United Kingdom, the land of King Arthur and the Knights of the Round Table.

There were strong speculations about the possible release of the secrets at the end of the astrological Age of Pisces the fish. Two thousand years of spiritual fervent; of nurturing and spoon-feeding by higher forces because man is incapable of thinking for himself. The treasure trove was not released because there was nothing to release but how the Roman Catholic Church was blackmailed. Now that we have entered the Age of Aquarius, the water bearer, a period when we should be able to think for ourselves, I believe the treasure trove is back home now at its final resting place in Paris, buried under (Francois Mitterrand) the Sphinx's brand new La Pyramid.

Humans have no need for religions

Because African faiths and spirituality are being used largely for evil, they are retarding our progress as a people. We must keep our cultures and traditions but not our faiths in their present forms. We must refine and modernize our faiths and wean them of their evil practices if they are to survive in any form. All religions are being used for evil and if we cannot serve our own Gods, why must we surrender our faiths to White and Arab Gods? We do not need religions anyway. We have no business being Christians because Christianity is a lie and is exploiting our people to death with tithes. Have you not seen pastors buying private jets? And along with Islam, we spend too much time on our butts and knees praying instead of on our feet working. Our benefactors have us where they want us, which is down here on our knees begging and praying for their hand-outs while they are challenging 'God' and partying on the Moon. And what precious little time we struggle to squeeze out of our wretched existence, we devote it to fighting and dying over our masters' myopic wars. Forget about Jesus, forget about Muhammad, forget about spirits and if you must worship something, worship intellect, worship bravery, worship brainpower, worship knowledge, worship scholarship, that is what the Myk is about.