Jerry Rawlings On The Enlightenment Cylinder 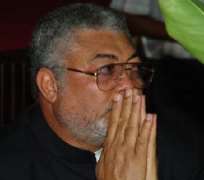 Suddenly, ex-President Jerry Rawlings has had epiphany about the on-going Ghana/African enlightenment movement. Face-to-face with some lethal cultural inhibitions that have been demeaning Ghanaians'/Africans' humanity, Rawlings, in the manner of Archimedes and Isaac Newton, exclaimed "I need an explanation."

For long, some wrong-headed spiritualists have made it their craft to accuse children and old women as demonic, who are responsible for their alleged victims' existential adversities. In the process, the spiritualists and their accomplices have subjected the accused women and children to bizarre torture, trauma, death or banishment.

These, against the backdrop of a culture certain parts of which believe heavily in the dark juju-marabou, witchcraft, demons and evil spirits as responsible for the Ghanaians'/Africans' problems. Cleverly, the inhuman spiritualists have been exploiting Ghanaians/Africans to their good souls, gleefully manipulating them to their will. Such counter-productive spiritual believes are so worrisome that the Ghana national soccer club, the Black Stars, who failed to win the just ended African Cup of Nations in Gabon and Equatorial Guinea, coach Goran Stevanovic has revealed in a leaked report that the deep divisions within the team that undermine their progress is as result of some players using witchcraft against their team-mates.

It isn't that Rawlings hasn't seen or read about such obscure believes and their impact on Ghana's/Africa's development process. One, Rawlings comes from a region, the Volta, where high incidence of the destructive juju practices has partly stifled the regions' progress. Most investors scared of the juju practices, avoid the region. Second, Rawlings, as military Head of State, banned the dreaded trokyosi, a cultural practice in certain parts of the Volta region, where teenage virgin girls are enslaved to shrines for sins committed by their parents or guardians.

In the face of all these and the rough rides of his bloody revolution, there was no epiphany, despite the huge room Rawlings had to mount a grand African enlightenment revolution that draws from African traditional values and the global prosperity ideals.

Rawlings' actual epiphany came when he read the Accra-based state-owned Ghanaian Times story of a 6-year-old house-maid who was imperilled by a 29-year-old woman, Jennifer Mensah, who was told by a spiritualist that the girl was possessed by demons and should be exorcised. But for the police who rescued the 6-year-old, she would have been either tortured to death or traumatised. The 6-year-old's ordeal stroke Rawlings, creating a sudden realization of the inhumanity emanating from such erroneous believes within the Ghanaian/African culture.

An epiphany! Rawlings abruptly on the enlightenment roll! With his old age, immense gravitas, ruling Ghana for almost 20 years, and his ability make remarkable noise (otherwise called "Boom"), Rawlings has seen the values that wheel Ghanaians'/Africans' development process. He is a perfect helping hand to the on-going Ghanaian/African enlightenment undertaking that need more positive noise and grandstanding.

By yelling "I need an explanation" about how a 6-year-old can be accused of being so demonic that she is responsible for a 29-year-old's earthly challenges, Rawlings has pragmatically given essence to the enlightenment movement. Rawlings asked Ghanaians/Africans to "think"! Like Archimedes and Isaac Newton, Rawlings has "found the last piece of the puzzle and now sees the whole picture" in the grand attempts to free the Ghanaian/African from erroneous cultural believes that have entangled their free will.

Having read about the activities of the enlightenment campaigners, pondered about them, and embroiled in the rough-and-tumble of the Ghanaian/African development progress, Rawlings is illuminated by the deeper truths of the enlightenment arguments. That the destructive inhibitions within the Ghana/African culture should be refined through an enlightenment process. That the enabling aspects appropriated for policy development. Rawlings is convinced by the numinous foundational frame of references argued by the enlightenment campaigners over the years - that like any other parts of the civilized world, African culture should drive Africa's progress, and in doing so; attempts to refine the gloomy parts of the cultural practices that asphyxiate Africa's progress.

Rawlings' illumination isn't an "out-of-the-blue, flash of inspiration" on an issue he hasn't thought about before. Rawlings asked feasibly, how can witchcraft "victims, mostly old ladies and children were sometimes banished from their localities and taken to "witches' camp" for confinement"?

Humanly, Rawlings' questions are right; we all need explanations as to why in 2012 we excitedly point our fingers to witchcraft for our mortal, developmental difficulties. In Rawlings' meditative pondering, Ghana/Africa needs thinkers who would be able to reflect intensely from within their traditional values as grand strategy that would expose the inhibitions within the African culture for refinement and appropriate the enabling aspects for policy development.

Despite Rawlings' agitated revolutionary tussles that was supposed to deeply refine all that hinder Ghanaians' progress, a good number emanating from certain aspects of the Ghanaian culture, 20 years on, most Ghanaians still blame witches and evil spirits for their mortal predicaments. As the national soccer team, the Black Stars, recent failure has revealed, witchcraft or juju is a national problem. Rawlings' revolution, initially supposed to have been the enlightened one in Africa, should have burnt out all these culture inhibition nonsense, making the average Ghanaian able to rationalize development issues much better today than 20 years ago.

The Rawlings revolution should have laid the striking foundation for an eventual enlightenment revolution. It didn't happen - because either there was no epiphany or Rawlings and his associates had no deeper grasp of the values that wheel Ghana/Africa. Most epiphanies take long, long time to occur. It comes from long labour. The enlightenment movement have helped awakened Rawlings to the need to use his rich revolutionary background to help boost the enlightenment campaigns. As much as everyone knows, Rawlings is a good campaigner for genuine cause. The enlightenment struggle is worthy cause for Rawlings for the rest of his life.

Rawlings sees those exploiting the gullible masses' spiritual insecurities as "crooks," assuming to themselves enthralling spiritual designations such as "Prophets", "Head Pastors", "Apostles" and "Evangelists" to exploit the naiveté of those who have "branded their grandmothers, mothers and children of other relations witches and consigned them to physical torture, under the pretext of exorcism." Lurking in the background are the much-feared juju-marabou spiritualists who have ancient hold over the nervously superstitious masses, especially the elites.

Rawlings has come a long way. His epiphany isn't spontaneous. Like the enlightenment campaigners, Rawlings realization that certain destructive aspects of the Ghanaian/African culture should be refined is the result of significant labour - with Ghanaian journalists in the forefront. And it is going to be long, tough campaigns before any satisfying result will be reached. As Rawlings involvement in the enlightenment crusade reveals, there are going to be surprises and not knowing when the campaigns will bear fruits fully. But as more prominent people like Rawlings get involved, there will be greater spread of the enlightenment message against the inhibiting cultural values as innovations strategy to drive Ghana's/Africa's greater progress.

Rawlings will be an admirer of Scott Berkun's The Myths of Innovation that argues that "our subconsciousness can play a significant part in delivering the solution" that will refine the absurd parts of our cultural values. Once again, it is going to be a dyspeptic enterprise. Let no one kid us, for most of the unhelpful traditional values have been there hundreds of years and they won't just go away. But as the German philosopher Friedrich Nietzsche explains in On the Genealogy of Morality, Rawlings, with his strength and retirement and his privilege position, has all the room to contemplate unobtrusively on the intersection between the enlightenment movement and the Ghanaian/African culture.

Rawlings' agonisingly question, "Why don't these villains of pastors who identify only old women and children as witches extend their services to the men fold? "Why are there no wizards' camps but always witches camp? I need an explanation from these so-called men of God who often put the Bible under their armpits pretending to be serving God, and saving souls . Why should their falsehood tend to mesmerize us? Don't we think?"

The fact is the average Ghanaian/African thinks but the thinking is largely entangled in the culture they were born into, parts of which are mired in untruth dictated by their culture. All the same, the seeds for an eventual African enlightenment revolution are on the move. The Nigerians say, "One generation plants a tree - the next one enjoys the shade." Realistically, it has always been like that, for all human progress.

Disclaimer: "The views/contents expressed in this article are the sole responsibility of Kofi Akosah-sarpong and do not necessarily reflect those of The Nigerian Voice. The Nigerian Voice will not be responsible or liable for any inaccurate or incorrect statements contained in this article."
Articles by Kofi Akosah-sarpong
4-11-2012  No Dogma Or Purity Among The Political Parties25-10-2012  Dangerous! When Medical Doctors Believe In Witchcraft16-7-2012  Service Delivery, Traditional Institutions, And Inequality30-4-2012  Ghanaians’ Dangerous Tribalism, Resolving The Misunderstandings27-4-2012  Traditional Deities Clash With Development ProjectsMore...