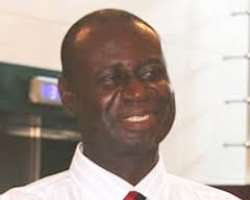 Taxi drivers, whose illegal parking lots are being reclaimed for re-developed into modern markets by the Kumasi Municipal Assembly (KMA) has resorted to the invocation of traditional river deities, such as the much feared goddess, Antoa Nyama, to strike the KMA mayor Samuel Sarpong to death.

As an Asante growing up in traditional settings in Kumasi, the invocations of Antoa Nyama normally send tremor and awe. A person cursed with Antoa Nyama lives in perpetual apprehension, until he or she counters it with his or her version of the story to the deity. The belief is that, the river deity can strike you dead instantly or make life miserable for you.

Even in Mayor Samuel Sarpong one can sense some anxiety from the Antoa Nyama curses heaved on him.

You don't have to be traditional metaphysician to analyse Mayor Samuel Sarpong: “The Kumasi Metropolitan Assembly says it is undeterred by the invocation of curses on its officials by transport operators over construction works at the Kejetia Lorry Terminal … I am staunch Christian well covered by the blood of Jesus Christ therefore the invocation of river gods and other deities to hurt my life will fail,” said Mayor Samuel Sarpong, revealing certain waves of spiritual insecurity and fear. “I have done no wrong, so the invocation of the deities against me will not work.”

Mayor Samuel Sarpong is an Asante and have been socialised into the Antoa Nyama belief, as part of the Asante cosmology. No doubt, despite being older with university education and supposedly sophisticated, Mayor Samuel Sarpong still exudes certain degree of fear of the river deity. “I am staunch Christian well covered by the blood of Jesus Christ therefore the invocation of river gods and other deities to hurt my life will fail.”

Yes, but in this contest, Mayor Samuel Sarpong could, traditionally, counter the taxi drivers' curse by praying to Antoa Nyama to either mediate or ignore the taxi drivers' oath by telling the deity that a modern market is to be constructed and that the taxi drivers were using the disputed lots illegally.

The taxi drivers' use of traditional deities isn't characteristics of all Asantes. Perhaps the taxi drivers didn't get enough information about the market projects or they weren't involved in discussing the projects. Not all Asantes invoke river deities as curses to impede development projects.

Like anywhere in the world, some development projects could cause protests from varying reasons but that doesn't mean those involved in the project should be threatened either spiritually or physically. The most civilised action by the taxi drivers is suing the Kumasi Municipal Assembly on the issue so that they could decide on the outcome. And not throw curses and threats of death which larger consequences nobody knows.

Like most on-going projects in the Asante Region, the massive Kumasi Sun City scheme, which construction is underway, didn't incur the anger and traditional spiritual curses of the large traders who were operating at the site – the former Kumasi Race Course.

While some of the traders, who were relocated to a new site, belief in traditional river deities such as Antoa Nyama, they were able to balance the larger socio-economic outcomes to be generated by the Kumasi Sun City project – jobs for their folks, attracting international investors, boosting tourism, and the development of other socio-economic infrastructure - against their traditional spiritual believes to stop the Sun City project.

Freed from any attempts to summon any traditional river deity to strike the investors to death or put them in spiritual nervousness, the Kumasi Sun City project, a replica of the one in South Africa, when finished “will be a multi-purpose world class facility comprising a shopping mall, banks, insurance building, an amusement park and fitness centre, a five-star fully-equipped international clinic with an ambulance station and a helicopter pad.”

The Kumasi Sun City project “will also have doctors' bungalows and other ancillary staff quarters, a five-star hotel, 240 semi-detached executive houses within eight gated-communities of its own with each community having its own swimming pool and tennis court.”

Like most deities the world over, Antoa Nyama could be entreated for progress and, at the same time, for retribution. But how this two attributes play into the taxi drivers and Mayor Samuel Sarpong mesh is a question development expects are to answer as Ghanaians/Africans progressively modernise and their culture increasingly enter their development processes.

The reality is that Antoa Nyama is two-faced: she could be prayed for progress and she could also be invoked for punishment.

How does development expects get involved in this Antoa Nyama-taxi drivers-Mayor Samuel Sarpong tangle in such a way that the constructive aspects of the traditional deity is made to outweigh its supposedly destruction parts for progress, so that modern markets or a Kumasi Sun City project could be undertaken without making trouble with the Ghanains'/Africans' cosmology?

The answer lies in real dialogue in development planning in such a way that Ghanaian/African tradition is integrated deeply into the project planning. In Tradition, Culture And Development in Africa: Historical Lessons for Modern Development Planning (2006), Ambe J. Njoh, a professor in the Department of Government and International Affairs, University of South Florida, USA, argues that one of the reasons why Africa lags behind in development is the lack of African culture in Africans' socio-economic planning, which is still driven by overly Euro-centric paradigms.

In the twists-and-turns between the taxi drivers, the traditional river deity and Mayor Samuel Sarpong, we get a sense of why Africa continues to lag behind all regions of the world on every indicators of development. The missing link is African culture in socio-economic development planning.

Disclaimer: "The views/contents expressed in this article are the sole responsibility of the author(s) and do not necessarily reflect those of The Nigerian Voice. The Nigerian Voice will not be responsible or liable for any inaccurate or incorrect statements contained in this article."
Articles by Kofi Akosah-sarpong
4-11-2012  No Dogma Or Purity Among The Political Parties25-10-2012  Dangerous! When Medical Doctors Believe In Witchcraft16-7-2012  Service Delivery, Traditional Institutions, And Inequality30-4-2012  Ghanaians’ Dangerous Tribalism, Resolving The Misunderstandings18-4-2012  The Enlightenment And The Ghana Culture DayMore...