Married To Terrorists: I Don't Know How To Pray For Those Girls With Boko Haram 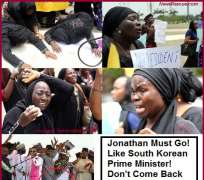 It is like my daughter is with them. It is like I know all the over 200 girls in Babylon. No, theirs is no Babylon. Theirs is hell. Every day of my life, I remember these girls and I can imagine what they are going through, even right now!

I know they were captured, not just to shield the insurgents from immediate reprisals by the military, but also for domestic work and sexual reasons.

I can imagine those girls, 16, 17... the oldest perhaps 20, being sexually assaulted everyday!

I can imagine some of the girls, out of fear of being killed, allowing the evil people to have their ways with them. I can imagine the mercilessness with which the criminals would force themselves into the girls, some of whom would still be virgins!

I can imagine a small girl, who must have thought of the first sexual experience with her own husband some years to come, experiencing it now with criminals, with a man she never desired, on a bare floor of a cursed forest, an environment polluted with guns, mortars, bullets, filth, sorrows, tears and blood.

I can imagine some of the girls, trained from home, with scruples, saying "NO Way! Kill me. I won't allow you to violate me."

I can imagine such girls being forced to the floor ... and the girls struggling with them, shouting "Kill me... kill me… you can not violate me. You can't violate me… I rather die!"

I can imagine Shekau, the head of Boko haram responding with anger... "I will kill you." He picks his gun and shoots the little girl. And as the girl passes out, she heaves a sigh of relief, saying... "Better to return to my God in purity!" And she dies.

I can imagine innocent girls, virgins being infected with diseases ... out of no fault of theirs, but the ill luck of being Nigerians, a country ruled by morons! I can imagine some of them, being tied, hands and legs, so they will not escape. I can imagine the girls so dirty, since they have no new clothes to wear! No sanitary towels to use!

I can imagine Nigerian senators, representatives, senate president, speaker, Sambo, Jonathan, all of them, feeling unperturbed, drinking tea, laughing in their offices, deceiving themselves that the Nigerian Military is on top of the situation!

What a Nation!
Anytime I kneel down to pray, the pictures of these girls come up and I just don't know what to say to God!

In your church or Asalatu today, say a word of prayers for them.

Written by a sister and mother.